On October 2, 2006, a lone gunman entered an Amish schoolhouse in Nickel Mines, Pennsylvania, and opened fire. "The Amish Project," a 2009 play by Jessica Dickey, is a fictional retelling of that true story -- a single-actor show that reimagines the events surrounding the day.

"The Amish Project" is being presented by Hummingbird Theater Co. through Sunday, November 10, at MuCCC on Atlantic Avenue -- a venue that, as Artistic Director Donald Bartalo pointed out, "has a play or something every single weekend of the year." M.J. Savastano is the sole cast member, playing seven different characters throughout a 90-minute run with no intermission.

The plot is non-linear, beginning with Velda, a young Amish girl, as she excitedly shares her current school lessons. From there, the audience meets her older sister, Anna, who is almost old enough for rumspringa (the period when Amish teens explore the outside world and decide if they want to join the Amish church or not). There's an overwhelming sense of hope that exudes from both characters -- only in Anna's case, it seems she is speaking from somewhere in the future. 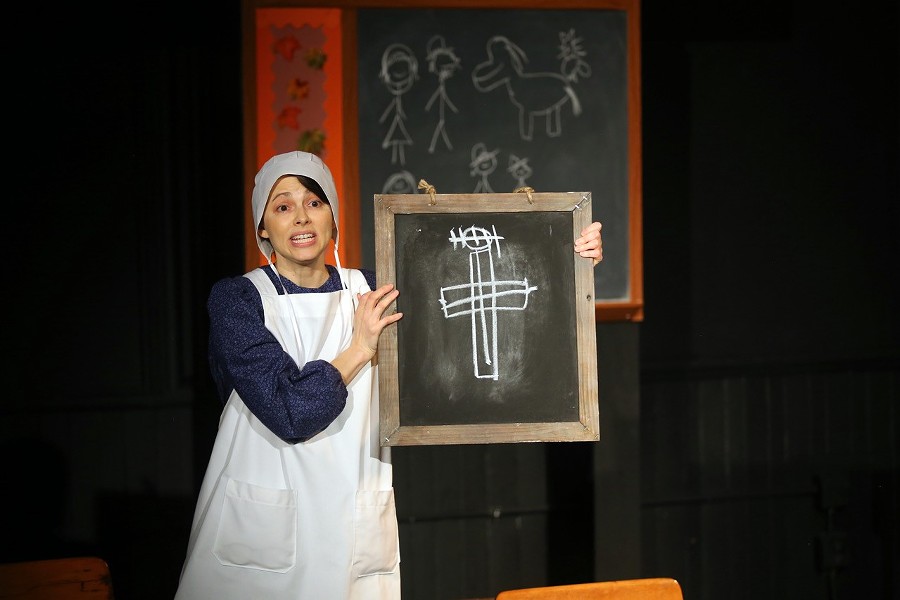 Savastano (they/them) is a renaissance force in local theater circles, and has experience with directing, writing, teaching, and acting. They're exquisite in this production, presenting razor-sharp characters with defined voices and physicality. But the most powerful part of their performance is the range of emotions they unleash as the play moves through difficult themes of forgiveness, hate, anger, sexual abuse, and death.

There are haunting details onstage: the clock is stopped at 10:25 a.m., and the calendar is set to October 2. Savastano uses the chalkboard as another "character" in the show, to great effect. In many ways, the play feels like a series of interviews -- characters often break the fourth wall and address the audience directly -- but in other ways, it feels like a recounting of history.

Savastano's portrayals of college professor Bill North and the shooter's widow, Carol Stuckey, are especially heartbreaking. There's also a distinct sense of humanization that doesn't often accompany such horrific tales, and with it an exploration of the grace and forgiveness the Amish extend in what seems an unforgivable crime -- as North says, "Something about them makes you wonder: what am I?"

Music and sound design by Justin Reilly and lighting design by Chris McCormick provide an underlying sense of place, as the characters and scenes change quite rapidly at times. A simple set design by Bartalo is the setting for a one-room schoolhouse, a fire department, a grocery store, and several homes. Throughout the show, Savastano wears a simple Amish dress, apron, and bonnet by Sandra Foley. Above the set hangs an impressive, authentic Amish quilt made by Rochester resident Peggy Braitsch, a member of Building Community through Quilting (BCQ).

Wednesday's performance was very well-attended, with an immediate standing ovation from the audience before the lights even came back up for Savastano's bows. Tears were still being wiped from cheeks as the applause continued. A post-show Q&A session is planned for each evening, and the audience is welcome to stay and discuss the difficult material in the show with the cast and crew -- a rare and wise opportunity for Hummingbird Theater Co. to offer. While "The Amish Project" joins a lineup of heavy-hitting shows playing around town right now, it is an experience that attendees will not soon forget, or regret.