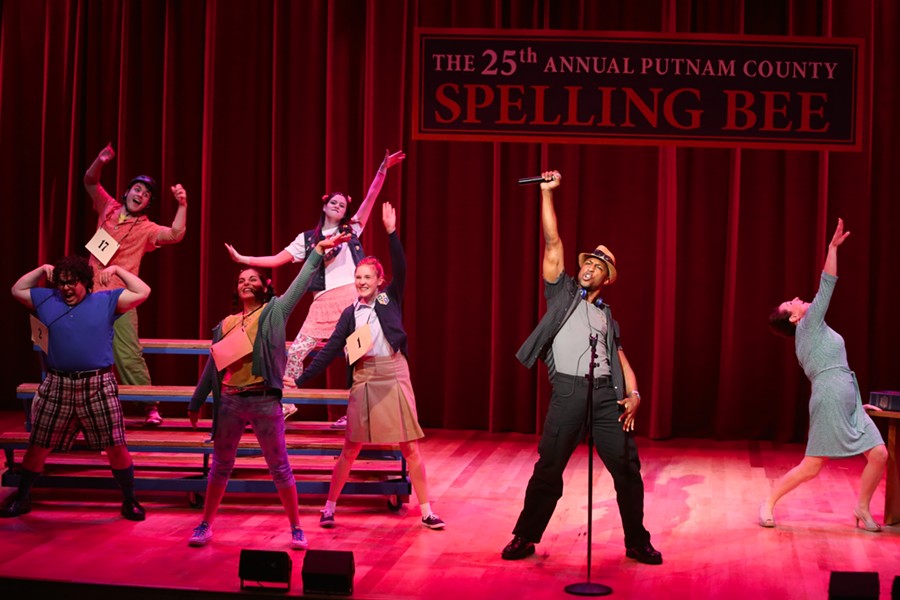 PHOTO BY COLIN HUTH A scene from one of the musical numbers of “The 25th Annual Putnam County Spelling Bee,” which is now playing at Geva Theatre.

There's an unofficial theatrical genre that's called "The Little Show That Could" -- a play or musical with modest requirements that started life in the hinterlands, finally made it to hit status in New York, and now has a lively afterlife in community theaters.

A recent example -- and a very appealing one -- "The 25th Annual Putnam County Spelling Bee" just opened at Geva's Mainstage and will run through Sunday, July 27. This musical, which started in 2004 as improvisatory theater in New York, was turned into a "real" musical and played in Massachusetts, Off-Broadway, and eventually on Broadway for more than a thousand performances. I'm not surprised at its success: Its physical demands are modest, and it is a good time for actors and audience, especially in a performance as good as Geva's presentation.

The show doesn't really have a plot, and doesn't need it. Rachel Sheinkin's book simply follows the eponymous spelling bee and its six finalists from beginning to end. These six verbally talented adolescents are as carefully divided into types as the soldiers in a World War II movie. What they have in common is their intelligence and their various health and family issues (or as we used to call them, "problems").  Much of the humor comes from the set-up of the spelling bee. Sheinkin rings many changes, from the sophisticated to the snarky, on the "use it in a sentence" line for each bizarre word. And at each performance, a few recruits from the audience are amusingly worked into the script.

But in addition to all the jokes, you get a sense of what has been lacking in the kids' upbringings. One has been continually called dumb by his family, another has a long list of health issues, one has helicopter parents, and another has parents who haven't bothered to show up -- Dad is working and Mom is finding herself in India. (Parents don't come off all that well in this show.)

Only one of the contestants gets to win, of course, and on the way to the finale each of them learns a Life Lesson or two. The show touches on questions of competitiveness and self-esteem, but mostly "The 25th Annual Putnam Country Spelling Bee" is what used to be called a Charm Show: funny, entertaining, not a groundbreaker but cleverly made, and a bit touching.

Adding greatly to the charm of "The 25th Annual Putnam County Spelling Bee" is William Finn's score. If you think the composer of "Falsettos" and "A New Brain" seems like an odd fit for a show about six middle-schoolers -- well, I thought so too, but I was wrong. The characters in those shows are lonely, confused, neurotic people, and his songs for them reflect that brilliantly. A typical Finn song, if there is one, will set a rapid pile-up of words to a jittery vamp, which occasionally relaxes and blossoms into a sweet, memorable melodic phrase. As it turns out, this is a very effective way to characterize these adolescent characters.

They sometimes sound a little too clever, but generally the songs ring true, and Finn is well aware that even smart, well-behaved spelling bee champs swear and think about sex. Without Finn's idiosyncratic music and lyrics, "Spelling Bee" would be an exercise in cuteness just this side of Disney; his score adds to the show a nice heaping of spice.

One attraction of this show is its simplicity. It uses contemporary costumes and needs no set to speak of, just a table, chairs, a microphone, and bleachers. And Geva's production looks pleasing -- particularly Amanda Doherty's costumes, which are nicely balanced in color, and nicely specific to each character. Melissa Rain Anderson's direction and choreography make the whole thing look easy as pie, and Don Kot's musical direction of a tricky score is perfection.

Geva hired six theater students from local or regional colleges to play the spelling bee contestants, and they are all pretty terrific, single and together: Josh Carey of SUNY Fredonia as a neo-hippie homeschooler; Tess DeFlyer (Nazareth College) as the girl whose parents never show up to the bee; Bella McGrath (Nazareth) as the coached and cossetted daughter of two dads; Rebecca Rand, a recent West Irondequoit High School graduate, as the overachiever who speaks six languages; Keland Alaka'I Sarno (Wagner College) as the previous bee's winner, in the throes of adolescent lust; and Paul E. Urriola as an allergy-beset young man whose spelling virtuosity is helped by his "magic foot" (which leads one of the show's wackiest musical numbers). These talented performers move like lightning and land every joke, and when Finn's music gives them the opportunity, they prove they have strong singing voices.

It's the kids' show, but there is also excellent support from the professionals playing the adult characters: Ryan Dietz as the vice principal and reader of the spelling words; Happy McPartlin as a former spelling bee winner and now "real estate queen of Putnam County"; and Javar La'Trail Parker as the bee's "comfort counselor." "The 25th Annual Putnam County Spelling Bee" may not be "My Fair Lady" or "Sweeney Todd," but it is definitely a "Little Show That Did," and an entertaining way to spend a summer night.