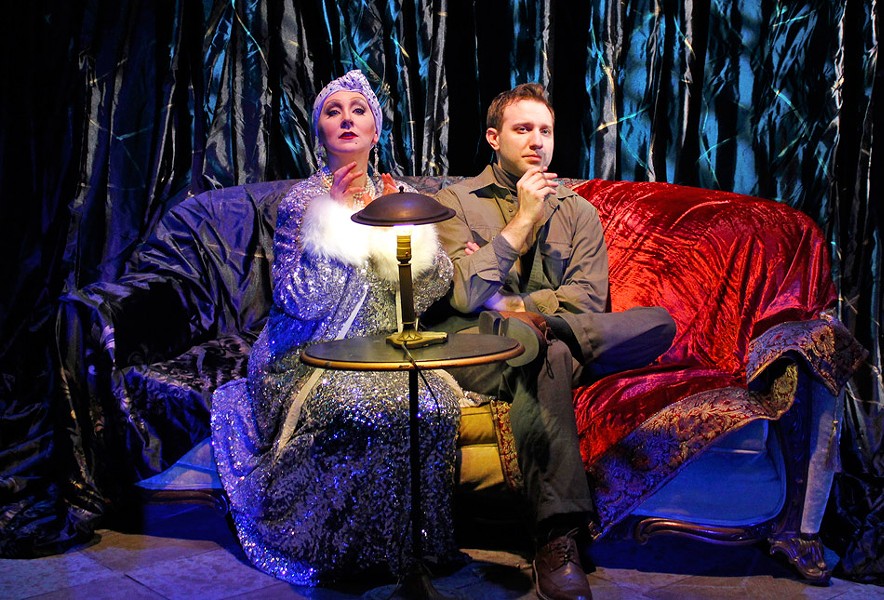 The dark side of Old Hollywood was apparently on the mind of Blackfriars Artistic Director John Haldoupis when he programmed the theater's 2013-14 season. It opened with "Me and Jezebel," which told an inspired-by-real-life story about latter-day Bette Davis. And now it closes with "Sunset Boulevard," Andrew Lloyd Webber's musical adaptation of the Billy Wilder cinematic classic about the destructive power Hollywood has on the dreamers it ensnares. "Sunset" is a big show with big numbers, and director Haldoupis and the cast and crew fill the Blackfriars space while bringing it all to life. If the pictures are getting smaller, the theater is bigger than ever.

"Sunset" tells the story of Joe Gillis, a struggling screenwriter trying to find work in 1949 Hollywood. After striking out with a baseball-flick pitch, Joe is approached by Betty, a studio script editor who wants to adapt one of his earlier stories; jaded Joe largely dismisses her interest. While on the run from repo men looking to take back his car, Joe ends up at a rambling mansion on Sunset Boulevard. He discovers that it is the home of faded silent-film star Norma Desmond, who hires Joe to edit the screenplay for her comeback project -- a retelling of the biblical story of Salome, in which she plans to star. But Joe has bigger problems than a delusional 50-something thinking she can portray a teenaged seductress on film. Norma becomes obsessed with Joe, and he becomes her kept boy even as he grows closer to Betty while working on their screenplay project.

"Sunset" is a natural fit for a musical adaption. It is Dramatic with a capital D; there's not a lot of subtlety to be found in this story. Instead it is loaded with great mid-20th century style, a larger-than-life main character, and a plot that in many ways feels like a modern-day opera. That operatic feeling is especially strong in the first act, in which several of the songs ("Let's Have Lunch," "Every Movie's a Circus") feature exposition and dialogue hammered into jaunty tunes, to varying degrees of success.

Although the show won Tony Awards for Best Musical and Best Score back when it debuted 20 years ago, its songs are frankly a very mixed bag. Some are fine but forgettable, such as "Greatest Star of All" and "Eternal Youth is Worth a Little Suffering." A few are just flat-out clunkers. But the musical also features three or four classic Lloyd Webber gems, including the title song and Norma's defining solos, "With One Look" and "As If We Never Said Goodbye."

Dawn M. Sargent plays Norma Desmond in the Blackfriars production, and she is ideally cast. She alternately swans or skulks about the stage, always displaying the over-the-top gestures that would be intrinsic to a silent-film star. And she really is ready for her close-up at all times: Sargent's Norma is giving you face for days. Sargent fully inhabits the role, and there was obviously a great deal of consideration giving to the way she approached virtually every aspect of the performance. Note that when Norma is singing to Joe, Sargent does so with a warbly 1920's affect. But when it comes time for Norma's big numbers, Sargent belts in full voice. And it must be said: Sargent is absolutely flawless in "As If We Never Said Goodbye."

Sargent has a good leading man in Jason Mincer as Joe Gillis. Mincer brings a great singing voice and natural charisma to the part. In his hands, the complicated relationship with Norma makes a certain kind of sense (live that kept-boy dream, Joe). And Mincer has absolutely no problem holding the audience's attention, even in the sometimes overly busy group numbers.

Speaking of those group numbers, Nicolette Hart is listed as being in charge of the musical staging, and she threw quite a bit at the eight-member ensemble. Possibly too much, as the ensemble members often get solo lines in the group numbers, and they were frequently difficult to hear over the show's orchestra. This was especially noticeable in "The Lady's Paying," in which the un-mic'ed singer in the lead -- who was gamely dancing all around the stage -- barely registered over the accompaniment.

That said, the show features strong singing from the supporting actors, including Robyn Fazio Lasser as Betty, Ken Harrington as Max, and Nicholas D. Rogers as Cecil B. DeMille.

Last week Haldoupis announced that the 2014-15 season will be his last as Blackfriars' artistic director. If you need an indication as to what kind of a loss that will be to Blackfriars specifically, and to the Rochester theater community in general, look no further than his direction and design for "Sunset Boulevard." Haldoupis is renowned for his lush sets and costuming, and his inventive approach to sets and staging. All of that is on display in this show.

The set for "Sunset" is comprised of a large archway with curtains and rolling sectionals that are constantly being reorganized by the cast into various formations. They create everything from a movie theater to back-lot offices, a moving car to a swimming pool. It's a very smart way to maximize the fairly limited space of the Blackfriars stage. The show also makes excellent use of lighting (designed by Nic Minetor) and projections (designed by Ron Heerkens, Jr.), which are critically important to the successful storytelling.

The costumes for the show are gorgeous, the look and feel of early films evoked by almost all of the characters dressed in black, white, and sepia tones - except for one specific exception. Norma is dressed in a seemingly endless number of flowing robes and gowns, all sparkling with sequins and spangles, and so many turbans. So many glorious turbans. The show makes a point about the high price of fame. But if fame leads to that kind of glamour, I'll start counting my pennies.