In front of chalkboards, benches and bunk beds, Romeo swoons: "Love goes toward love as schoolboys from their books. But love from love, toward school with heavy looks." The bell soon rings and the four school boys hide a tattered, banned copy of "Romeo and Juliet," embracing yet another day of austere Catholic prep school. In unison they march and chant, "Thou shalt not, thou shalt not."

Thus is the temperament of "Shakespeare's R&J," a boisterous production at Blackfriars Theatre. In daylight, these young men adhere to the regulations of their Catholic high school -- a society of sinlessness, gender complementarianism, and Latin conjugations. At night, however, they uncover a book that makes them clamor and tear at the pages -- "Romeo and Juliet" is their rebellious connection to a freer world.

When the students begin their bedroom production, they inhabit their characters like avatars. Their performance starts as a boy's room joke, but it unexpectedly turns into a vehicle for earnest expression and exploration. Who these young men are and who they are becoming is revealed as Romeo and Juliet dance, as the Nurse coddles, or as Mercutio proudly boasts. The layers are woven and elusive. Where does the student's play end and "Romeo and Juliet" begin? It's left to the audience to interpret what is real, what is acted, and what is plurality.

This award-winning script comes from Rochester native Joe Calarco, who was also the first to direct this play in New York City in 1997 with a production that ran for over a year. Since then, "Shakespeare's R&J" has been performed around the world, including Chicago, London, Egypt, and Tokyo, picking up nominations and awards along the way. Calarco --who earned a Lucille Lortel Award for the play -- is now the Director of New Works at Washington, D.C.'s Signature Theatre.

Accepting Calarco's challenge of a play-within-a-play is veteran director Fred Nuernberg. Nuernberg leads with exemplary focus: The production is sharp and superbly mapped, managing to avoid the common pitfalls that sometimes haunt ambitious narratives. "Shakespeare's R&J" is charming to watch because it feels so simple. The only real prop, besides beds and benches, is a red cloth that fits snugly into every scene and scenario -- appearing as blood, scarf, dagger, blanket, and vial. It is a signal of Calarco's great script, but also of Nuernberg's wonderfully executed minimalism. 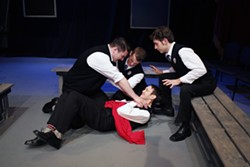 The cast is given wide room to work. Showing great range, the boys blossom with teenage hormones: howling with passion and fervor, reciting declarations of love with unrestrained eloquence, or hiding behind timidity. Occasionally, a line falls flat and the Shakespearean imagery drops. We are reminded who they are and where we are; somehow, it all works to the play's advantage. Shawn Gray is outstanding as Romeo/Student No. 1: His performance is both earnest and commanding, an expectation the Romeo character demands of him. Alex Pennise, a young up-and-comer, plays Juliet/Benvolio/Student No. 2. Dipping in and out of these characters, he transforms with ease, and his chemistry with Gray is undeniable. Even in collared shirts, vests, and ties, these two inhabit Romeo and Juliet without compromise.

Carl Del Buono has a tall order as Mercutio/Friar Laurence/Lady Capulet/Student No. 3, but his on-stage persona is absolutely riveting. Rusty Allen rounds out the production and adds a much needed balance as Nurse/Tybalt/Balthasar/Student No. 4. He is hilarious and heart-warming, and Allen and Del Buono, together, provide a rich texture that make this production so rewarding.

Perhaps most moving about "Shakespeare's R&J" is how the cast speaks so boldly through body language. Heartbreak and desire, friendship and envy, all through downcast glances, or soft breaths, or hopeful hugs. These understated notions play such large roles, though maybe at times too fleeting. When Romeo and Juliet kiss, Student No. 3 watches helplessly from under the bed. It is an incredibly telling reaction. And when Friar Laurence refuses to marry the ill-fated duo because of unexplored jealousy, Student No. 4 is stuck and frightened, caught between two worlds of uncertainty. In the midst of this multidimensional subversion of an ancient classic, we are indeed watching something tangible: a coming-of-age tale about self-discovery and the expression of truth -- for these boys, staved off at dagger's length.