"Dr. Seuss' How the Grinch Stole Christmas! The Musical"

Rochester Broadway Theatre League's current show is the holiday-themed, kid-oriented "Dr. Seuss' How the Grinch Stole Christmas! The Musical." (That is a mouthful.) Since I am not a kid, and I tend to like my holiday programming more subversive (think "Scrooged," "A John Waters Christmas," "Gremlins"), I am admittedly not the target audience for this show. So I brought my 7-year-old niece along to co-write this review. She loved it, and I think the best way to enjoy this live musical production of "Grinch" is to go with someone under the age of 10. Watching a kid get into the show -- and kids will get into the show -- is almost as entertaining as what's happening on the stage. 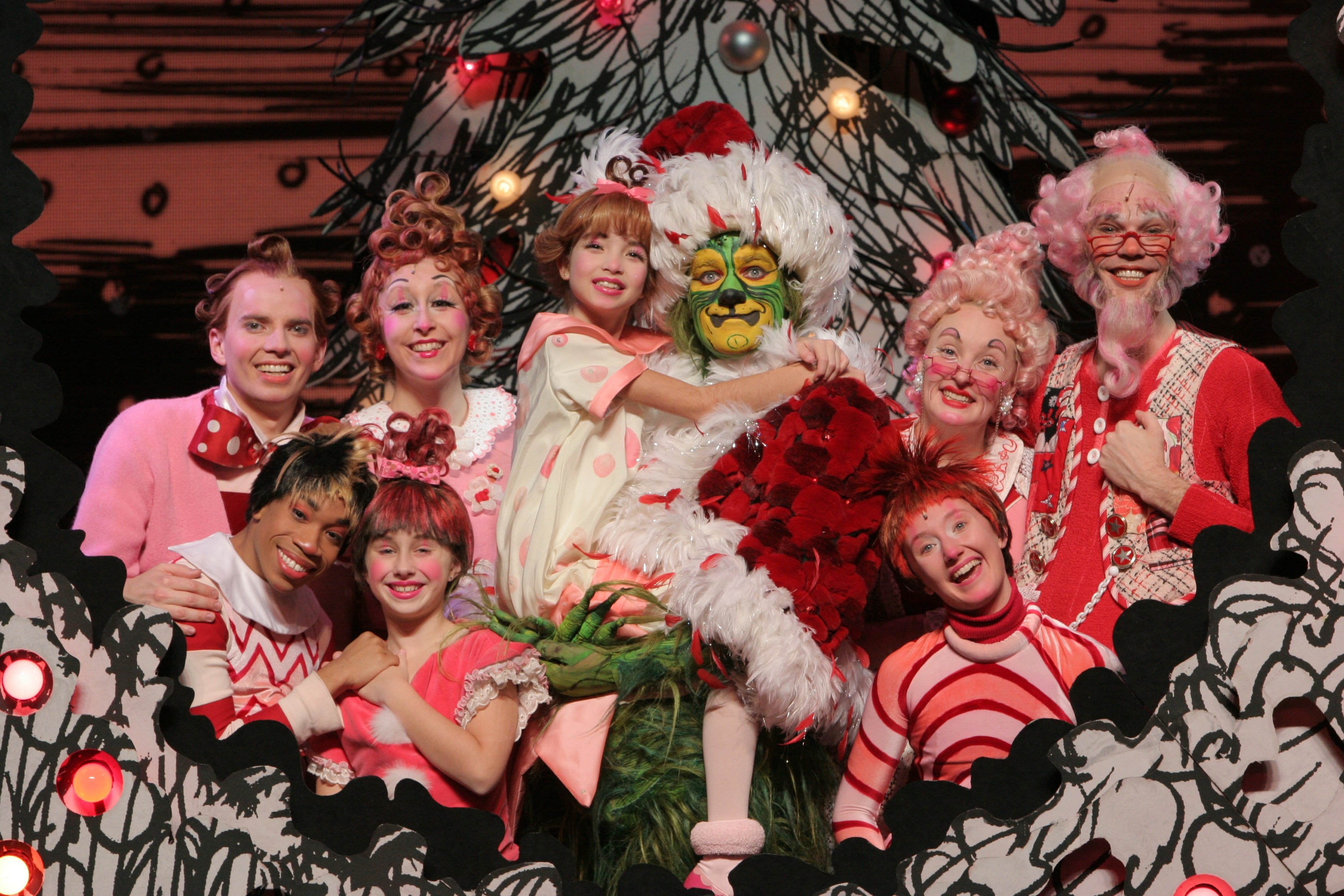 That's not to discredit the show itself, which features a host of talented performers, serviceable songs, and an interesting visual style. The musical extrapolates from the original 1957 book by Dr. Seuss, and weaves in elements from the 1966 animated TV special and -- according to my niece -- some references to the 2000 live-action version of the story starring Jim Carrey. (I never saw it.) The show is narrated by Old Max, the aged version of the Grinch's pet dog, who flashes back to his miserly master's dastardly attempt at hijacking the holiday to crush the spirit of the cheerful Whos in Whoville. You know the drill: a heart three sizes too small; stink, stank, stunk; an encounter with Cindy-Lou Who; everyone sings that vaguely creepy holiday song that sounds like a cult chant.

The production at the Auditorium Theatre features strong performers throwing themselves into some thoroughly silly situations. Stefan Karl is absolutely terrific as The Grinch. He's got a great voice -- multiple voices, really -- and manages to be totally likable even while his character is an out-and-out jerk. This Grinch breaks the fourth wall a bit, engaging the audience and dropping some contemporary pop-culture references for the adults, and fart and burp jokes for the kids. (My niece's note: The Grinch should wear pants, because she didn't like seeing his Grinch butt.)

Cindy-Lou Who, the tiny tot who shows the Grinch the error of his ways, is played alternately by Piper Birney and Jenna Iacono. I'm not sure which young actress performed at Tuesday's performance, but she did a beautiful job with the singing, dancing, and acting. Andreas Wyder is full of boundless energy as Young Max, while Bob Lauder as Old Max has a rich, sonorous that at first I mistook for a recording. He puts it to good use on the Thurl Ravenscroft classic, "You're a Mean One, Mr. Grinch."

Speaking of songs, the show is packed with them. It's rare for someone to not be singing for more than a few minutes -- which is precisely what you need to keep kids rapt with attention. The bad news is that, aside from the classic "Mean One," none of the tunes are particularly memorable. They're fine, they work (except for the adult Whos' "It's the Thought That Counts," which felt interminable and was either poorly delivered sarcasm or directly contradicted the actions of the characters singing it), but you're unlikely to be humming any of them on your way out of the theater. They also get repetitive, as the show features no fewer than eight reprises.

The set and costume designs bring to life the illustrations from the original picture book. The sets work surprisingly well considering that they're a collection of constantly rearranged two-dimensional elements. But collectively they make for full landscapes, and in a few instances -- such as The Grinch and Max descending upon Whoville in their sleigh -- some fun visual tricks are deployed. (There's also an environmental surprise that I will not ruin, but which completely captivated my niece, sending her into a giggling fit.) The costumes are both beautiful and slightly disturbing. Who-vian anatomy looks charming on the page, but borderline grotesque on real people, especially the adult male Whos' midsections. Everything is rendered in red, white, black, or pink, with the exception of the furry green Grinch. (My niece felt strongly that the production needed more brown. I have no idea what that means, but she kept saying it in the car.)

The show excels at drawing in young audiences. Although she wriggled through the exposition in the first 20 minutes, by about an hour in my niece was literally sitting on the edge of her seat, completely absorbed in the action. ("That was a really good movie," she said as we left, before I corrected her.) She did not find The Grinch at all scary (except for the pantslessness), and said that parents should take their kids to the show because it teaches important lessons. Specifically, that Christmas isn't about presents, that it's about having fun with your family. I followed that up by asking if it would be OK if she didn't get any presents this year. She said that I was being silly -- but that it would be alright if she only received one present. (Lies. Such lies.)

The start time for Tuesday's performance was pushed back by 20 minutes due to inclement weather. I totally understand wanting to get people in to the seats they paid for, but given that this is a kids' show being performed on a school night, that's a tricky proposition. I didn't get little miss back to Penfield until nearly 10 p.m. (the show runs 90 minutes without an intermission), and she was totally wired after the performance. Due to the relatively little sleep I have a feeling she herself might be a Grinch this morning...