“Disney’s Beauty and the Beast”

Disney's animated adaptation of the French fairy tale "Beauty and the Beast" hit movie theaters in 1991. It is an important Disney property for several reasons. It was the first animated film to ever score a Best Picture nomination at the Academy Awards, and it was also the first Disney animated feature to be turned into a Broadway musical. So without "Beauty and the Beast," we might never have had the universally beloved "Lion King."

The live musical version of "Beauty and the Beast" is no "Lion King." It is a very straightforward, very faithful retelling of the film. There's not a lot of artistic interpretation, just an attempt to put what was on the screen on the stage. Mind you, that includes turning human actors into believable anthropomorphic candlesticks, so the show certainly has its creative merits. 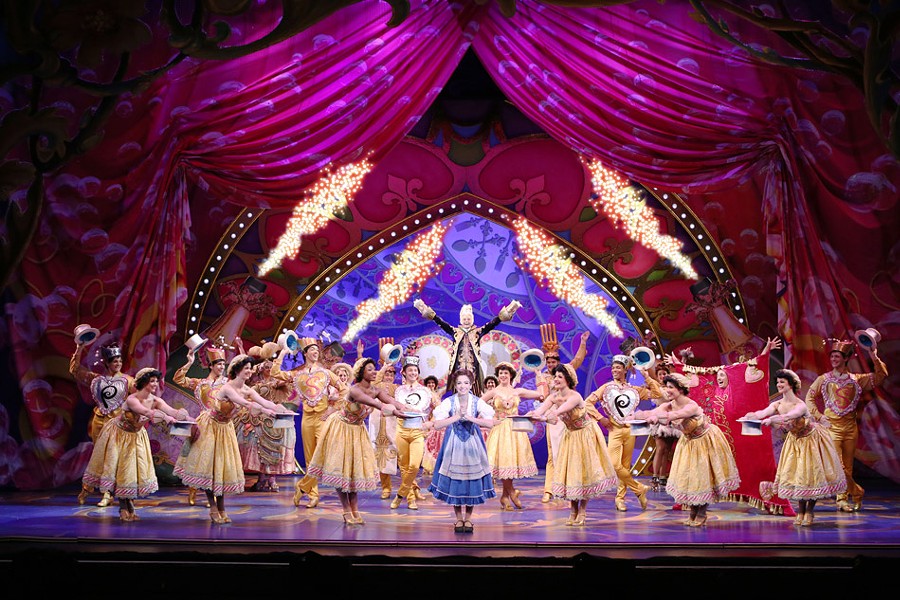 You can argue that the show is corny, or cheesy, or sappy -- or other food-related adjectives -- and that's not wrong. But it is intended to be a crowd-pleasing, family-friendly show that uses big-budget Broadway stage magic to bring to life a classic story. The touring production currently on stage at the Auditorium Theatre does that quite successfully.

Unless you live in an enchanted castle with talking wardrobes as your only company, you likely know the story. In an attempt to save her father's life, bookish small-town girl Belle ends up a prisoner of a monstrous beast. He is secretly a prince, cursed by a sorceress until he can learn important life lessons about how to love and not be an entitled jerk. After a rocky start the two grow closer thanks to the intervention of some singing and dancing dishes (just go with it), but their potential happy ending is imperiled by Gaston, the chauvinistic village brute who wants Belle to be his personal baby factory.

It's important to remember that "Beauty and the Beast" is very much a family show. And by "family" I mean it tries to please every possible audience member. If you're familiar with modern children's programming, you'll know that the characters spend a great deal of time yelling at each -- seriously, everyone is screaming, all the time -- and there's a fair amount of that manic, high-energy scrambling here. But there's also the very sweet love story for the romantics in the crowd. You've got big song-and-dance numbers and special effects for those seeking spectacle. And there's some flirty French maids and monsieurs and a bona fide can-can for the lascivious.

For the most part, "Beauty and the Beast" is a good-looking show. The costumes are largely impressive, there are some nice special effects (including some David Copperfield realness toward the end), and the layered backdrops make for a rococo frame to the action. The dancing is quite good, especially the great stein-clinking sequence in "Gaston." All of the visuals come together in the eye-popping, smile-inducing "Be Our Guest" number, which is basically a miniature, G-rated Katy Perry concert. (Seriously, Perry's entire candy-colored, overly literal aesthetic is almost eerily like the presentation in that sequence. That's not a criticism -- it's all a ton of fun.)

The sound was a problem on opening night, as the mics for the entire cast needed to be turned up. The orchestra frequently overplayed the singers, and in the section where Lumiere and Cogsgrove led the audience on a tour of Exposition Land, they were virtually impossible to hear.

In terms of the cast, I was fascinated by Hilary Maiberger as Belle. At first I found her Belle to be a cold fish. She did everything asked of her by the script, but seemed distant, or lacking a spark. But as soon as she was made a prisoner in the beast's castle, she blossomed into the spunky, bright, hopeful character from the film. I'm not sure if she needed to warm up -- the cast in general seemed to be on autopilot for the first few numbers -- or if that was a deliberate acting choice. Regardless, she ultimately turned in a lovely, likable performance.

DarickPead plays Beast in this production. Pead is a good singer, but I didn't find him believable in the moments when he was supposed to be menacing. Once he tries to win Belle's affections he frequently descends into mugging. That's likely an attempt to appeal to the kids in the audience, and it surely worked -- the crowd was eating him up on opening night.

The supporting actors are universally good. Kristin Stewart does a very good approximation of Angela Lansbury as Mrs. Potts, James May gets some laughs out of Cogsworth's surprisingly droll humor, and Hassan Nazari-Robati makes for an appealingly horndog, yet somehow still classy, Lumiere. And finally, Tim Rogan does a great job as the textbook definition of bad boyfriend material, Gaston. He is all cartoonish cockiness and barely repressed rage, with a great singing voice to boot. However, I do have a small objection: in his eponymous song, Gaston brags about every inch of him being covered in hair, whereas Rogan flashes a completely smooth patch of chest -- the 13-year-old version of this author, who had an, um, intense attachment to cartoon Gaston, was deeply disappointed.