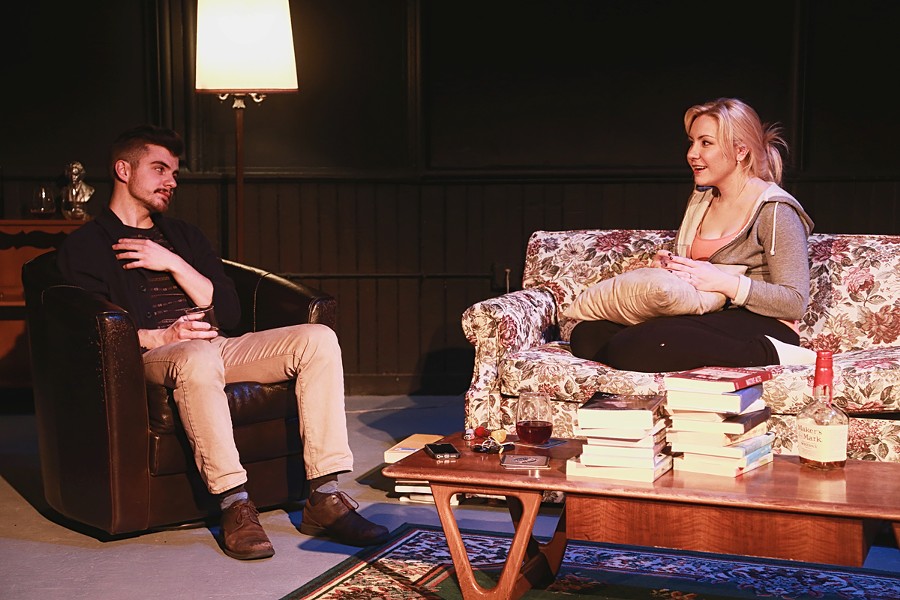 PHOTO BY ANNETTE DRAGON Luke Martin as Drew and Emily Putnam as Margaret in Kate Royal's new play, "Mammoth." The production is on stage at MuCCC through Saturday, March 7.

With "Mammoth," a new play at the Multi-use Cultural Community Center, writer-director Kate Royal provides further evidence that western New York has an emerging ecosystem for young, intrepid playwrights. The 2013 SUNY Geneseo graduate has already gained some recognition for her play, "The Nameless Days of Gumdrop Smith," which debuted at the 2014 Rochester Fringe Festival. Currently, she is an Artist-in-Residence at MuCCC, where she has further honed her skills with dramaturg Claudia Nolan.

Margaret (Emily Putnam), the mother of a young child, works in a publishing office in England. Her visit home is built upon the pretense of retrieving the scattered pages of her late father's unpublished novel, though she also brings "news" of an engagement. Drew (Luke Martin) is a struggling artist in his late-20's. Since Margaret's departure, he held the burden of raising and providing for Jeffrey (Marc Cataldi), the baby of the family who is soon shipping off to Cornell. As the youngest often does, Jeffrey buffers the bitter arguments between his elder, angry siblings.

While waiting for the arrival of their expatriate sister, the brothers pack and clean the living room in preparation for a yard sale. Boxes and bare bookshelves stand behind them. Wine and whiskey overlook from the nightstand. Over the stage an awkwardness hovers. "It will be weird to have her back," Jeffery says. "I'm not sure if I'm ready," Drew responds, neurotically shuffling stacks of papers, wiping down shelves, and adding coasters under drinks. It's clear that Drew harbors the most anxiety over Margaret's presence, to an extent covered as the narrative unfolds. When chatting with his brother about Margaret's engagement, Jeffrey feels uneasy, too, saying, "Yeah, we found out through Facebook."

Margaret arrives, and the emotional fragility becomes palpable. "Welcome back," they tell her.

It's here that the focus of the play becomes obvious. "Mammoth" is not the timeless family drama, relating to all generations and cycles of life -- like Tracy Letts's "August: Osage County" -- that mainstream theatre audiences have become used to. Rather, this is a contemporary play with laser focus: we see Millennials hovering over their phones, watching TV, or arguing and becoming defensive about Facebook. They are attempting to make sense of today's hyperconnected society and the superficial relationships it breeds.

A pleasant touch, Royal incorporates songs from the rock band, The National, who are emotionally understated in its own right, to serenade the scene changes. The results, like her dialogue, are effective: establishing atmosphere, adding further to the "Millennial texture" of the play.

While the first half of "Mammoth" is balanced and intricately crafted, the play loses some of its hard-earned goodwill after intermission when defensive tantrums and emotional outbursts become a crutch to develop plot. Admittedly, Royal's cast shows terrific range through these repetitive screaming matches, but the story as a whole comes to suffer. Purposeful dialogue blends into white noise and white noise can breed an impatient audience.

Still, "Mammoth" leaves behind a huge impression of an exciting new voice in theater. Royal writes characters that feel fresh and original, with stories that need to be told.