"Last Gas," which opened last week at Geva, is a play about lost chances and last chances, bad choices and no choices. Geva is calling it a "romantic comedy," which is not really true, even though it is very funny and there's definitely romance in it. If this a romantic comedy, then so is Chekhov. Although instead of wanting to go to Moscow, the characters in "Last Gas" want to go to a Red Sox game, and generally end up going nowhere at all. 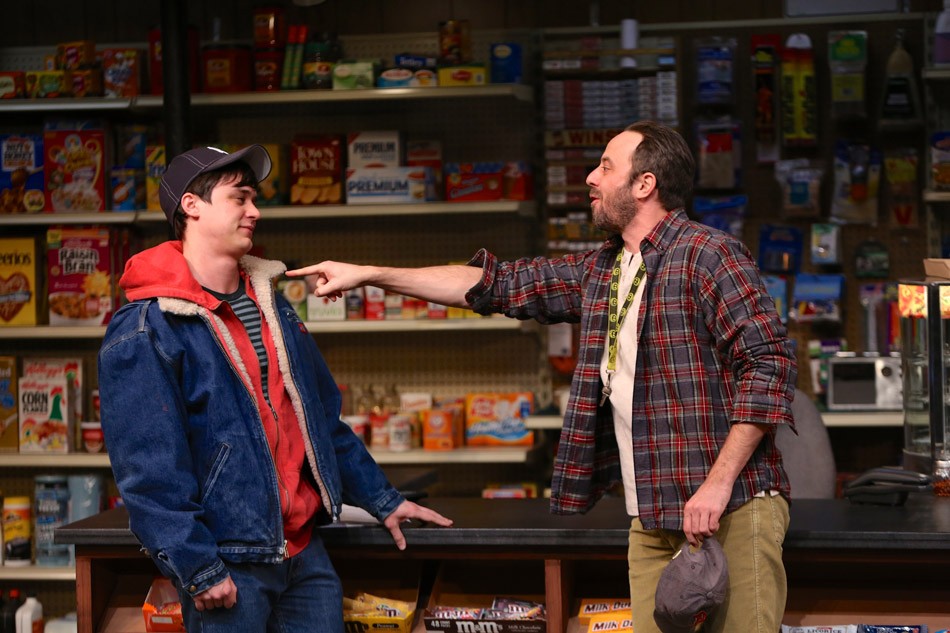 The play is the work of John Cariani, whose "Almost, Maine" was produced at Geva several years ago and has been produced practically everywhere else since. Cariani's specialty is describing life in the area he grew up in, and an area I'd guess few playwrights have explored -- Aroostook County, in the northernmost part of Maine. A hundred miles past the end of the interstate, surrounded by Canada, it's a place that is cold all the time and where people live on farms or in townships that don't even have names. It's an area where the natives are suspicious of folks "from away" and, as one character puts it, the potatoes and broccoli travel further than the people. It has its beauties, but it's still a place most people want to leave.

In the first scene we meet several people who haven't left Township 15, Range 8, including Nat Paradis (David Mason), who runs Paradis' Last Convenient Store; in his 30s, he is unmarried, still lives above the store with his father (John Pribyl), and is a very unhappy man. Nat is prodded to get out and start dating again by his father -- a randy old rip who likes them "young and Canadian" -- and has vexed relationships with his 16-year-old son (Nick Erkelens); the boy's mother, whom Nat never married (GabraZackman); and his best friend, Guy (Aaron Munoz). Guy has just bought Nat a ticket to a Red Sox-Yankees game in Boston as a birthday gift, a generous gesture that sets off the action in the play.

Nat also has to deal with LureneLegassey (Brenda Withers), a township native who moved to New York City and has returned briefly for her mother's funeral and burial. "Lu" has hopes of rekindling a high-school romance with Nat and he responds enthusiastically at first, but things don't work out as either character hoped.

That's about all I can tell you about "Last Gas." It gradually develops that Nat's life has been paralyzed by a secret, and Geva has asked reviewers not to give it away. I will respect that. I'll just say that Nat's secret is indeed the kind that could cause all hell to break loose in an unhappy family, as indeed happens in Act 2. After the secret is revealed, Nat finally makes a move to escape his emotional prison and start a new life. The ending leaves his success somewhat in doubt, but being an optimist, I choose to believe that Nat makes it out. I think Cariani does, too.

Cariani is an actor (he was nominated for a Tony for the recent Broadway revival of "Fiddler on the Roof") and he treats actors well in "Last Gas." All the parts are juicy and the characters differentiated nicely in the dialogue. Cariani is able to write sarcastic but plain-spoken patter that still sounds like real people talking, and not like "Down East" caricature. And he does give his play a very specific sense of place, detailed and a bit claustrophobic -- a place where there isn't much to do and all the time in the world not to do it in.

"Last Gas" doesn't strike me as a first-rate play -- maybe it is a bit too long and the pace a bit too leisurely, or maybe the sudden revelations and confrontations near the end are a bit too sudden. But it is a warm and genuinely moving evening, has a character of its own, and it is very well presented at Geva. The entire cast is expertly molded into a real ensemble by director Skip Greer. As Nat, a little boy lost with a scruffy beard, David Mason makes inarticulateness and hesitation both funny and heartrending. One look at the pain in this character's eyes is enough to tell you this is not going to be a typical "romantic comedy."

The set, by Robert Koharchik, deserves a paragraph to itself. It's a two-story structure that completely fills the Geva stage. The first level is a remarkably detailed rendering of every little rural convenience store you've ever been in, the kind that has the antifreeze next to the Cheerios; the second floor shows the Paradis' apartment, which seems stuck in the late 70's, like its inhabitants. Huge as the whole thing is, it doesn't overwhelm the play, but complements it.