The sun was setting in streaks of fiery gold and pink as crowds trickled through the gates of Hill Cumorah on a breezy Saturday night. At 8:40 p.m., most of the pageant's spectators were already seated in one of the 8,000 provided plastic chairs, munching popcorn and other treats from nearby food vendors. Large striped tents, which house cast, crew, and production assets, dotted the wide acreage of the valley. On first glance, it could simply be a summer festival. But the 82-year-old, free, annual event is more than meets the eye.

And in 2020, after 83 years of free public shows, one of the nation's longest-running outdoor theatrical productions will have its final curtain call.

As families made their way to the hill with picnic baskets and blankets, a man with a large sign yelled, "If you want to believe a lie, you have the freedom to do that, but God's gonna judge you!" From the other side of a fence, he raised his megaphone and targeted a man his own age. "Keep smirking, sir, you won't be happy in hell!" Across the road, a teenage boy wearing a baby blue t-shirt emblazoned with "Y'all Need Jesus" handed out anti-LDS pamphlets. A woman laughed as she accepted one and said, "We have him. We're here to see the story about it." 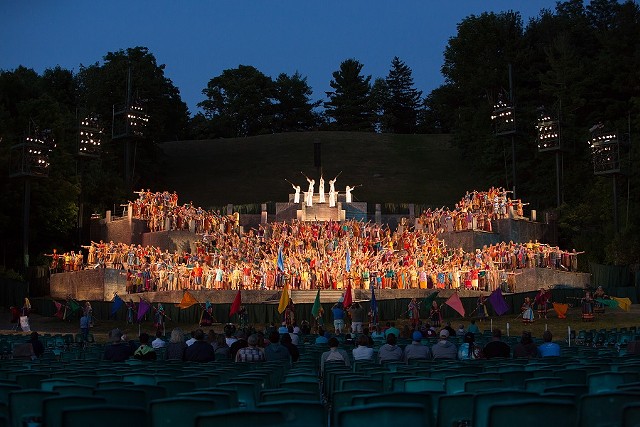 The Hill Cumorah Pageant isn't just an annual theatrical experience. It's a religious destination in Palmyra, NY, sacred to the Church of Jesus Christ of Latter-day Saints as the site where Mormonism founder Joseph Smith discovered the buried golden plates he would translate into the Book of Mormon. The LDS church moved its headquarters to Salt Lake City, Utah, a couple of decades after Smith's 1823 discovery. But today, nearly 200 years later, the church has followers all over the world.

Palmyra's event is the flagship pageant of the LDS. It's a 75-minute production with a pre-recorded score by Crawford Gates featuring the Mormon Tabernacle Choir and Utah Symphony, and in 1988 the pageant received an updated script penned by Orson Scott Card. The narrative includes 10 scenes from both The Book of Mormon and the Bible, chronicling the story of a group called the Nephites (the ancient prophets in the Mormon faith) from thousands of years ago in Jerusalem to the discovery of the plates on Hill Cumorah.

The Pageant began in 1937 as a production lit by car headlights; now it has a seven-tier steel stage built into the side of the hill, state-of-the-art special effects that simulate lightning and fire, 12 theatrical lighting and sound towers rising 50 feet into the air, and a completely volunteer cast of 770 people playing more than 1,200 roles. The stage is stored throughout the year and trucked in, and takes a month to rebuild before the pageant starts. Each night, the cast dons elaborate costumes, from layered robes and headpieces to angelic gowns and pioneer-era garb. Audience members can see these creations up close, as the cast mingles with the audience prior to each show. 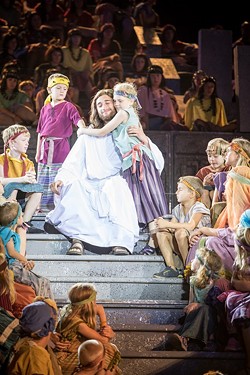 The production quality is impressive; similar to an outdoor show at Walt Disney World or Universal Studios. And for fans of Charlton Heston movies, the spectacle feels like "The Ten Commandments" meets Broadway. Aside from the cast, there is a volunteer staff of more than 150 that includes professional theatrical designers and directors, fight choreographers, and a full media team. This year, the pageant also features its first female artistic director, Shawnda Moss. Hill Cumorah volunteers have to apply to participate, and while the event normally uses a pool of equally returning and new volunteers, this year mostly new volunteers were chosen from the 4,200 applicants, since the pageant will end soon.

In October 2018, the LDS Church announced in an official media statement that it would end four of its seven unique, worldwide pageants (two ended this year, two will end in 2020), stating that "the Church of Jesus Christ of Latter-day Saints is growing across the earth ... Local celebrations of culture and history may be appropriate. Larger productions, such as pageants, are discouraged." The towns where pageants are ending will feel an economic impact, as the productions bring visitors from all over the world and, in the case of Palmyra, it is the largest annual community fundraiser for local groups like the Kiwanis and Rotary. And when they're not rehearsing or performing, the cast spends part of their 17-day volunteer commitment in the community, completing more than 1,800 hours of service projects.

Pageant attendance has already been record-breaking this year, even with torrential rain on opening night, but the 2020 pageant is anticipated to be the biggest yet. After that, Hill Cumorah will continue to operate its Visitors Center and function as a pilgrimage site for LDS church members, but it will return to a more natural state, and the echoes of pageantry will only be stories for future generations. 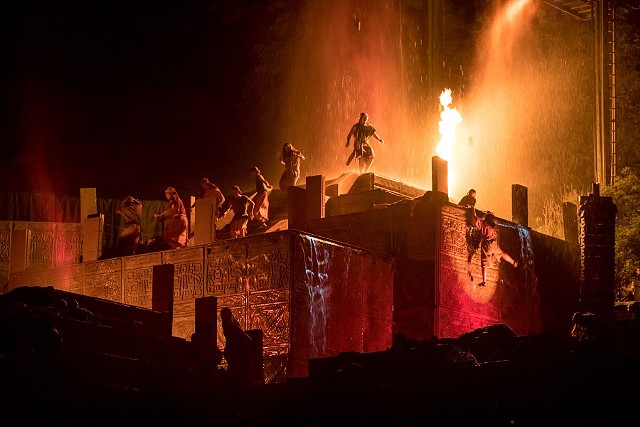