by David Raymond and Chris Thompson 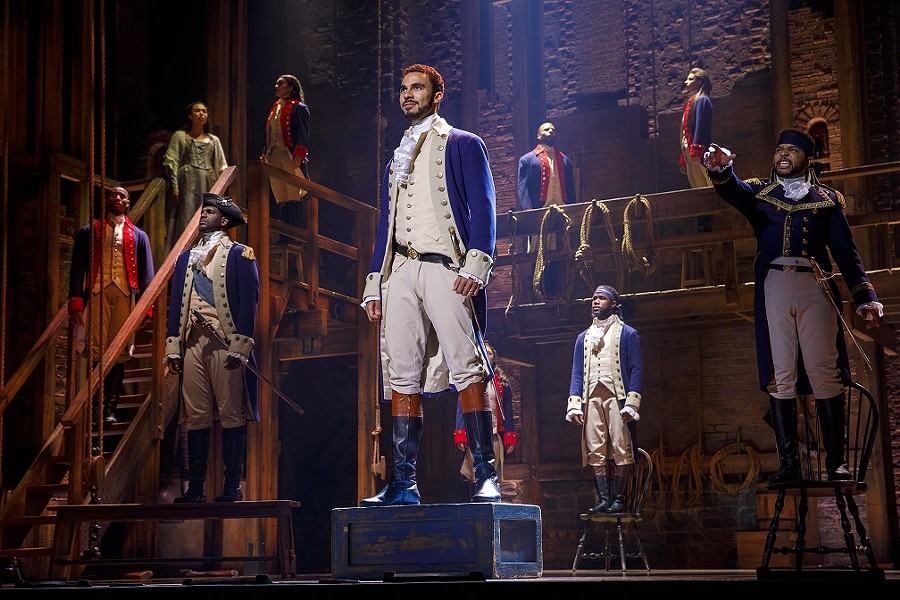 PHOTO COURTESY JOAN MARCUS The company of "Hamilton," presented by RBTL through May 12.

I keep saying that I don't like musicals. I also am not a fan of attempts to make history "hip." My most dreaded time in English class was when the teacher said, "Oh so you like hip-hop? Well let me tell you about the oldest rapper around: WILLIAM SHAKESPEARE." My mind is not blown, Mr. Jenkins. Ms. Gold already pulled the same stunt last year, and "King Lear" was still a slog.

Still, I went into "Hamilton" with an open mind. Yes, it is both a musical and a "hip" retelling of American history. But it has also won multiple awards (including 11 Tony Awards, a Grammy, and the 2016 Pulitzer Prize for Drama), has had critics and audience members raving about it since it first opened, and tickets have been so hard to attain that once you have one, you feel compelled to sing "I've Got a Golden Ticket" as soon as it touches your hand. This much hype would not last if "Hamilton" was just a half-hearted "Schoolhouse Rock" on stage. Its creator, Lin Manuel-Miranda, is much too talented to deliver something like that.

I expected to simply follow along with each song from the cast recording as they were belted out. But from Aaron Burr's first few lines, I was all in.

The crowd erupted when Alexander Hamilton (Edred Utomi) appeared. And throughout the performance, the first appearances each of George Washington (Paul Oakley Stovall), Eliza Schuyler/Hamilton (Hannah Cruz), and Marquis de Lafayette (Bryson Druce) garnered applause. But the ensemble cast, acting out all the lyrics, are the unsung heroes of the show. They seamlessly executed multiple costume changes in nearly every number. I have only seen Grace Jones pull off such a feat live.

This is not a musical, this is a rock concert. Sporadic applause and cheers burst from the audience each time the cast started a few bars of the next song. I half expected someone in the audience to start yelling requests. After the first number I expected things to calm down, perhaps a little bit of dialogue in between numbers, but the cast dived right into another song with the first encounter between Aaron Burr (Josh Tower) and Hamilton. Throughout the entire show, perhaps five words are spoken; everything else is in verse. This isn't a rock concert, it is an opera.

Given the name of the show, it is reasonable to think that this would be a patriotic sanctification of Alexander Hamilton. It definitely is not. He is just the vehicle to tell an American Revolution story. Deification is not the goal either. The musical covers Hamilton's feuds with Madison (Chaundre Hall-Broomfield) and Thomas Jefferson (also Bryson Bruce). And it covers his infidelity and ensuing blackmail in more detail than I expected.

Not only is Hamilton shown as a deeply flawed human, a song about his affair transitions to a solo that focused on Eliza Hamilton and how she dealt with the revelation. The death of Alexander's son, Philip Hamilton (Jon Viktor Corpuz), is given attention with a heart-wrenching song that also partially centers on Eliza's loss as a mother. The grief was palpable. Even Hamilton's own death at the hands of Burr is a moment for reflection on his life, through all the people he affected and was influenced by, as the bullet slowly travels via the ensemble cast to his chest. At the end, I could not even completely vilify Aaron Burr.

The "Hamilton" soundtrack is the most New York thing I’ve heard in a while. The bars in the introductory song “Alexander Hamilton” reminded me of an old school 1980s cadence from the Bronx or Queens. As that song moved into the next, “Aaron Burr, Sir,” Burr and Hamilton shift from a smoother R&B flow to give way to the grittier “freestyles” of the three revolutionaries: John Laurens, Hercules Mulligan, and the Marquis de Lafayette.

Hercules’ bars in particular stood out because it sounded like what would happen if 1990s Busta Rhymes’s gruff vernacular and 2000s-era Pharoahe Monch’s enunciation had an auditory baby. The trio’s parts remind me of the scrappiness of a young Native Tongues crew’s freestyle sessions.

The numbers that were primarily sung, like “The Schuyler Sisters,” had the bounciness of 1990s R&B dance anthems that were as much a part of hip-hop as full rap songs. There was even a break beat and rap intro for “Schuyler Sisters” that had me wondering if Reverend Run was going to appear to officiate Alexander and Eliza’s onstage wedding.

“Ten Duel Commandments” is the most obvious hip-hop callback -- to the late Christopher Wallace’s “Ten Crack Commandments” -- which makes sense, since both duels and drug solicitation can end in at least one person dying. After the ensemble song “Reynolds Pamphlet,” Eliza’s solo “Burn” was a powerful rebuke and declaration of her strength that alluded to a more subdued “Lemonade.”

But my favorite numbers were the “Cabinet Battles.” The public feud between Thomas Jefferson and Alexander Hamilton portrayed as rap battles is a perfect way to show how contentious they were. Though the cabinet battles had to do with policy, the venom they spit while discussing the economy and neutrality in the French Revolution made them more poignant. Also, I am not sure whether or not the composers deliberately went heavy with a “tick-tick bump” for “Cabinet Battle #1” because Jefferson is from the South (and the debate was the foundation of the tensions between Southern landowners’ state-centered rights and Northern economists federalist views), but it made me think the beat was a drumbeat, foreshadowing of the Civil War (should Lin Manuel Miranda decide to write a musical about that).

Among the highlights of the show: Lafayette and Hamilton discussing their successes in battle, quipping, "Immigrants get shit done," and the audience cheered. I welled up when soldier and statesman John Laurens and Philip Hamilton died, both by a bullet (and both played by Jon Viktor Corpuz. Every appearance of King George (Peter Matthew Smith) was shade in song form, and it was perfect. The ensemble cast manages to be simultaneously all over the stage and invisible, and the demographics are appreciated. I have not seen so many curls and afros on a stage for a major performance. Most of all, the show depicts a nation that was rife with political turmoil, lots of in-fighting, and hot tempers all around. Basically, not much has changed. We just have fewer duels.


History may not have changed much since the 18th century, but musicals sure have, and one of the most exciting things about "Hamilton" is how it fits into the history of American musicals while drawing it forward. Lin-Manuel Miranda knows rap and hip-hop history, but he's also a Broadway baby, and it is remarkable how skillfully he combines the two in this show, which seems to exist simultaneously in Colonial America and right now. To give just one example: faced with presenting two dry political debates between Thomas Jefferson and Hamilton, Miranda turns them into epic rap battles, a witty way to give early American ideas a 21st-century treatment.

Many of the finest Broadway musicals seem to have started with improbable ideas: Race relations in the South Pacific during World War II, gang warfare in 1950s New York City, and the writing of the Declaration of Independence. "Hamilton," which is actually based on an exhaustive biography of the Founding Father by Ron Chernow, is the latest in the "Is-this-really-a-musical?" series, and every bit as memorable as the shows referenced above. They all receive shout-outs in the lyrics of "Hamilton," a tribute to Miranda's love and knowledge of Broadway lore.

I've heard "Hamilton" described as a "hip-hopera" — a cheesy descriptor for a musical work of remarkable variety. The torrents of words in rap turn out to be an ideal way to treat this story. Miranda uses rap the way Mozart used recitative (in which a singer adopts normal patterns of speech), to push out exposition and power the plot. (This is one show where you must pay attention every moment, or risk missing a plot point or a bit of witty wordplay.)

But if there are a lot of words, there is also an abundance of music in a myriad of styles. This reflects the multicultural approach to telling Alexander Hamilton's story, and anticipates American musical history yet to come: not just rap but also blues, jazz (Thomas Jefferson's entrance in the second act is Duke Ellington-meets-Cab Calloway), R&B girl-group numbers for the Schuyler sisters, and good old top rank Broadway. "The Room Where It Happens" is not only like a Kander and Ebb-Bob Fosse number on steroids (and one of the most exciting numbers in the show), it also covers a huge amount of plot and character development.

Is it an opera? The term might be a kiss of death for pop or Broadway fans, but Miranda is an ambitious composer, and I think that his ambitions have led him there. "Hamilton" is sung or declaimed throughout, which is really all that an opera needs. The music may be wildly varied, but it is put together seamlessly, and the big ensemble scenes dovetail remarkably with more intimate moments, while building to some powerful climaxes. (Not to mention that many of the "Hamilton" singers seem to have the voices to handle "real" opera.)

Miranda also uses a few recurring themes and phrases with great dramatic skill. As American vernacular musical theater, a combination of high ideals and dazzling Broadway showmanship, "Hamilton" is already a classic on the lofty heights occupied by "Porgy and Bess," "West Side Story," and "Sweeney Todd."