The story behind John Pielmeier's play "Agnes of God" will be familiar to most Rochesterians who lived here in the 1970's and early 80's. According to the playwright's introduction included in the program to Greater Rochester Repertory Companies' current production of the show, Pielmeier -- interested in writing a play through which he could explore his conflicting thoughts on his own Catholicism -- found inspiration in a newspaper headline: "Nun Kills Baby." He admits to doing no research beyond that title, but the story in question referred to the trial of Sister Maureen Murphy. In 1977, Murphy, an apprentice nun who attended Nazareth Academy in Brighton and taught at a Montessori school in Pittsford, was tried and acquitted of manslaughter in the death of her infant son. Her pregnancy had been kept a secret, and the child's father never revealed. The salacious case made national news, and is still remembered by many area natives today.

On opening night, Don Bartalo, the director of the GRRC production of "Agnes," stressed that the play is not the story of Sister Maureen. That was merely a jumping off point for the playwright to tackle various social and religious issues. And as the play goes along, its fictional aspects become more and more apparent -- possibly to its detriment. But beyond its origins, beyond its local significance, it is worth watching for the questions it raises, and especially for putting a spotlight on three talented local actors. 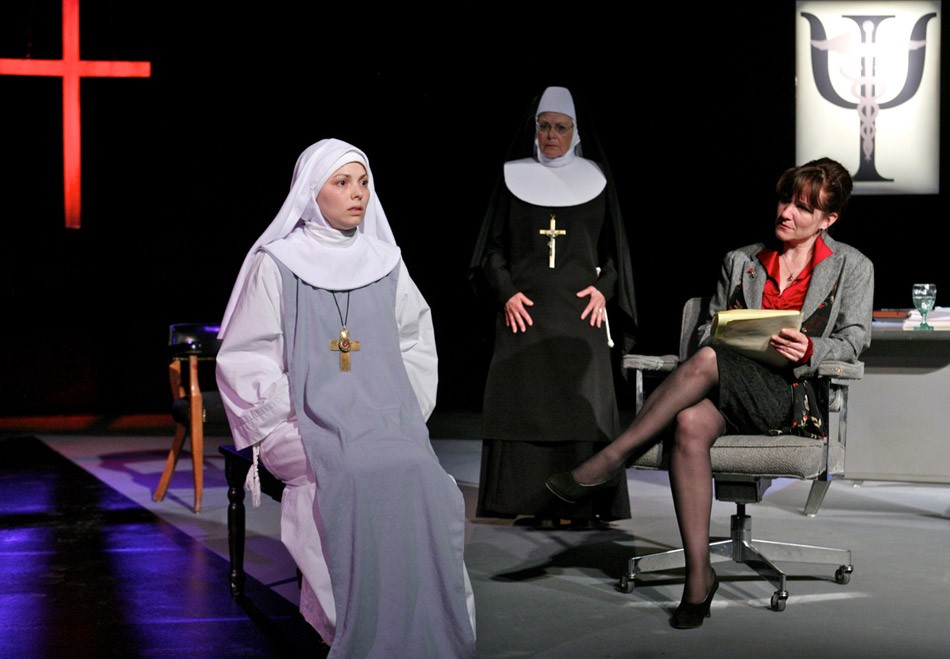 "Agnes of God" features only three characters, all women. Dr. Martha Livingstone (Erin-Kate Howard) is appointed by the court to determine the mental stability of Sister Agnes (Marcy J. Savastano), a young nun accused of killing the newborn child with which she had been secretly pregnant. Agnes denies the very existence of the child, claiming that the police made the whole story up. She also claims that she sees and speaks to spirits, both good and evil, and has experienced inexplicable physical phenomena. Throughout her appointments with Dr. Livingstone, Agnes is fiercely protected by Mother Miriam Ruth (Denise Bartalo), who views Agnes as a rare innocent, and her connection to God something akin to a miracle. As the play goes on, Livingstone reveals some personal issues that make her intensely distrustful of the Catholic faith. Meanwhile Mother Ruth subverts the doctor's expectations even while demanding that she consider the possibility of nonscientific explanations.

The gulf between religion and science is telegraphed bluntly by the minimalist set, featuring a large cross on the left, a caduceus on the right, as well as a desk and some chairs. That no-frills approach is also echoed in the sound and lighting design, which is quite subtle, sometimes too much so. The show's action is occasionally interrupted by monologues by Dr. Livingstone and even a flashback or two with Agnes and Mother. While it wasn't necessarily confusing to follow when there was a shift in time or presentation, a more aggressive lighting presentation could have helped to make things more distinct.

But ultimately, this show hinges on the three actors and their ability to handle material that is sometimes absolutely riveting, and which sometimes devolves into moralistic speechifying. Erin-Kate Howard is excellent as Dr. Livingstone. She becomes increasingly obsessed with the case as the story goes along, in a very believable, and ultimately quite upsetting, emotional arc. Denise Bartalo as Mother Miriam Ruth is best when sparring with Livingstone or protecting Agnes. She is both stern and desperate in parts, and there are lots of interesting elements to her character's internal struggle. She is not as convincing when delivering some of the longer passages, but some of that fault lies in the script itself.

Agnes is a fascinating, complicated character, and Marcy Savastano brings a lot of skill to the role. In the first act Agnes is shy, timid, almost empty, and as we discover, that's for good reason. But in Act Two her shell is broken, and the raw, damaged human being that is Agnes just comes pouring out. Savastano's performance in the hypnosis scenes was almost uncomfortable to watch, but in the most honest and affecting way.

"Agnes of God" is not a perfect play, but it is an interesting one with some great moments. The nature of the subject matter means that there cannot be any real answers in the play, just discussions. Some of them are well reasoned, others skew toward showmanship for the sake of showmanship. But when the characters are speaking to one another sincerely, wrestling with the nature of faith in a modern world, it is captivating. That is due in large part to the strength of the acting and the tragic scenario that inspired the work.