Doesn't suck to be them

At first glance, the set of "Avenue Q" looks a lot like a rundown version of "Sesame Street." There's a brownstone façade and a stoop. There's laundry strung between a few second story windows. But there's also quite a bit of graffiti on these city walls -- and most of it is swear words and sexual slang. "Sesame Street" for a more mature audience, perhaps? 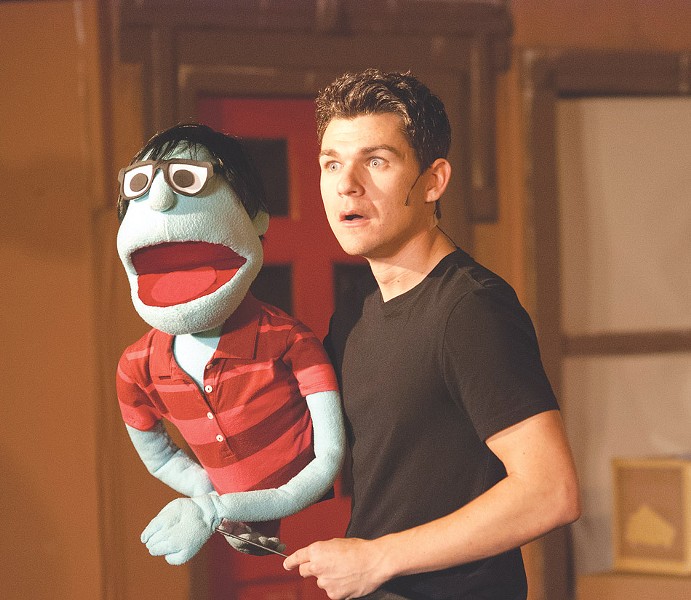 The two-act musical "Avenue Q," conceived by Robert Lopez and Jeff Marx with book by Jeff Whitty, was originally intended to be a TV series but was developed for the stage in 2002. It opened Off Broadway and quickly moved to Broadway in 2003 -- that same year, "Avenue Q" won three Tony awards including for Best Musical. But even though it's in the top 25 longest running shows on Broadway, it's rare to see the show performed on community theater stages. Songs like "The Internet is for Porn," "Everyone's a Little Bit Racist," and "I'm Not Wearing Underwear Today" don't exactly scream "family-friendly musical" -- even though most of these songs are performed by people using puppets.

The plot will ring (sting?) true for many millennials. It follows Princeton, a blue, bespectacled puppet and recent college grad who wonders, "What Do You Do with a B.A. in English?" He moves to New York City, of course, and happily exists on checks from his parents until he finds his "purpose." Princeton is puppeteered by familiar RAPA face Jimmy Boorum, who rarely disappoints in a role, especially one with pop-style vocals. Boorum's excellent comedic timing and intuitive acting skills do not detract from the puppeteering, but add to the overall laughs throughout the show and seem to direct the cast. He also plays the supporting character Rod, a Republican financial advisor who is presumed gay by his group of friends and roommate but won't embrace it himself (he even invents a girlfriend: "My Girlfriend, Who Lives in Canada").

Princeton's love interest, Kate Monster, is puppeteered and acted by Holly Lowden, whose versatile acting and vocal chops make her convincing as both the insecure girl next door and the femme fatale, Lucy.

There's much more to be said about the nine-person cast of "Avenue Q," from the lead players to the ensemble. Most of them puppeteer or play two characters -- in the case of Yunjin Audrey Kim (Christmas Eve), she is affecting a thick Asian accent through the entire show ("The More You Ruv Someone") but still shows off her powerful soprano voice. Tyler Hecht, a recent high school graduate and Stars of Tomorrow winner, puppeteers Nicky and blue Bad Idea Bear. Throughout the show, Hecht switches effortlessly between characters and doesn't miss a beat -- musical or otherwise -- proving his theatrical career will be one to watch over the next few years. Trekkie Monster, puppeteered by Steve Cena, is at once the most heinous and loveable character in the entire show, and Cena's gruff voice and hilarious delivery proved him an audience favorite. The parody celebrity character Gary Coleman (played by recent School of the Arts graduate Danielle Williams) is a humorous plot twist, but its cultural wink may be lost on many of the younger members in the audience.

There are three performance spaces in the Kodak Center for the Performing Arts, and this show is staged in the Executive Dining Room Theatre. It's more dinner theater-style than auditorium-style seating, but an experimental space often works well for an experimental show -- especially when the band, lights, and any screens onstage are placed strategically (and in this case, they are). Under Thomas Markham's direction, the strong, professional cast and crew make the audience forget they are anywhere other than a dimly lit theater watching an entertaining production.

"Avenue Q" is filled with innuendos and metaphors for the seasoned playgoer, and it's a delightful challenge for the audience member who wants to analyze the Tony-winning show. For those who just want to have a good laugh at an inappropriate joke or two, well, that's possible, too.