Theater review: "An Iliad" at Geva

The art of war 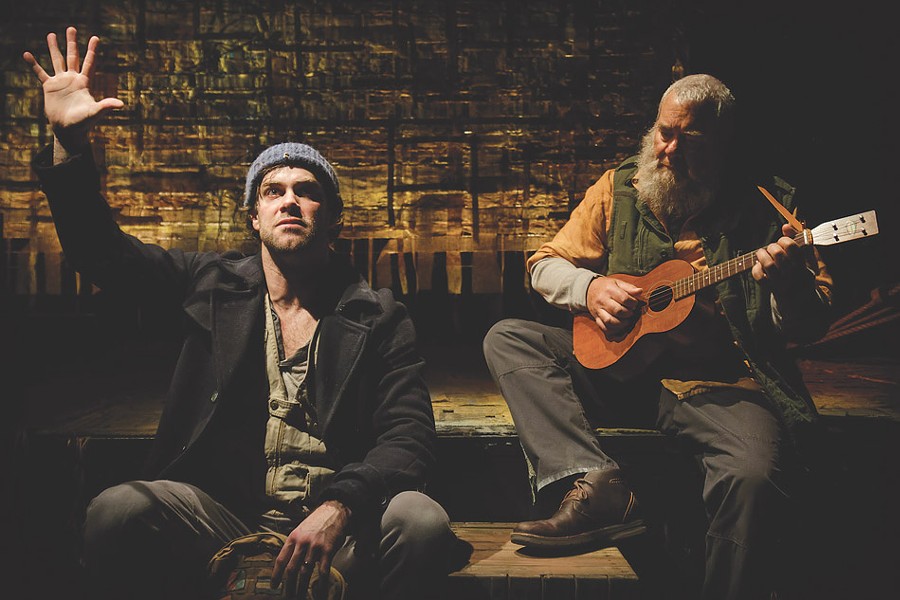 Kyle Hatley as The Poet and Raymond Castrey as The Musician in "An Iliad," on stage now at Geva Theatre Center.

In the last century, photography, video, and the Internet provided the world with astounding visuals of war, but unless a person has experienced war, it's difficult to fully grasp. It can be argued that only those who fight on a battleground understand the depth of that journey.

A modern, award-winning adaptation of "The Iliad," Homer's epic poem, "An Iliad," which opened at Geva Theatre's Nextstage last weekend, exposes war in all its grisly horror, mourns its heroes, and emphasizes how easily it all begins.

Even though many audience members will remember (or know) little of Greek literature and "The Iliad," save a name here and there -- Helen of Troy, Paris, Zeus, Apollo -- the poem has been condensed from its original 15,000 lines into 100 minutes of comprehensive storytelling. Lisa Peterson and Denis O'Hare, who adapted the poem for the stage, have done an admirable job filling a fictional tale from the Bronze Age with relatable analogies for death and war: A phone call or knock on the door at 3 a.m.; a family member who never returns home; a beloved friend who dies too young; a battlefield filled with lost souls -- was that Flanders or Hiroshima? Antietam or Thermopylae?

The message is clear: War is no slave to time, race, or status.

Kyle Hatley (The Poet) delivers the analogies to the audience in a way that's at first abrasive, but begins to feel necessary. He enters the stage with meekness, begging the Muse to inspire him with the inspiration to tell the story, and his energy amps up with each scene. Hatley is described in the program as a "theatre artist that used to play football." He's an imposing physical presence who has a firm command over the stage (vital to a show that only has one speaking role). He paints the battles and bodies in startlingly vivid ways -- in broken, beautiful tones, through whispers and shouts. He yells, sweats, drinks, cries, and swears, telling the story with such commitment that at times it's hard to tell if he's acting at all. By the end of the show, he is emotionally spent. Every ounce of him is left on stage. He forces the audience to partake in his suffering - everyone in the theater is exhausted, and they haven't done a thing except observe from their seats.

But even though Hatley has a commanding presence, the story would be nearly powerless without Raymond Castrey (musician, music director), who provides auditory cues and thematic music on stage for the entire show. Though he never speaks a word, he is the supporting character -- and perhaps the very Muse that The Poet pleads with -- in every way. He seems to send strength to The Poet during the most emotionally draining moments of the show.There were some minor speaker issues in the first few scenes of the show, but they seemed to straighten out by the time Josh Horvath's sound design began to shine (notably, his use of an echo for the gods). The instruments used in the show are fascinating additions, from a ukulele that Castrey plays in place of a more time-appropriate lute to a dulcimer and a large xylophone. There's also an instrument made from PVC pipe and played with a flip-flop. (The show's playbill provides an insightful interview about the instruments with Castrey.)

Both the scenic design by John Haldoupis and the costume design by Georgiana Londré Buchanan are multipurpose, and transcend a specific time period or place. The set most resembles a ship, with rigged ropes on both sides of the stage, several levels of deck-like platforms and a host of wooden crates that Hatley rearranges as he moves through the plot. Scattered around stage are various instruments for Castrey. Though it's subtle, a landscape of rolling hills and a bright blue river is woven into a large tapestry that hangs behind the set. Grant Wilcoxen's mood-inducing lighting designs depict not only the change from day to night, but also the fiery blaze of battle.

To accompany the ship-like surroundings, director Jerry Genochio captains a show that rides its climactic moments like waves on the ocean, keeping the audience on the edge of their seats with emotional lurches and suspense.

A famous quote often linked to Joseph Stalin states, "A single death is a tragedy, a million deaths is a statistic." Near the end of the show, Hatley stands on a dim stage tinged with red lighting and cries out the names of the wars fought in the last three thousand years. As he recites them in chronological order, it seems impossible that so many wars were fought in such a short time. That so many men were lost. That so many generations lived under the far-reaching shadows of war.

At the end of "An Iliad," there is a collective sigh. It is finished, now comes the time for rest and reflection. Not so different, perhaps, from a battle.