THEATER REVIEW: "A Life in the Theatre" 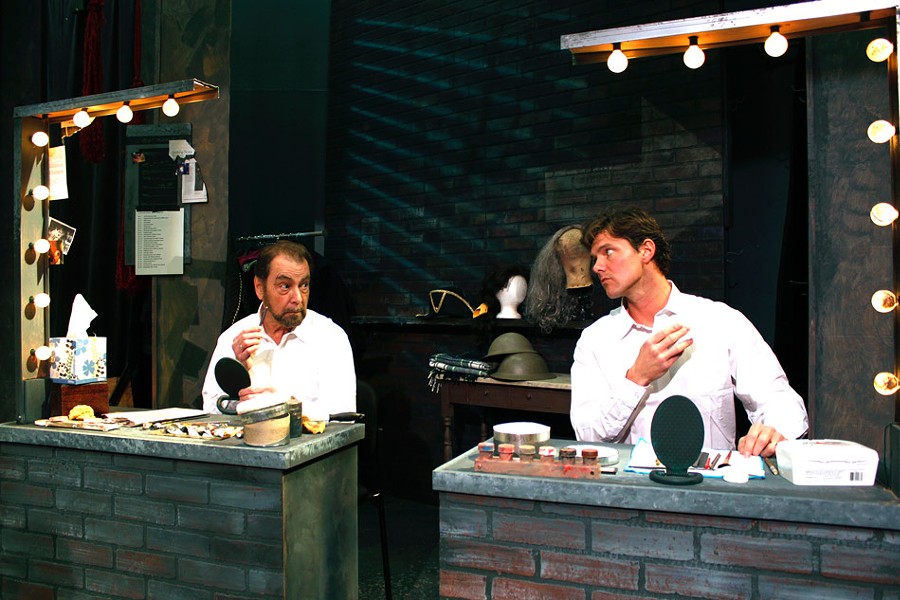 PHOTO BY DAN HOWELL Dave Andreatta and Fred Neurnberg in "A Life in the Theatre," now on stage at Blackfriars.

"A Life in the Theatre"

Playwright David Mamet got straight to the point when he titled his 1977 work "A Life in the Theatre." The play, a combination comedy/drama, gives the audiences snapshots of two theater actors at very different points in their careers. One, John, is young excited, sure that he's on the way up, eager to learn (at first, at least). The other, Robert, has clearly been doing this for quite a long time, and while he at first enjoys having a kind of protégé to mold and play off of, he quickly grows disillusioned by all of the crushing little disappointments brought by both life and career.

It's an interesting work in that it doesn't really include any kind of plot or resolution – it just shows you what it's like to live this life. It's decidedly less glamorous than TV or movies, or even theatrical works, would have us believe.

The show primarily features backstage discussions between the two actors as they talk about their own work, their cast mates, critics, agents, auditions, wardrobe, scripts, and the like. Things start out sunny enough, and it's not a logical leap to suspect that Robert has interests in John that extend beyond just professional development. But those exchanges inevitably turn sour, first on Robert's part and then on John's, so that the bright back-and-forth banter marked by that signature Mamet dialogue becomes laced with spite.

Interspersed with these vignettes are scenes of the actors performing in actual stage plays – a whole bunch of different plays, it seems – most of which go hilariously wrong due to missed sound cues, forgotten dialogue, or prop malfunctions. Anyone involved in the theater will probably groan in empathy as the actors do their best to soldier on, while fans of the theater will get a better perspective on just how delicate the craft is. And how stressful it must be to devote your life to it.

David Runzo directs the show at Blackfriars, and he gets solid performances out of both of his actors, Fred Nuernberg as Robert and Dave Andreatta as John. Nuernberg is especially impressive in the play's darker moments, which make Robert totally sympathetic even though he behaves like an ass for the majority of the show. Nuernberg is totally possessed of himself even as he plays an egotist – an egotist who may have absolutely no reason to think so highly of himself, given the glimpses we get into his professional abilities. But you really do feel for the guy, even after he wastes perfectly good KFC in the midst of a backstage fit.

Dave Andreatta delivers a very mannered performance as John. He seems prim and precise, even downright chipper in the beginning. That changes over time, as his ambition grows and his patience with Robert wanes. Andreatta is quite good at his few dramatic monologues and you almost wish that you could see more of them. He does need to work on projecting his voice, however. In the beginning of the play he was difficult to hear, especially over the theater's heating unit.

One of the issues with the play is that the actors have to undergo multiple quick changes, as scenes last only a few minutes apiece. Sometime it's an easy transition, but with others they have to put on entirely new costumes and reappear on the other side of the stage. In the Blackfriars production I saw, some of these pauses went on longer than they should have, but that's a function of the script more than the direction. I also found some of the incidental music terribly distracting, specifically the aggressively synthesized bits that could have been used in an "After School Special" in the 1980's.

It's important to go into "A Life in the Theatre" not expecting a full story, but merely a character study. At first the scenes may feel disjointed; the script jumps from play to play, discussion to discussion with little or no connective tissue. And even seemingly major conflicts between the two characters are simply forgotten the next time we see them. But that is, it seems, very much life in the theater. These are people who willingly spend their lives pretending to be somebody else – anybody else. It takes a special breed to choose that line of work, and chances are we don't appreciate them the way we should. Go out and hug an actor today.