Putting it all on the line 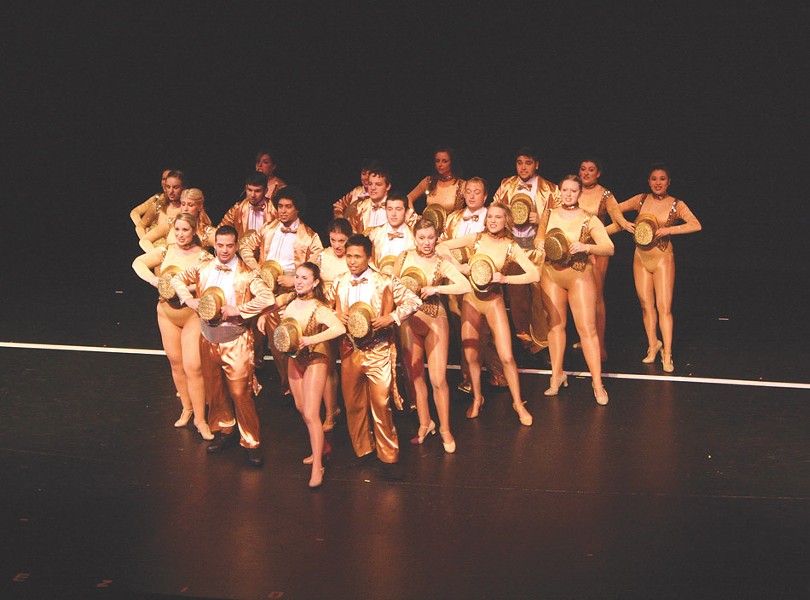 If you were around for the original incarnation of "A Chorus Line" in the 1970's, you may remember the ads touting it as "The Best Musical. Ever." Its award-laden 15-year run on Broadway seemed to bear that out; the show even survived a terrible movie adaptation. Whether or not "A Chorus Line" is the best ever, it remains something special and moving. Michael Bennett's delineation of the lives of dancers who put everything on the line for a part still resonates with anybody who has ever been interviewed for a job — or judged on anything.

In the rare possibility that you've never encountered "A Chorus Line," it's the story — or stories, mostly true — of a group of a dozen or so dancers auditioning for a Broadway show. In addition to their performance try-outs, Zach, the director, asks each of the dancers to talk about themselves. After some initial resistance, they do, in a series of vignettes and songs that range from hilarious to extremely emotional, but all addressing each character's passion: to dance on Broadway.

The required eight are eventually chosen, the others are dismissed, and that's it. Except, in a combination curtain call and grand finale, Bennett allows all his dancers the chance to strut their stuff. This glitzy finale is Absolute Broadway, but if the show is well performed, it also has a bittersweet undercurrent: you have come know and care about all these characters and realize this is not just a chorus line.

"A Chorus Line" is not often seen in community theater because of its demands: excellent dancers who can also be excellent actors. So it is good to see that Pittsford Musicals has found a stage full of them for this very creditable revival. Like "West Side Story," "Fiddler on the Roof," or "Evita," the original mounting of "A Chorus Line" was so distinctive and appropriate that later productions try to be replicas. Directors and choreographers who want to fiddle with the mirrors, the gold hats, or Cassie's red dress — not to mention Bennett's original staging and choreography — do so at their peril. And why not? There's no particular reason to re-solve problems Bennett solved so precisely and elegantly the first time, and which still remain a challenge to dancers.

So while Pittsford Musicals' production looks pretty much like all the others, they do get it right. Director Steve Duprey, choreographer Shelly Thompson, and the well-chosen cast fill the template with enthusiasm, skill, and some stand-out performances. No, the dancing is not at the magically precise Bennett level, and the opening night's dancing was a bit ragged here and there, but one senses the problems could be fixed immediately. The show's opening seemed long (it's hard for it not to, with all those anonymous dancers running through all those routines), but once the auditioners are chosen by Zach, the show kicked in: the performances loosened up, and the show became more focused. The director has kept the through-line firm, and the string of speeches and songs is never a parade of special material. The ensemble really gives the sense of developing from a bunch of individuals vying for a job to a finely tuned group.

This Pittsford production has the kind of cast where you want to mention everybody, but hopefully praise of a few reflects the high level of the rest. This is well-worn material by now, but most of it seemed quite fresh in this group's hands. Adell Cecconi as Val nails every laugh in the famous "Dance: Ten; Looks: Three" number, not to mention the monologue that precedes it. Lauren MacDonough brings a nicely controlled sense of anger to "Nothing," the deceptively jaunty song about the nasty drama teacher. As Sheila, Kimberly Schwenzer seems too young to be quite so jaded, but she plays the character gamely. And William Ruiz does a terrific job with Paul's long account about being a young gay man discovered by his parents as a drag performer. Now that drag queens are a pop-culture staple, this monologue is not exactly the big surprise it was in 1975. But Ruiz's emotional honesty made it the show's dramatic highlight.

The show doesn't really have a lead, though a lot of dramatic weight is put on the role of Cassie, Zach's former lover and a down-on-her-luck dancer of great talent. Cassie was originally played by, and modeled on, the great Broadway dancer Donna McKechnie; it fit her like a glove, and frankly I don't envy anyone who has had to succeed her unique performance in this role. Chelsea Lynn Miller acts this role well, though she doesn't bring McKechnie's vulnerable quality to her acting, though she performs her huge, demanding solo dance very well.

Whenever I see "A Chorus Line," I am always surprised by Marvin Hamlisch's ambitious score. Along with all the now-famous numbers like "One" and "What I Did for Love," the show has a cinematic amount of underscoring, precisely lined up with the dialogue. Despite a few minor glitches in timing, the band, led by Pittsford's longtime conductor Harold MacAuliffe, sounded great. The band is also nowhere to be seen (presumably it's behind the set), which adds to the intimacy and movie-like feel of the piece.

Bigger blockbusters have hit Broadway since "A Chorus Line" ruled the Great White Way, but this show remains a singular sensation, the very definition of a Broadway classic. Pittsford Musicals' production should please those who know the show well, and make new friends among those who don't.