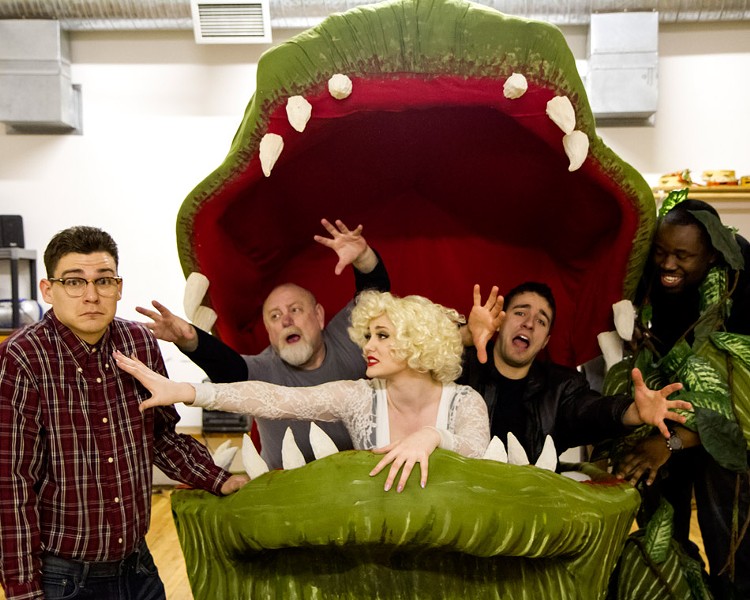 The theater has the power to lift our spirits, to carry us away with its magic, to enchant us with gorgeous sets and wonderful songs. It also has the power to gross us out and scare the crap out of us. If you prefer fake blood to fables and fairy tales, you're in luck: There are two shows this weekend that will fill the stage with guts and gore, and perhaps a bit of humor on the side.

The Rochester Association of Performing Arts presents its production of "Little Shop of Horrors" at the East End Theatre (727 E. Main St.) starting on Friday, March 8. This adaptation of Alan Menken and Howard Ashman's classic rock musical, about a florist who raises an evil plant that needs blood and flesh to survive, is directed by Judith Ranaletta and features choreography by Kris Ashley. "Little Shop of Horrors" runs at 7:30 p.m. on March 8, March 9, March 15, and March 16, and at 2 p.m. on March 10 and 16. Tickets are $20 for general admission and $15 for students, seniors, and groups of eight or more. Visit rapatheatre.org for tickets and more information on RAPA shows.

In its transition from high-school productions to community theater, Wilson Magnet High School's Drama/Video Club presents "Re-Invented: A Dracula-Inspired Goth Rock Musical" at the MuCCC (142 Atlantic Ave.) this weekend. For those who thought that the classic Dracula stories weren't ghoulish enough already, this original musical remixes the old-fashioned scares for the 21st century, with love-struck teenaged characters and a soundtrack featuring music by the Cure, My Chemical Romance, and AFI. "Re-Invented" runs on Thursday, March 7, Friday, March 8, and Saturday, March 9, with all performances at 7:30 p.m. Tickets are $3 in advance, $5 at the door, and free to DVC donors and Wilson students. Go to muccc.org for tickets and other events.