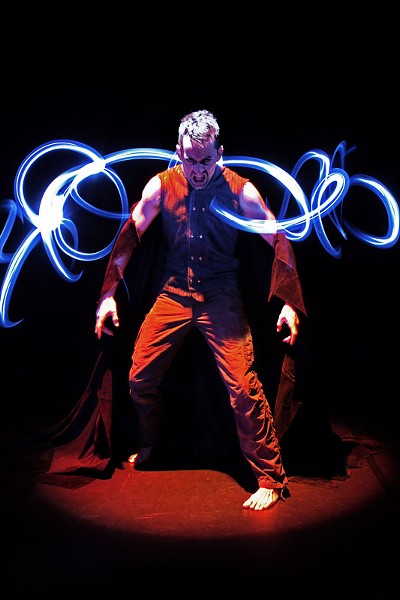 On the surface, Bram Stoker's gothic horror "Dracula" presents a battle between good and evil. But shades of gray lurk and tug at the mind — the damned vampire is a seductive creature if a terrifyingly alien one, and the book is rife with moralizing ideas about women's purity. In the 120 years since Stoker wrote the book, the vampire story has been reinterpreted and performed countless times. And many modern writers have all but taken the teeth out of them; inscrutable monsters have become complicated, undead boyfriends.

But PUSH Physical Theatre is bringing the seductive danger back with its revamped adaptation of "Dracula," which premieres on Halloween night at Blackfriars. The show has four collaborating directors: Blackfriars Theatre's Artistic and Managing Director Danny Hoskins (who wrote the original adaptation and played Renfield in 2009), Wallbyrd Theatre Company Artistic Director Virginia Monte, and PUSH Artistic Directors Darren and Heather Stevenson (who will reprise their roles as Dracula and The Maiden). Jonathan Ntheketha will provide the Voice of Dracula.

PUSH has resurrected the bones of its original adaptation, which is told from the perspective of mad, tortured Renfield (Rick Staropoli). The company is known for its preternatural physical prowess, and from glimpses of the production in the teaser trailer, their skills translate fantastically into supernatural and seductive terror. And the entire focus of the show is on bodies, light, and shadow play — props such as beds and desks are formed by the performers.

Although the production contains no nudity, profanity, gore, or sex, the company disclaims that it entails stylized violence, themes of lust, and may not be suitable for young children. If it were a film, it'd be PG-13, they say.