A look at some of Rochester's niche theatrical troupes

Anyone who believes that theater is a dying art has not spent much time in Rochester; we have always offered a remarkably full range of theater, for consumption and for participation. To use a word theater people enjoy, the Rochester theater scene is very textured; there's a little of everything offered, and something for everybody to see, to try out for, or to get involved in.

Rochester's major theater institutions — they include Geva Theatre Center, JCC CenterStage, and Blackfriars Theatre, as well as Rochester Broadway Theatre League, which brings in high-profile touring productions — are justly praised and consistently good. The same is true for our larger local community theaters, such as Pittsford Musicals and Webster Theatre Guild. But our theater scene also includes many smaller, focused groups presenting a wide variety of plays.

Below find just a few highlights of these specialized groups. For more information about the many members of the Rochester theater scene, look to TheatreROCS! (theatrerocs.org) or peruse the Theater section of the calendar at rochestercitynewspaper.com.

Downstairs Cabaret is definitely a Rochester theater survivor, a downtown fixture for almost 30 years now. (A few years back it also added a suburban location in Winton Place.) While its shows do include many cabaret-style shows, tributes to singers and songwriters, and seasonal fare, DCT has produced some notable serious plays and intimate musicals, including early editions of the inescapable "Nunsense" and "Forever Plaid," and a long-running production of "I Love You, You're Perfect, Now Change!" (set to return this year).

A fairly new addition to Rochester's theater scene, the RLTC's specialty is theater with themes relating to Latino Americans, though actors of all ethnicities are welcome to take part. The group produced its first fully staged show last spring, "The Shadows of our Faces." Its first big production will be in June: a first local showing of the award-winning musical "In the Heights."

Both of these groups operate under the wing of the Rochester Community Players, and their charges are evident: the Shakespeare Players not only do Shakespeare, including the annual Highland Park production each summer, but Shakespeare-related theater, including special abridged versions of the Bard's works for younger audiences. The Irish Players perform a range of repertoire, from modern Irish and Irish-American playwrights back to O'Neill and Synge.

Sponsored by the Penfield Recreation Department, the Penfield Players have presented many crowd-pleasing shows over the years, most recently a revival of Garson Kanin's "Born Yesterday." Along with its staged productions, the group also presents readings of plays in its Reader's Theater.

Only a couple of years old, this company presents plays that became movies during Hollywood's Golden Age, and that showcase women in major roles. The group did this quite successfully in its last production, "Parfumerie," a Hungarian romantic comedy that is indeed best-known as a screenplay, "The Shop Around the Corner."

Each year this group (named after the good Monsignor who suggested its first production) benefits St. Catherine of Siena Church with a production of a good old-fashioned melodrama, with all-volunteer help on stage and backstage.

Another very recent addition to the local theater scene, and an enterprising one at that. FirstLight Players gave its first show last spring, the touching Flaherty/Ahrens musical "A Man of No Importance." This year it was "Death Takes a Holiday," a recent Off-Broadway show by Maury Yeston, the composer of "Nine" and "Titanic."

The repertoire presented by Kalidas over the years has ranged from Neil Simon farces to adaptations of stories from the great Indian epic "Mahabarata." The name for the group, by the way, is derived from Kalidasa, widely regarded as the greatest poet and dramatist in the Sanskrit language.

This group, one of the first of its kind on the country, invites both hearing and deaf actors to its ranks, and has produced a wide range of uniquely presented theater, from Shakespeare to Brecht to mainstream Broadway musicals.

Inclusion and respect are good touchstones for any group, and they are the basis for this group, which places no limits on those who want to perform with it, regardless of physical or developmental disabilities. Artists Unlimited has recently staged large-scale productions of family-favorite fare like "Annie," "High School Musical," and "The Wizard of Oz". The group also sponsors a choral ensemble, Voices Unlimited. There is a waiting list for performers; for information contact Artists Unlimited through its website.

Bread and Water Theatre has been around since 2000. Its approach is borrowed from the "Living Newspaper" productions of the 1930's, offering new and old plays on a variety of personal and social issues, such as dealing with autism or LGBT marriage. 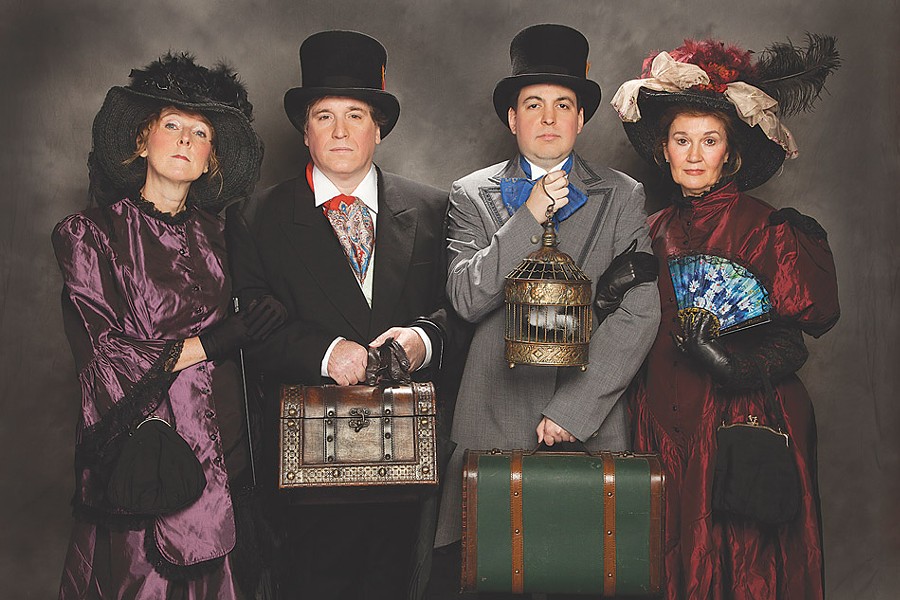 For more than 30 years, the Off-Monroe Players have been all about Gilbert and Sullivan; it is the only local group to regularly present the work of the great Victorian musical team. Having presented the complete G&S output several times over, the group is branching out to related repertoire, including rarely done plays by W.S. Gilbert, and making many charming rediscoveries.