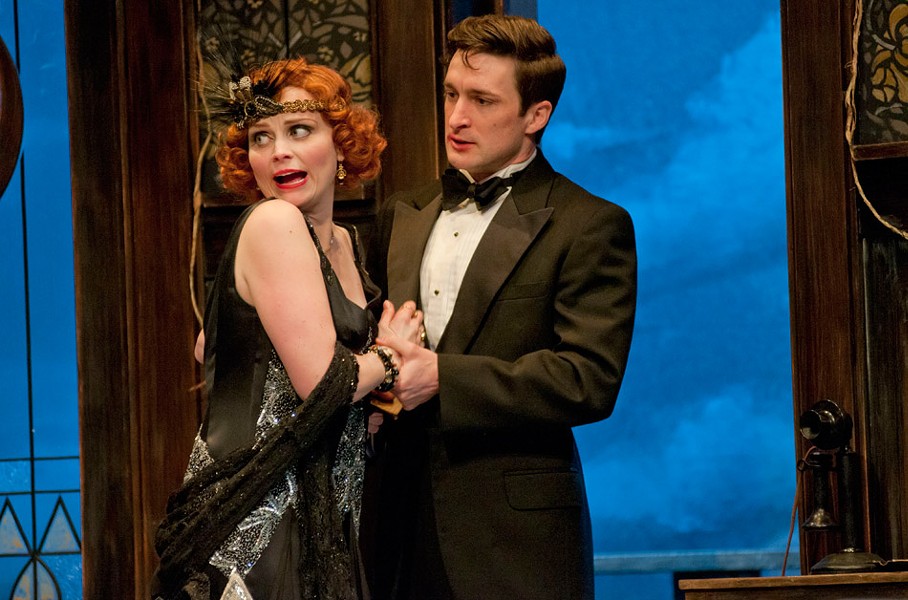 So far, I've seen only half the plays at this year's Shaw Festival, so it wouldn't be fair to draw final conclusions. But at this point the word for this season is — with exceptions — mediocre. Only director Jackie Maxwell's production of George Bernard Shaw's "Major Barbara" in the small Royal George Theatre transformed brilliant words on a page into the throbbing believability of live theater.

The production's three hours raced by in a great whirl of scintillating dialogue, intellectual ferment, and passionate conviction — Shaw and Maxwell at their best. People often complain that Shaw's characters are nothing more than mouthpieces for the master's own pronouncements. Sometimes that's true, but as a friend of mine put it, the actors portraying Barbara (Nicole Underhay), her mother (Laurie Paton), her millionaire industrialist father (Benedict Campbell), and her sweet but ineffectual fiance (Graeme Somerville) inhabit their roles and the convictions of their characters with such splendid persuasiveness that both they and what they believe spring irresistibly to life.

Shaw loves to set convictions against one another, leading to crises of feeling and threats to relationships, and then let everybody argue it out. In this case, the daughter of an armaments manufacturer who will sell to anyone, is a committed member of the Salvation Army because it is everything her father is not. And yet, she will save souls no matter how degraded they are. Shaw's controlling dialogue — he is always the unrepentant puppeteer — brings them into conflict and eventually into ironic agreement of a sort without ever losing face.

Abe Burrows (book) and Frank Loesser's (score) "Guys and Dolls" and Oscar Wilde's "Lady Windermere's Fan," the two largest productions I saw, were — in their mediocrity — the most disappointing. I'm very fond of both plays and found it hard to believe that they could be so ham-handedly directed. In a street-smart fairy tale based on Damon Runyon's short stories, "Guys" shines its delectably garish light on two gamblers and their "dolls," small-timer Nathan Detroit (Shawn Wright) and adorable showgirl, Miss Adelaide (Jenny L. Wright), and the smooth high-roller Sky Masterson (Kyle Blair) and Salvation Army missionary, Miss Sarah (Elodie Gillett). The show's texture comes from Loesser's eclectic score and brilliant lyrics, along with the Broadway types who inhabit a city that comes alive after midnight.

To be fair, the production numbers, "Luck Be a Lady" and "Sit Down, You're Rockin' the Boat," were supercharged, Thom Allison and the wonderful Billy Lake's performance of the title song was winning, and Jenny L. Wright was at her best (by far) during the great comic soliloquy, "Adelaide's Lament." Overall, though, the production was often tedious and charmless despite all the noise and running around. Director Tadeusz Bradecki has little feel for a brassy American musical. One example: the opening comic ballet, "Runyonland," that sets the tone and style of the show, got lost on an overly large stage, and the show slowed almost before it got going. Few of the actors felt like naturals at comedy, and, most importantly, there was no chemistry between Blair and Gillett. Sue Lepage's costume design was too sedate; is tan really the best color for a lighthearted view of Broadway's demi-monde?

The second act of "Lady Windermere" was better than the very slow first act. Yet even though the production finally picked up, it never found the pace and rhythm it needed. A birthday ball for young Lady Windermere brings to London society an mysteriously worldly woman, Mrs. Erlynne, who entrances men by her intelligence and eroticism just as Lady W does it through her guilelessness and innocence. The long ball scene is cleverly written and crucial to the plot, but the staging was static and clumsy.

The plot turns on Lady W's moral purity, Mrs. E's true identity, and how much honesty a good marriage can bear. Just who is this Mrs. Erlynne, and what does she have to do with the Windermeres? Wilde's witty dialogue is in full flower as the plot works through deceptions and misunderstandings that threaten the Windemere's marriage, leave their good friend Lord Darlington rootless, and expose the identity — and, ultimately, the decency — of Mrs. E.

Wilde has written a delicious 19th century melodrama but enlivened it with the new attitudes of the approaching 20th century. Its brilliance and continuing appeal lie in its being a traditional play given spice by Wilde's sense of modernity. The encounter between the two ways of seeing the world is shocking, spirited, show-offy, and irresistible. Unfortunately, director Peter Hinton's drearily self-conscious "vision" keeps intruding on what's important — some artsy-fartsy posing at the start that adds nothing, the inexplicable diminution of Darlington as Lady W's friend and potential lover, and an anachronistic folk-rock score that spells out what only an exceptionally obtuse audience would fail to understand. Most significantly, I find it impossible to believe that any man would find Marla McLean as Lady Windemere or Tara Rosling as Mrs. Erlynne entrancing.

Like "G&D" and "Windermere," "Our Betters" relies on deceptions in the profession of love and friendship. The Shaw is currently working through the plays of W. Somerset Maugham, a playwright and novelist whose reputation has declined since his 1965 death. "The Circle" and "The Constant Wife" were good plays worth reviving; "Our Betters" isn't quite in their league.

The play's first two acts are crisp and bright and, in their way, brilliant because the female characters who dominate the plot are, themselves, bright and brilliant with a gift for talk that makes Maugham's entertainment gay and frothy despite the growing sense that these women endure lives of — dare I say it — quiet desperation. They are American heiresses who went to Europe to marry poor aristocrats; it was a trade between women with money and men with titles and social position. Edith Wharton called them "The Buccaneers" in her final novel, but now they're 10 or 20 years older, their marriages have gone sour, and they have to live by their wits, their genius for manipulation and gossip, and their attraction to rakes and bounders. At its best, the play's appeal rests on the smart talk and the sparkling performances of Claire Jullien, Laurie Paton, and Catherine McGregor, all living splendidly in drawing rooms by Ken MacDonald and costumes by Charlotte Dean. Unfortunately, the sorting out in the last act takes so long that you pretty much stop caring that none of the women has the capacity to change.

The final play I saw in my first trip, "Trifles," is actually two very small plays done as the Noontime Theater—"Trifles" by Susan Glaspell and "A Wife for a Life," Eugene O'Neill's first play. They are indeed trifles, though the performances of Kaylee Harwood and Julain Molnar in the Glaspell play were strong, sure, and defined in the space of 20 minutes.

Check back next week for Michael Lasser's second round of reviews of the 2013 Shaw Festival line-up.