From her front driveway, Kelly Rush has a perfect view of a neighboring house's buckling roof.

The vacant house is surrounded by well-maintained properties on a quiet street in Irondequoit's Sea Breeze neighborhood; it's the rotten tooth in an otherwise perfect smile. The house has fallen so far into disrepair that Irondequoit officials plan to demolish it this fall; the cost will be attached to the property as a lien.

"It doesn't even look sound from here," Rush says.

The woman who used to live in the house had block parties and was a trusted figure in the neighborhood: children knew that they could knock on her door if there was trouble, Rush says. But the neighbor died seven years ago, and the house has been vacant and largely unmaintained since, she says.

The property has also been the subject of on-and-off foreclosure proceedings since 2011; nobody's ever tried to sell it, as best as the neighbors can tell. At this point, they just want the property to be reused for something productive: a garden or a new house; anything would be better, they say.

"The only thing I can say is tear the damn thing down," says a neighbor who declined to give her name.

The house is an example of a zombie property, which are single- or multi-family houses that are trapped somewhere in the foreclosure process. The owners and lenders leave them for dead — or maybe undead is the better term, since the houses can become shells of their former selves, trapped between life and death. And as they linger, they drag their neighborhoods down with them.

Properties enter foreclosure because the owner stops making mortgage payments for any number of reasons: job or income loss, illness, and death are some of the common ones. And lenders may start a foreclosure, but stop without completing or formally terminating it. In some cases, the delinquent properties are in such rough shape that the banks decide they aren't worth the hassle or further effort; if the lenders completed the foreclosure, they'd be responsible for the properties and their troubles.

But new state laws will take effect later this year that local officials and advocates say should provide some relief to neighborhoods struggling with zombies. The laws give new inspection, property registration, and maintenance responsibilities to lenders at the start of the foreclosure process.

State lawmakers say that they hope that the new requirements encourage banks to give greater thought to initiating foreclosures and provide them with an incentive to see the cases through promptly.

"Now, all of a sudden, lenders have to make a decision -- either I'm in it or I'm not -- and they can't do this halfway dance that they've been able, legally have been allowed to do," says Rebecca Case Caico, a consumer attorney for Empire Justice Center, a nonprofit public interest law firm that works on housing issues.

No single, definitive figure exists on the number of zombie properties in Monroe County, but one of the new state laws creates a zombie property registry, which should help local officials dig out that number. And more importantly, it should help them identify properties in the foreclosure process that could go vacant or may already be empty.

A report released by the State Senate's Independent Democratic Caucus says that Monroe County could have just under 600 zombie properties, including 425 in the City of Rochester. The report was prepared with the assistance of staff from the offices of Senators Joe Robach and Rich Funke, who combed local records to find potential zombies.

The county has thousands of houses, so 600 may not sound like a big deal. But just one zombie property can drop the value of a block's worth of homes. The IDC report pegs Monroe County's zombie-related property value losses at $9.4 million.

The IDC report is best viewed as an estimate, and it concludes with blurbs in support of a few anti-zombie property bills. One of them is a Funke bill that would create a quicker foreclosure process for vacant houses.

The report only looks at communities that are part of Funke's and Robach's districts, though combined, the two lawmakers represent most of Monroe County. And each town in both districts has at least one zombie property.

Not all zombies are decaying hulks.

A zombie house on Gates' west side has sat empty for close to a decade and, if not for a basement fire, probably wouldn't stand out to passersby. Its doors have been secured and an old hot tub sits on the back porch. But the house has clean paint, intact windows, and a mown lawn.

Neighbors keep a close eye on the property and make sure basic upkeep is taken care of.

Wally Bennett and Richard Grammatico live next to the house on opposite sides, and the first few years it was empty, they took turns mowing its lawn. The town now handles that task.

Bennett still trims the hedges around the house, and Grammatico got rid of discarded furniture and debris that sat on the property's lawn following the basement fire. Some of the neighbors help keep snow from piling up in front of the house, too.

"It's our neighborhood so we're trying to keep it halfway decent," Bennett says.

At one point, foreclosure proceedings were completed and the property was sold at auction, but a judge later rescinded the sale for reasons that are unclear.

The lender has since released its mortgage lien on the property, but the property's status is complicated by overdue taxes. The county sold several years' worth of the debts to two private companies, which now hold liens against the property. (The original owners of the house are dead, though the house is still owned by the wife's estate.)

Deaths, tax debts and other liens, and bankruptcies are a few of the things that can complicate and stall foreclosure proceedings and, in turn, keep properties in a suspended state.

In response to the tangled, drawn-out circumstances around zombie properties, communities including Gates, Greece, Irondequoit, and Pittsford created local registries. Lenders can be fined if they don't tell the towns when they initiate a foreclosure against a borrower.

By making the lenders register the properties, officials can keep track of houses that are in default and vacant, and they have a contact for the properties, says Gates Town Board member Steve Tucciarello, who proposed his town's law.

"This way, when we have issues, we can get ahold of the proper people to make our neighborhoods look better," he says.

Neighbors have a part to play, and many of them realize this. They keep watch and let their local leaders know when trouble is brewing. Officials say that input is crucial.

"Sometimes, our best defense is neighbors," says Gary Kirkmire, the City of Rochester's director of inspection and compliance services. "Even when we don't know something is vacant yet, usually the first person to know, especially if there's owner-occupants in the neighborhood, it's the neighbors."

Properties that are vacant for a long time have some common problems, whether those properties are zombies or are stuck in some other circumstance. In some cases, the worse that'll happen is that wildlife moves in.

But in other instances, the properties pose big risks to the people living near them. 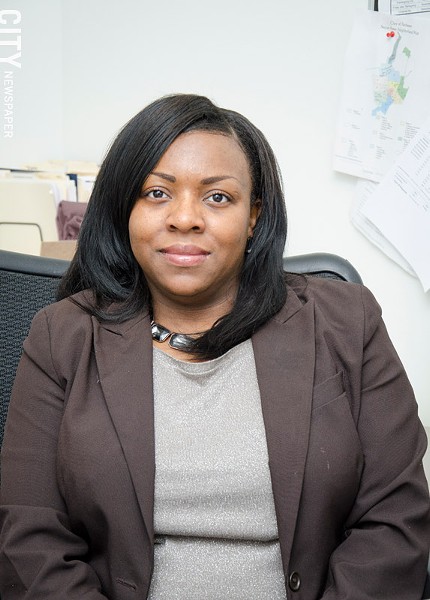 LaShay Harris, a county legislator and past president of the 19th Ward Community Association, knows this from experience.

The house next to hers sat vacant for four years while it was caught up in an estate issue; it wasn't in foreclosure, so it wasn't a true zombie property. But one day, someone set the property's garage on fire and the blaze spread to Harris's house. The damage was so extensive that Harris couldn't move back in for three years, she says.

There have been a few big fires at vacant houses in the 19th Ward over the past few years, she says. These properties can be magnets for other types of trouble, too. They can attract vandals and squatters, for example, and become sites for dealing and using drugs. And in many areas, people strip unoccupied houses of copper pipe and wiring, which can take away from the properties' appeal to potential buyers.

The biggest obstacle with zombie properties is that they are stuck in a state where, for the most part, nobody can touch them: a realtor, a buyer, the city, and the county included, Harris says.

"That kinds of holds the whole neighborhood, as well as the city and the county, hostage," she says. "And I think it's wrong."

Harris says that the city's been good about taking down some of the worst properties in her neighborhood, though she and other 19th Ward activists would like to see more of the properties rescued before they reach a state where the only choice is demolition.

Some of the sites have been repurposed for community use, such as the lots on Trafalgar or at Depew and Forbes that evolved into community gardens. But many remain vacant after demolition.

Harris says that governments should do more to make sure that the zombie properties are secure, and that the new laws are a good start.

Monroe County Clerk Adam Bello says that more needs to be done on zombie properties at all levels of government. He formed a vacant and abandoned property task immediately after he was appointed to the office earlier this year. The task force is scheduled to issue a report with recommendations within the next couple of weeks, Bello says. But the office has started providing local governments with monthly updates on foreclosure filings and judgements.

"It lets them know who filed the foreclosure, so they know who the entity is that's responsible for that, so they have a contact: they know who owns a property, who the liens are filed against," Bello said during a June interview.

The clerk's office also makes nightly data dumps between its system and the City of Rochester's. Kirkmire says that the city uses the information to help identify properties that are vacant or could go vacant.

Many community leaders and elected officials say that the best way to fight the zombies is to keep the properties from going vacant in the first place. And that means keeping people in their homes whenever possible.

Several local nonprofits and agencies have effective foreclosure prevention programs and counseling, and communities should do more to promote them, says Harris, the county legislator.

Homeowners also don't have to leave their homes until the cases are settled, though many don't realize that and move out early in the foreclosure process.

"I think the foreclosures occur because people are embarrassed to reach out for help," Harris says. "They're embarrassed to seek help from people that are close to them. It's really a touchy subject."

But realistically, there is no quick fix for the plodding but dire threat of zombie properties. It's a complex problem that will require flexible, multi-pronged approaches over time.