The year of living dangerously — a 2021 arts recap

December 29, 2021
In normal circumstances, it would have been a beautiful summer evening.

Admittedly, I was at Constellation Brands-Marvin Sands Performing Arts Center for the opening act, Rickie Lee Jones. Yet over the half-dozen or so times that I have seen the night’s headliner, I had come to appreciate Brandi Carlile as well.

But these are no longer normal circumstances. I was extraordinarily uncomfortable. In my fourth-row seat, at center stage, I was surrounded by dozens of Carlile fans. And behind us, beneath the pavilion and spread across the lawn, thousands more Carlile fans. Many lustily bellowing along to their favorite Carlile songs.

I had no clue if these strangers had been vaccinated. Or not vaccinated. Concern crept in: If I’m going to contract COVID-19, this is the moment.

I emerged from the concert just fine. And there were no reports of huge swaths of Carlile fans falling ill after the show.

Nevertheless, we absolutely cannot overlook this grim reality: 817,000 Americans have died from COVID-related illnesses. And from what I’ve been reading, as we retreat indoors this winter, the spread will increase. By spring, it’s estimated that 1 million Americans will have died from COVID.

That is not factoring in the many who have contracted COVID and survived. Some I know are musicians, exposed at their gigs while they entertained us. Some had minor symptoms. Just a few days of discomfort. But others suffered through a lingering illness. Loss of taste and smell. Chills, fever. Hallucinations, even.

This year, I have accepted the fact that everything has changed.

I’ve spent 45 minutes with remote in hand, clicking through the various platforms and channels, finding nothing of interest.

After three decades of a front-row seat to this community’s arts scene, where I was often going out four and five nights a week to hear music — or to just sit discreetly in a bar, eavesdropping on your conversations — I now feel disconnected.

And many of our musicians and artists feel the same.

Some opportunities remain. You can find a show, perhaps spot a provocative new mural on the side of a building. But clearly, culture is struggling to be seen and heard. It’s as though the voice of our society — and that’s what the arts is — has been muted.

For my part, I try to keep it small. Small gatherings at the homes of friends. Small venues. Restaurants and clubs that check proof of vaccination. The biggest event I’ve been to in months was the Tom Waits tribute show a couple of weeks ago at Iron Smoke Distillery.

I was not surprised by the high level of musicianship I witnessed that night. That’s one of the great joys of living in Rochester.

But past is prologue, if I read the news correctly. Again, that’s the science I’m reading. Not the politics. And 2022 is looking like it will be a lot like 2021.

Yet the virus creeping through our landscape has affected the arts, but not the artists.

Throughout the year, the arts did its best to dance beyond the reach of COVID. Two nights at Abilene Bar & Lounge celebrating the legacy of the late Chuck Cuminale and his band, The Colorblind James Experience. Rochester’s indie-rock favorites Joywave emerging from a desiccated summer tour with a free outdoor show for thousands at a KeyBank Rochester Fringe Festival that cautiously skirted past a September lull in the virus.

It has been a year of incongruity. U.S. Senate Majority Leader Chuck Schumer stopped by the city’s underground-music torch carrier, the Bug Jar. It was a photo op, to announce the $16 billion Save Our Stages grants from the U.S. Small Business Administration. “Pretty hip place,” Schumer said as he stood beneath the Bug Jar’s most notable interior décor: kitchen appliances and living-room furniture, bolted upside-down to the ceiling.

I look back at the past year, the stories I wrote, and come across “Of and Between,” the debut album by the uncategorizable ensemble fivebyfive. That music surely would have happened without COVID-19 forcing the Rochester band into studio exile. But, “the pandemic just put it into overdrive,” said the quintet’s producer and studio wizard, Marc Webster.

So fivebyfive had time on its hands, and it was well spent. It emerged with a studio-driven sound that is a collision of classical, jazz, rock, and audience-collaborative “community art pieces.” Music inspired by the colorful collage photography of New York City’s James Welling — and his exhibit at the George Eastman Museum — and the stained-glass art of Philadelphia’s Judith Schaechter, who had a show at the Memorial Art Gallery.

A fusion of the arts.

“Musicians who are curious,” said Laura Lentz, the group’s reed player, “need to do things that are not expected.”

The Campbell Brothers did something unexpected as well.

Darick Campbell was weakened and hospitalized by heart troubles in 2020. His brother Phil Campbell said that looking back, the symptoms now sound to him like COVID; at the time, we were still understanding what this thing was.

When Darick died in May 2020, Rochester’s sacred-steel gospel stars were reeling. As Phil said, “obviously those are huge shoes to fill, and we don’t fill them, quite frankly.”

Yet with their touring for 2021 wrecked by COVID, The Campbell Brothers found a way to keep those shoes moving forward, and a way to keep Darick alive: “The Campbell Brothers Present John Coltrane’s A Love Supreme” is a live recording of the band, from 2015, reinterpreting what may be Coltrane’s finest album. For this new version, Darick lives on alongside Phil and Chuck Campbell. Music that is a scintillating, soulful wailing of guitar strings and irrepressible groove. Coltrane himself was on a journey from drug addiction when he recorded “A Love Supreme,” a journey that mirrors the Campbells’ path as Christians. “It’s the same kind of walk,” Phil said, “that’s the parallel we drew.”

You always hope it is a long walk. You seek connections. Looking back at the past year, I think of my friend John Borek. 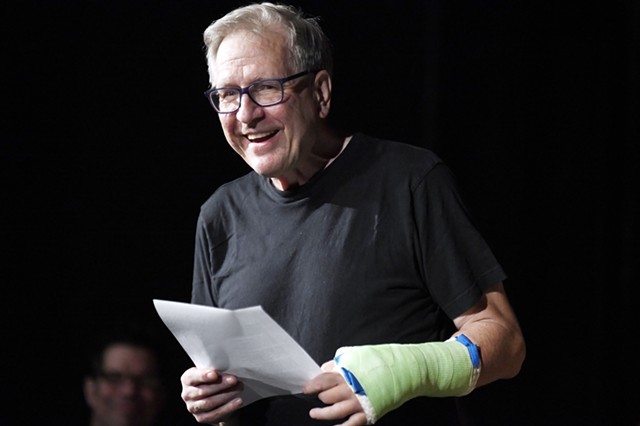 Borek already had a legacy in this town, as the owner of The Village Green, the great, now gone, independent bookstore on Monroe Avenue. Borek was a community activist as well. And at age 58, he improbably — or probably, for those familiar with his quirky nature — evolved into a performance artist. His resurrection of “Moose Murders,” often called the worst play to have ever opened on Broadway, was the headline of his theater legend. But he was also the artistic director at MuCCC, the Multi-use Community Cultural Center, staging events that were sometimes relevant, but often deliberately farcical.

Borek’s wife, Jackie Levine, was a significant presence in the city as well, directing the University of Rochester’s study abroad program. I usually found the couple most Saturdays holding court at the back table at the Best Coffee at the Market coffee shop at the Rochester Public Market.

But Jackie was growing ill with a rare neurological disease. And in 2020, it was clear she was about to die. She asked to be moved from her hospital room to her home in the 19th Ward.

Borek, who had also been hospitalized in his own fight against leukemia, arrived at her side. The coronavirus pandemic was still new. No one was quite sure of what it was, and how it might affect compromised souls such as John. But he would not allow himself to be disconnected from Jackie in the midst of this uncertainty. He was wearing a Hazmat suit as he held Jackie’s hand when she died.

Ten months later, John passed away as well. COVID was in the air, but it was the leukemia that got him. Or maybe it was losing Jackie, his wife of 44 years.

This past June, there was a memorial service for the two of them at the place they loved so much, the Public Market. And in this year of tragedy, and 800,000 Americans dying of something we cannot even see, I’ll never forget what their friend Eve Elzenga said. I used the quote in the closing paragraph to the best, and most painful, piece I wrote in 2021.

“They had the best death,” Elzenga said of this inevitability, “anyone could ever hope to have.”