The world on a shelf

The process of exploring some of Rochester's ethnically diverse grocery stores and speaking with their respective owners reinforced the notion that we are still a community of immigrants. It's perhaps not as distinct as it once was in the past, but among the aspects of any culture that pass on through generations, food is probably the one that endures the strongest as it tightly bonds people to their lineage.

Although these stores are distinct, and cater to different clientele, the common denominator among them is that, according to their respective owners, people shop at these stores to find products that link them to and remind them of their homeland and heritage. City Newspaper looked at six of these stores that offer food, ingredients, and services unique to our community that the larger supermarkets just can't provide.

Do you have a favorite culturally diverse grocery store, or a story attached to one? Share it on this article at rochestercitynewspaper.com.

The cornerstone of the supermarket-sized Asia Food Market is its fish market that is supplied from New York City at least twice a week to keep things as fresh as possible. And if we're talking about freshness, you can't get any fresher than the live seafood kept on site for those that want them dispatched to order. Tilapia, eel, frogs, crab, lobster, and shrimp are on display still swimming or crawling around in their cases. The prices are quite affordable and the workers will clean and scale any fish for you before you leave.

Of course, there is the large produce section and a selection of dry and fresh noodles that will make sure people can make their traditional dishes regardless of where they came from in Asia. This was a conscious effort that extended to the seasonings and spices that stock the shelves as well. 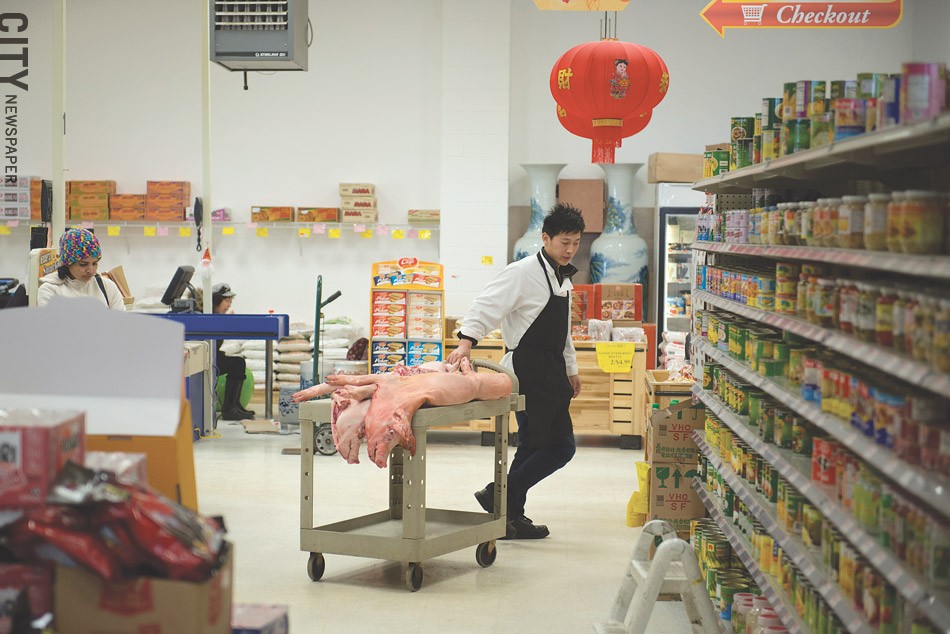 Another major attraction is the Chinese style bakery that was installed as part of the renovation and expansion completed in 2013. Before then, you had to venture to a Chinatown in a larger city like Toronto to fully dive into the world of egg tarts, BBQ pork, and coconut buns and even a scallion hot dog bun. Walking away with an arm full for under $10 is easy and a fun way to try a bunch of different flavors out without breaking the bank.

On your way in or out of the store, make sure to check out the dim sum and roasted meat section where you can grab a roast duck, some char siu pork or even sliced pig ears to get the base to a flavorful dish at home without the extra cooking effort. 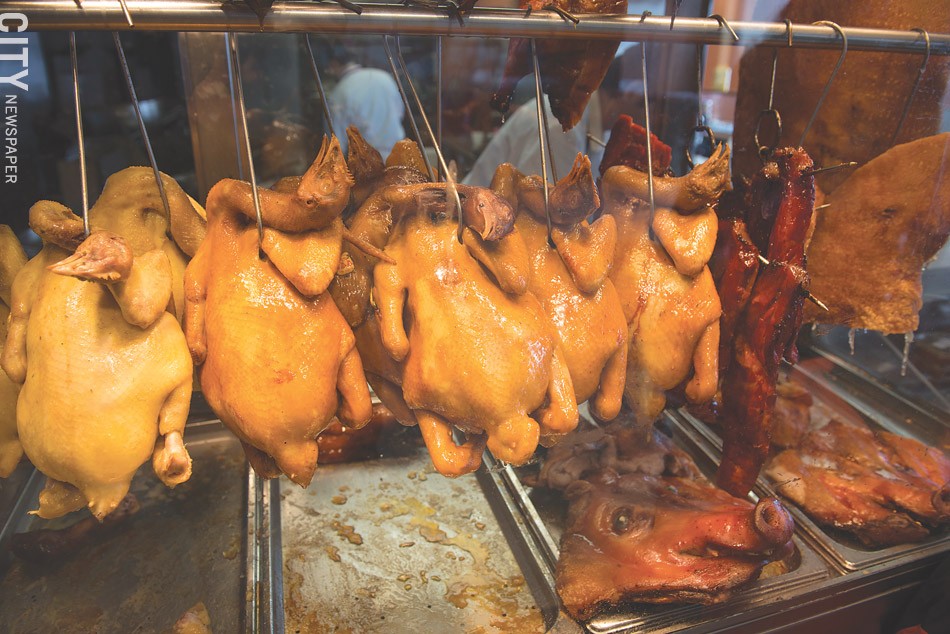 About 80 percent of Europa Deli's customer base has Ukrainian, Russian, Polish, Lithuanian, Romanian, Moldavian, Turkish, or Israeli roots. Correspondingly, these are the regions whose foods are represented in owner, Albert Beyder's store. To him, all of his products are vital: "If it wasn't important to our customers, it wouldn't be here." Europa Deli has been in business since 1996; Beyder purchased the business from his uncle in 2005, and he has since strived to remind his customers of home by providing things they could buy in their home countries.

Pierogies and dumplings occupy substantial freezer space, and the varieties span a substantial range of fillings. Fish also gets top billing at this store: in vacuum-sealed packages, whole mackerel, sprat, salmon, and herring. In cans, Europa stocks sprats, sardines, herring, and cod liver. Also in cans, you'll find pâtés of pork, tuna, salmon, and chicken. Several shelves contain the store's large selection of jarred salads, and ajvar, a bruschetta-like spread, commonly made with red peppers and/or eggplant, while others are filled with Eastern European dried grain staples, such as barley, wheat, and millet (along with boxed quick-cook versions). Jams and preserves from numerous countries line the shelves, as do many kinds of wafer cakes and cookies.

Refrigerated behind Europa's deli counter, you'll find farmer cheese, Lithuanian cheeses, as well as Fetas from Israel, Bulgaria, and Greece. As for meats, there are Russian-, Jewish-, and Hungarian-style salamis and kielbasas, Russian-style bologna, smoked chickens, and salo, a traditional Eastern European food consisting of cured slabs of fatback (akin to lardo from Italy).

The refrigerator case houses individually wrapped Polish cheesecakes, which are delicious bars of farmer cheese coated with chocolate. Beyder stocks an ample and colorful selection of bulk Eastern European candies, chocolates from Lithuania and Ukraine, ice cream products from Lithuania and Russia, and baked goods from bakeries in Brooklyn.

In business since 1977 (at its current location since 1996) Halal Market and Meats also draws customers for its high-quality meats. Halal Market offers beef, lamb, chicken, and goat — all locally sourced and raised without hormones, antibiotics, or additives — that has been slaughtered according to Islamic law (as a sacrifice to God). Because the store's owner, Yavuz Toklar, slaughters all the animals himself, his customers are able to obtain hard-to-find animal parts.

Halal Market caters to Rochester's Middle Eastern (primarily Turkish, Lebanese, Yemeni, and Syrian) community, according to store manager, Yunus Toklar. He says the store provides them with "a feeling of home" by offering products, flavors, and brands of common household products that they're used to from their homeland. The market carries a wide range of sesame-based products common to the Middle Eastern diet, including halvah, tahini, and candies. Dates and figs also play a prominent role in many Middle Eastern cultures, and they too are well represented here, as are olives and olive oils, uncommon fruit preserves and syrups, and Middle Eastern spices. You'll also find an impressive array of dried grains and beans, including such Middle Eastern staples as bulgur and freekeh.

There's no shortage of sweets here, either: an extensive selection of unique cookies, biscuits, and candies occupy much of one aisle, including several varieties and flavors of the aptly named Turkish delight. Another aisle boasts jars of all sizes of pickled shallots, garlic, okra, mushrooms, turnips, cabbage, and cucumbers.

The Toklar family opened their café, which is connected to the market, in 2010. The café serves both Middle Eastern and American foods, some prepared, some made to order, giving those who observe Halal the opportunity to enjoy both styles of cuisine. The two savory items I've tried — the lahmacun (Turkish pizza) and the shawarma — are the best I've had in Rochester, and the baklava is second to none.

In 1948, when Albert Lipman opened Lipman's Kosher Market on Joseph Avenue, there were no fewer than 16 Kosher meat markets in Rochester. Now, Lipman's — on Monroe Avenue in Brighton since 1950 — is the only one. In fact, it is the only certified Kosher meat market between Rochester and Albany. Aharon Baruch, who trained in meat processing and butchering under Lipman, purchased the market with two partners in 1996 and is now the sole proprietor.

Lipman's carries an astonishingly wide variety of Americanized and Middle-Eastern Kosher products (non-perishable, refrigerated and frozen) in its small space. But according to Baruch, it is the Kosher meat counter that draws customers and keeps them coming back generation after generation. Lipman's sources all of its beef, veal, chicken, turkey, lamb, and bison from New York farms that use no hormones or antibiotics. All of Lipman's meat is processed and butchered in-store, and — rare today in larger stores — Lipman's will custom butcher any cut of meat for any customer. In addition to the fresh meats, Lipman's also offers Kosher cold cuts, and prepared foods, like meatballs, shawarma, cooked brisket, schnitzel, knishes, and various pickles and salads. One of Albert Lipman's credos, according to Baruch, was to "serve customers top-of-the-line products so they'll always come back."

Baruch is committed to the role his market plays in community outreach: He offers flexible payment options for those in the community that need it to "ease the pain of keeping Kosher," and the store offers free home delivery for elderly customers who cannot easily shop at the store. While Baruch and I were discussing this, a customer in the store, unsolicited, offered: "He makes sure you get what you want. There's a familiarity here. This place is a cornerstone of the Jewish community in Rochester."

If you want to dive into making real Mexican cuisine, your best bet is to make the short drive out to Lorenzo's Mexican Products in Brockport.

Lorenzo's carries some of the best brands of commercial corn and flour tortillas including El Milagro, a go to for many Mexican restaurants that don't make their own. Queso fresco (crumbly) and oaxaca (mozzarella style) cheeses are available in the fridge case to up your cheese game from a "Mexican" blend. I also love the fact that you can get Mexican crema which is fresher than a sour cream and has a thinner texture. Drizzling some crema spiked with lime or chipotle on top of a taco is another way to add pop without blowing out people's taste buds.

Toasting and grinding dried chiles can yield a complex chili powder that is more aromatic than a bottled version and an easy way to bring huge flavor without doing the prep every time. Lorenzo's carries six different dried peppers from the sweet guajillo to the medium ancho and pasilla to the more spicy chile de arbol. Get creative and make your own blend of peppers to add to your favorite chili recipe or try and create a mole or true enchilada sauce.

To top it off, Lorenzo's makes tamales on site on the weekends and makes them available for $5 for a bag of five. If you haven't tried them before, they consist of a masa base with either a pork or chicken filling that is steamed inside a corn husk shell. I always try to walk away with a bag of these delights to warm up at home in the microwave and get a taste of Mexico throughout the week.

Chander Sud has been a part of Rochester's Indian food scene for more than 30 years, starting with the India House market back in the day. And since 2010, Sud has been the principal owner of Spice Bazaar. It is conveniently located right next door to Raj Mahal — run by Sud's sister Ruby — creating a convenient way to get either restaurant food or the ingredients needed to make your own at home. 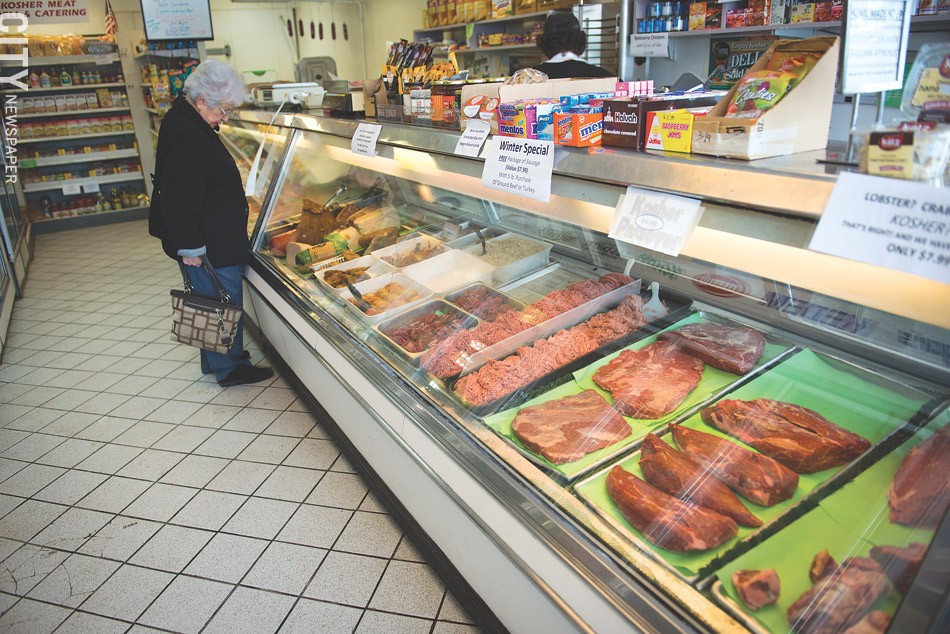 The goal of Spice Bazaar is to provide a base of ingredients with the freshest produce they can get, along with a ridiculous selection of spices for any dish you can imagine. The market's produce section is among the freshest I have seen in any grocery store, and according to Chander, a good selection of it is flown in from South America where they're grown. He says the produce is often on his shelves within 24 to 48 hours of being picked. From spicy peppers to turmeric and ginger roots to even more exotic vegetables like chayotes and karela (bitter melon) that all looked exquisite.

From a spice perspective, Spice Bazaar's selection is quite extensive. This is a great opportunity to spend some time creating your own masala (the Indian term for a spice mix). Your own personal masala could be the base for a tandoori rub, a stewed lamb dish or even a chai blend that perfectly balances warmness and spice. If you don't want to take the effort to toast and grind your own, I saw mixes in powder or paste versions that covered almost every base of Indian food. Specific versions were available for paneer, fish, veggie or different meats for common dishes like tikka masala, makhani, biryani, and even more to explore.