The woods are your classroom

A group of about 15-20 parents and children meet at the mouth of a trail at Ellison Park on a gray but relatively still Tuesday morning in early January. A casual hike is in the works; it's the 18th weekly meetup of the Free Forest School of Greater Rochester, led by its director Laura Lee Jones. Before the exploratory walk begins, Jones lays out the ground rules: Kids take the lead, no tech devices, it's ok to break off into smaller groups.

"We trust you to respect the forest and one another," she says with a smile.

Jones started training to be a free forest school facilitator in October 2018 and created the cooperative, volunteer-run Rochester chapter of the nonprofit Free Forest School with the assistance from the larger national organization.

As stated on its website, Free Forest School's expressed purpose is to encourage children's natural curiosity, their desire to learn, and their affinity for nature. Parents and other adult caregivers are seen as "protectors of children's play," with the goal of instilling pride and self-empowerment while also raising kids to care for their environment. Local leaders such as Jones, as well as municipal and community organizations, provide much-needed opportunities for kids to engage in "unstructured play" outside, which many schoolchildren cannot readily get in traditional educational contexts. freeforestschool.org/free-forest-school-greater-rochester-new-york

"Kids already have a connection to the natural world," Hayes says. "It's coded in them, you know? There's a spark there that they're born with and we're just fanning that flame."

"Using that as a framework allows meaningful experiences and the students' deep relationship with the natural world to just kind of unfold," Hayes says of unstructured play. "We kind of curate their experience."

Hayes draws a distinction between forest school and conventional environmental education, which is structured on a set curriculum. At Cumming's forest school, the learning experience is more flexible and free-flowing, driven by the interests of the students.

The forest school's activities include creating fairy houses, making basket crafts, building friction fires, navigational activities, and interacting with trees and animals. "A lot of kids go home after school, and they go inside, or they get on the computer or they're home alone," Cannon-Crothers says. "So this is a great opportunity. We're out there building campfires and cross-country skiing, and playing awareness games."

"Beyond the environmental science qualities of the forest school, these kids are becoming more resilient," Hayes says. "They're becoming more curious, they're exploring more."

While students at the nature center's forest school do pay tuition — which goes in large part toward paying the professional instructors who specialize in teaching wildlife biology, primitive skills, and natural resource conservation — Cannon-Crothers is planning to implement scholarships. There are already flexible tuition payment plans available. 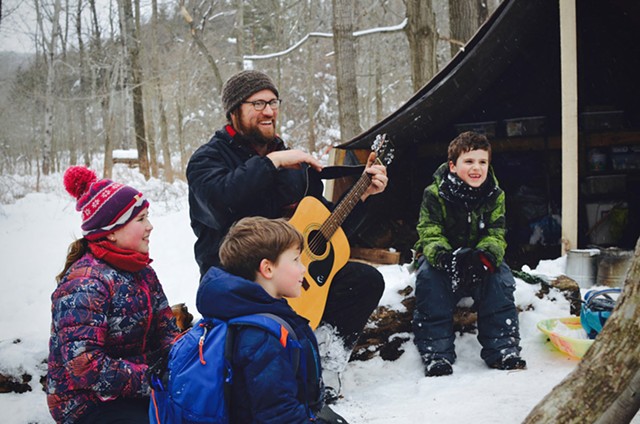 Hayes says the next step is to establish a program for ages 12 to 15. It, too, would foster a love of the outdoors and the development of practical skills and self-reliance, while also incorporating citizen science projects such as bird counts, stream studies, chemical tests, and plot studies. The hope is that a pilot version of this program will be in place by September.

At The Walden Project, the classroom consists of benches surrounding a campfire. Rather than learning a conventional school curriculum constructed with standardized test results in mind, students aren't expected to achieve a particular "desired outcome" that can be measured.

Webster says the focus is on "divergent thinking," rather than "convergent thinking," in which multiple possible answers are eliminated until one right answer remains. "Forest school and those kinds of programs, they foster divergent thinking and creativity and inquiry, in a way that is not easily measurable," he says.

"What are we doing to our kids if we're just sort of robbing them of the ability to have recess and play and get muddy?" he asks.

The Walden Project is a full-time experience. Monday through Wednesday, students are outdoors. A typical day begins with a walk into the woods, making a campfire, and a reading of Thoreau and subsequent discussion. The schedule also includes "dirt time" for solo interaction with nature, time for discussing current events, and afternoon workshops that focus on Thoreau-based themes such as social justice, environmentalism, creative writing, and economics.

On Thursdays, the students have a community meeting and work on independent research projects at Monroe Central Library. The research projects have ranged from building a canoe to constructing a hydrolysis machine powered by bicycle. Fridays are service learning days, in which Walden Project participants engage in internships, getting hands-on experience in such areas as organic farming and equine therapy.

"The way we phrase it is, Monday through Thursday, you learn about the problems of the world," Webster says, "and then Friday you are part of the solution."

Ten students are currently enrolled in The Walden Project; the program is equipped to serve a maximum of 20. Some students are homeschooled, and others are in a "gap year" between high school and college. The program is also accessible to those who have dropped out of high school altogether. One such student began studying mycology (mushroom science) at The Walden Project, and went on to receive a full-tuition scholarship to Sterling College in Vermont.

Tuition for the one-year program is $10,000, but financial aid has been an option since the beginning. Webster says more than half of the enrolled students are on scholarship, receiving as much as 100 percent in aid.

Ultimately, The Walden Project is meant to enable students to take the time to think about their personal identity and what their goals are for their lives after high school. Webster says that it's about inheriting Thoreau's legacy of being completely alive and connected to nature. waldenprojectny.com

If Naples is too far away to venture out and discover a forest school, there are additional options in the immediate Rochester area. The Amiko Learning Center, led by director Jennifer Green, offers its own forest school for six to 12 year-olds, in which Green and fellow guides Christina Das and Jamie Eggleston engage the students in science projects and developing survival skills, while also encouraging free play and autonomy. amikolearningcenter.org/enrollment

New this year, Penfield Recreation is offering its own forest school classes, facilitated by EarthWorks wilderness guides. For ages 5 through 8, there's "Nature Explorers," with its focus on introducing kids to nature. The "Running Wild" programs, for traditional students and homeschoolers alike (ages 6 to 11 and 6 to 14, respectively), center on learning survival skills. penfieldrec.org; earthworksinst.org/forestschool