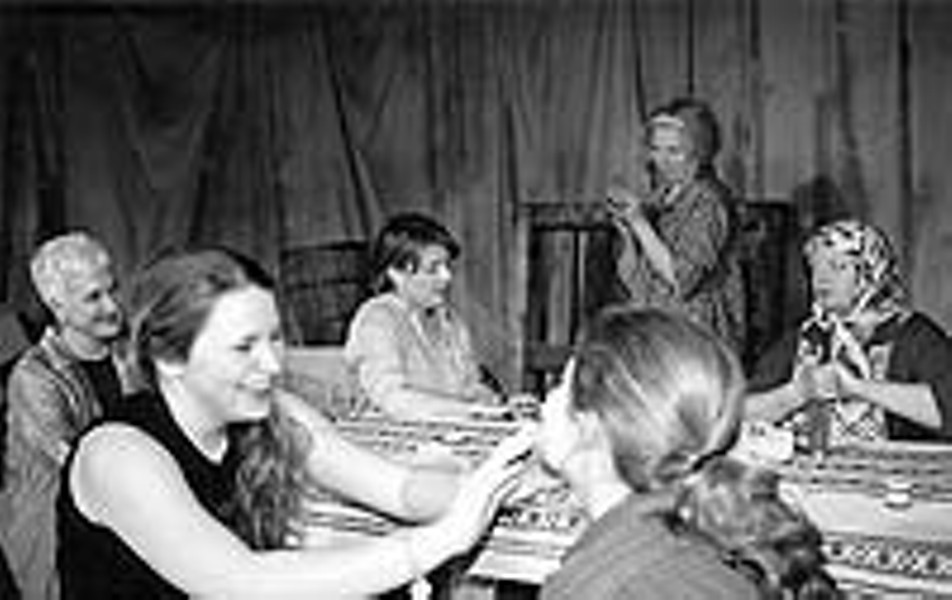 The cast of "Necessary Targets" in rehearsal.

Necessary Targets, the current production at Shipping Dock Theatre, is a play about two American counselors who travel to a Bosnian refugee camp with the purpose of helping women there talk about the war. As the American characters are forced to question whether they're really helping the refugees, the play becomes a cautionary tale for all Americans while we embark on the process of rebuilding Iraq.

Necessary Targets was written by Eve Ensler, author of the Vagina Monologues. In the play, the two American women --- Melissa, is a war-hopping trauma counselor, and J.S., an upscale psychiatrist --- approach the refugees the only way they know how: by sitting the women down in group sessions and trying to convince them to tell their war stories. Some of the refugees are willing to talk, others question and challenge the Americans' intentions. The Americans eventually have to decide whether they'll focus on simply gathering the women's stories or if they'll try to tackle the much more difficult and complicated fact that these women are too real, and too traumatized, to fix. Each American makes a different choice.

Shipping Dock founder and artistic director Barbara Biddy, who also directs this play, says she chose Necessary Targets to fill an open slot in the theater's season because she wanted to produce a play that would help people think about our country's actions in Iraq.

"It's a metaphor for American foreign policy," Biddy says of Targets. "We need to look at how we repair people, as well as things, in the aftermath of war."

The tension in the play rises when it becomes clear that Melissa, the trauma counselor, is collecting the refugee women's stories for a book she's writing. The enormous tape recorder she pushes into the refugees' faces symbolizes the voyeurism and threat of exploitation the refugees resent. The women start talking about other misguided efforts to help them they've been subjected to: reporters who come only to gather lurid stories, useless foreign aid packages full of tins of sardines and beauty products.

"You want to talk about war? What do you think we talk about all the time?" one woman asks. Zlata, a Bosnian pediatrician, says, "You Americans, you rush in. You don't ask what we need. We don't need talk. We need food, we need bridges."

Patricia Lewis plays Zlata, the character in the play with the strongest resentment of the Americans. Lewis thinks her character also raises questions that are uncomfortable for anyone trying to see the war in Iraq as a clear-cut conflict, or the rebuilding process in Iraq as easy.

"We want to simplify it, but it's far from simple," Lewis says. "We don't want to deal with the fact that not everyone is happy to see us and that some people are saying, 'Please leave us alone now.'"

Melissa's character --- part misguided doctor, part overzealous journalist --- most strongly dramatizes the further damage even well-meaning people can do when they oversimplify the messy, painful consequences of violence. (Biddy theorizes that Melissa is a characterization of Ensler herself, who based the play on interviews she conducted with Bosnian refugees.) But Kerry Young, who plays Melissa, says that the people who gather and tell the stories of war are crucial to our knowledge of war's effects.

"On the one hand, it does seem kind of invasive," Young says. "But on the other hand, I wouldn't know any of this if it weren't for people like Eve Ensler."

The refugees portrayed in the play don't experience much healing. Rather, Targets focuses on the transformations the American women go through, how they come to realize that the refugees are real, complicated human beings. This is another of the play's lessons for Americans today.

"Once you talk about the 'other,' that's when you cross the line," Lewis says. "When you think, 'Oh, they're Iraqis' or, 'They're Muslims,' it allows us to do all sorts of things we wouldn't do to people we know. I think any effort in Iraq that doesn't recognize what that culture is, is doomed to fail."

"What does concern me is the arrogance I hear from our leaders," she adds. "That arrogance frightens me --- that idea that we know what's best for everybody."

Young says the play's Bosnian characters, who come from different backgrounds and have different opinions about the war and how the Americans can help them, caution us against lumping all Iraqis into one category.

"The truly revealing thing about the play is that these people had lives just like us," Young says. "They're not just somebody to be gathered up, patted on the head, and told, 'Go back to the house we're building for you.' It's not that simple."

Young mentions a scene in the play in which the Bosnian women criticize the way the foreign press repeatedly photograph the one woman among them wearing a scarf on her head. "It is appealing to us to take a picture of this ethnic-looking person," Young says. "It's exotic. But there are tons of people walking around that look just like us."

The Bosnian women in Necessary Targets do have hope. In the midst of the squalor and oppressive boredom of the refugee camp, the women get drunk, sing, talk about sex, and laugh. In the end, J.S. forms a compassionate connection with the women and is changed for the better by the relationship. Biddy hopes audiences leave with a similar sense of hope.

"If you want people to affect change, you don't leave them in a depressed state," Biddy says. "There are things we can do, finding other ways to deal with things besides war."

Young, however, isn't so sure. "As far as a look at humanity," she says of the play. "I don't see as much hopefulness there."