The uncertain fate of live arts and entertainment in Rochester

The Spring Chickens had a gig last week. It was the first live-music performance I’d attended since mid-March.

That’s quite a stretch of home quarantine for someone who is usually out three or four or five evenings a week. Maybe attending shows, or eating dinner at a restaurant or a friend’s house, or wandering over to a neighbor’s house with my dog. I’ve also been working almost exclusively from home during the coronavirus pandemic. There have been a couple of trips to Cleveland to visit my 90-year-old mother at her assisted-living apartment; visitors aren’t allowed in the building, so an employee brings Mom outside to a table, where we sit six feet from her. She asks about the weather, if I’ve talked to my brother, and how the car’s running. That used to be Dad’s job, ask how the car is running.

I avoid Wegmans crowds, and shop at small places such as Herrema’s Food Market, near where I live in Charlotte. I wave at my neighbors, maybe shout something amusing at them. Something I consider amusing anyway. Social gatherings have recently been happening, but are usually limited to just another couple. At first we warily approach each other in our masks, like members of a secret society gathering on the deck behind our house. Then we settle in on chairs that are approximately six feet distanced and begin reassuring each other about how cautious we’ve been.

Erica Fee is serious as well. As president of the KeyBank Rochester Fringe Festival, there’s a lot riding on her interpretations of the oft-convoluted parsing of coronavirus language.

The Rochester Fringe, now one of the most-attended festivals of its kind, goes virtual, September 15 through 24. But unlike the past eight events, the shadows of giant inflatable sea creatures will not cast their shadows on the streets of downtown Rochester in front of 10,000 people eating French fries. You will see it all – musicians, comedians, dancers, drag queens – from the comfort of your living room.

It’s lucky to have gotten this far. The summer of 2020 has not been easy on the arts.

To a large degree, that’s true. But there have been arts to a smaller degree.

Thursday’s show with The Spring Chickens looked like a safe bet for my cautious coming-out party. It would be in the parking lot at The Little Café, between the art-deco treasure of The Little Theatre No. 1 and its contemporary relatives, Nos. 2, 3, 4 and 5. Outdoors is one of the prime elements of safety in this time of coronavirus pandemic. I’ve been a little bit of a regular the last few years at The Little Café, so I’m comfortable with that crowd. The tables, about 20 of them, would be set up more than six feet from each other. And the three Spring Chickens themselves are friends of mine — Scott Regan, Connie Deming and Steve Piper.

They would not dare to do me harm.

Their performance is an incidental one. As far as the state is concerned, the main reason people have gathered in this parking lot is to order black bean burgers and chardonnay from The Little Café.

The bright sun was sinking behind the apartment buildings across the street as The Spring Chickens settled into their chairs on the small stage set up in the parking lot. “It’s great to have the opportunity to go out and do something semi-routine again,” Regan said.

Routine. Our evening routine has been disrupted this year. A couple of songs into the show, Margaret and I realized that, in dog-proofing the house before leaving, we’d forgotten about the garbage can beneath the kitchen sink. Abbie is a wonderful dog. But she’s also a 90-pound Weimaraner that will pluck an unattended loaf of bread off the countertop. And she knows how to open cabinet doors. There will be consequences in our forgetting to take out the trash.

I have not eaten at a restaurant since March. But maybe once a week, we’ll order take-out from one of our favorite small, independent businesses. I fear that when COVID-19 passes (although I suspect there will be COVID-21 and COVID-23) many of the city’s excellent restaurants will have succumbed to the harsh economy. And all that’s left is Olive Garden. So I’ve done curbside pickup. And I’ve stepped inside restaurants for the pick-up. Inside, where people are eating. No masks, of course, they make for clumsy table manners. Those tables do not look six feet apart. I worry about studies of such confined spaces that suggest the distribution of COVID-19 droplets is enhanced by the air flow from air conditioning.

Gazing out at the widely spaced tables in front of The Spring Chickens, Deming holds her hand up to her forehead, shielding her eyes from the sun. The Spring Chickens are defined as much by the group’s harmony-driven songs as it is for the trio’s eclectic, between-song chatter. Regan starts ruminating on the landscape at Cobb’s Hill Reservoir, leading to a brief mention of the iconic landscaper Frederick Law Olmsted. The guy who designed New York City’s Central Park. And Genesee Valley Park.

You don’t get that kind of illuminated chatter at a Kiss concert. Those big-ticket concerts are over for the year. And perhaps next year as well. That’s the quiet chatter among so many people in the concert industry. Where we’re at six months from now is unpredictable. How do you mount a tour when so many states have a different idea as to what’s safe, and what isn’t? And the situation changes from week to week? What European band will risk coming to the United States and its shores awash with COVID-19?

Piper is known for between-song jokes and groan-inducing puns.

The experts in controlling the spread of viral diseases seem to agree that New York state has done well in bringing down the numbers of COVID-19 infections and deaths. Florida? Ehhh… not so much. But we’re a squirrel walking on a telephone wire, we don’t need an ill wind.

And now that we’re getting down to the argument of what businesses can open, and which ones can’t, the disputes ensue. Restaurants are OK, but they can’t have music, unless it’s “incidental.” What kind of music is “incidental?” And the music can’t be advertised. Museums are OK, bowling lanes are OK, theaters are not. Some clubs are enforcing social distancing, but others push the rules to the edge, then step over the line. This past week on social media, musicians have been complaining about venues whose flaunting of the guidelines is drawing the ire of New York state.

Why the seeming inconsistencies, and the uncertainties about what’s allowed and what’s not allowed?

Outside, as the shade from the surrounding buildings slides across The Little parking lot, Deming does her wonderful song saluting four admirable women: Rosa Parks, Eleanor Roosevelt, Helen Keller, and Maya Angelou. Just a woman with a beautiful voice, and two guys with acoustic guitars.

Our summer window in Rochester is closing on such moments. Once forced indoors, how will we react?

“We know that singing indoors is very dangerous, and we should just state that clearly; other countries have,” Fee says. “We should say no singing indoors, no brass instruments indoors, no woodwinds indoors. You know, done. Instead, we’ve decided to classify different types of music, which is terribly confusing to people.”

Is a concert venue no more about killer tubas than the beach is about killer sharks? Perhaps. But the circumstances, and the surroundings, certainly seem to increase your chance of getting bit.

“I had wished and hoped, at this point, that the state of New York would have allowed some outdoor performances, as long as attendees are in compliance with all the social distancing regulations,” Fee says.

“Unfortunately, that hasn’t occurred, and that is a little depressing really. Because I do think that those outdoor performing arts would have given people a little bit of resolve to push through what is going to be a very dark and difficult late autumn and winter. With, no doubt, rising COVID cases and flu.” 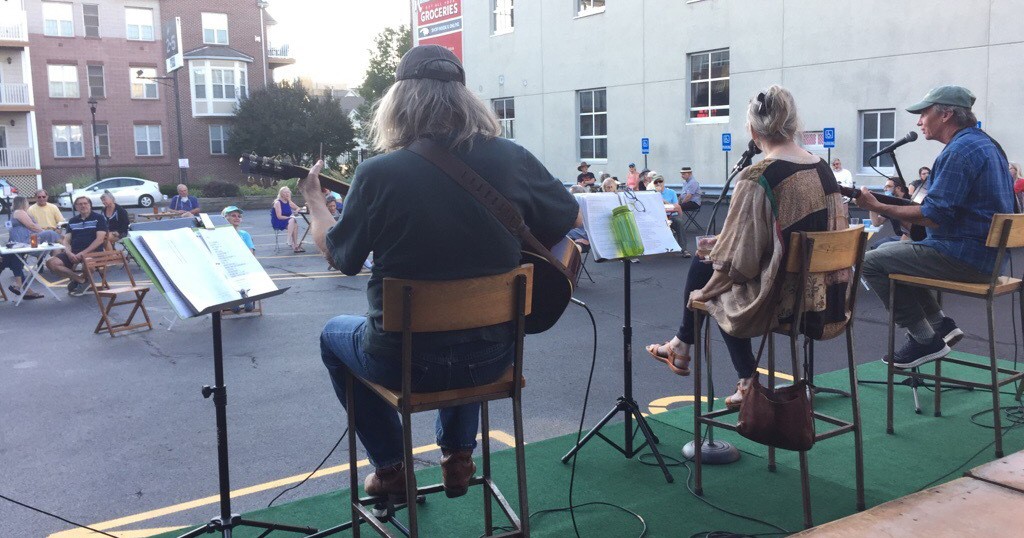 Inevitably, our circumstances demand accountability. Without anger – it’s more like resignation – Regan directs his next song to Trump. “It gives you more than you’ll ever bring,” he sings, “the world doesn’t owe you a thing.”

Another regular at The Little Café, Karen, passes around the tip bucket. It’s good karma, especially these days. Tip your bartenders, waiters and waitresses. And your musicians.

We’re not picking favorites – we all have to eat – but as Fee and many others have pointed out, the arts and entertainment biz is actually a bigger economic driver than agriculture.

“First of all, as a community, we can’t hang our hats on being an arts community when this is all over if we provide no relief,” Fee says. “But furthermore, this country will be poorer for it. And it’s very difficult for us, especially as a festival, but also as performing artists, to even have conversations with other festivals in other countries, or with performing arts festivals in other countries, because they are all getting economic relief from their governments.”

As the sun continues to go down, Deming brings down the house with her cover of Roy Orbison’s “Only the Lonely.” On this version, she always holds that note near the end, loooooong and siren-like, a show stopper that would have even Orbison howling with approval.

The show is over. We drive home. Where inexplicably, and to our astonishment, Abbie has not gotten into the garbage.

“Good girl! You get a biscuit!”