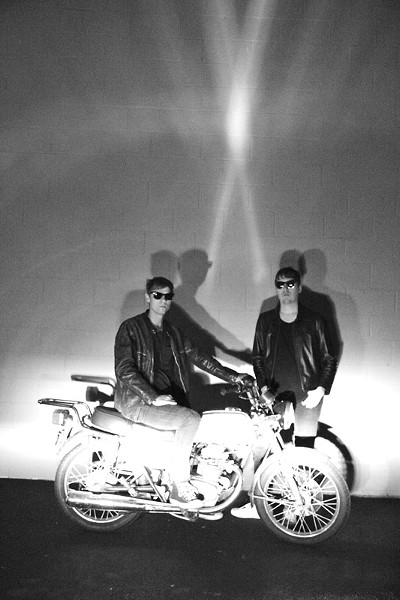 Buffalo Sex Change is a sonic tantrum, a Rochester-based twosome that seeks the under-played, under-heard notes and riffs and re-works them into a garage-rock frenzy. The guitar-and-drums duo's minimal approach leaves room for maximum energy in the space it leaves open. This is pure, unadulterated, chaotic rock n roll.

Emerging from the ashes of Brooklyn's Crawl Babies, guitarist Phil Pierce and drummer Clayton Eddy reconvened in the Flower City in 2013 to form Buffalo Sex Change. Soon after, the band's eponymous Dadstache Records LP was here, full of a reverberating, atmospheric throb akin to the Jesus and Mary Chain or BRMC with the sexified swagger of The Cramps. The band is loose in such a way that doesn't come off the least bit sloppy – sleazy, but not sloppy. There's space in there to let the music really flex and do its thing. To Pierce and Eddy, rock 'n roll is more about the energy, after all, along with a dreamy soundscape and occasional turns to chaos. Too much rehearsed precision and perfection can ruin this, and Buffalo Sex Change knows it.

Pierce and Eddy strolled into City offices for a sit-down to discuss the two-piece advantage and how they leave room for noise and chaos. An edited transcript follows.

CITY: Was the plan always to be a duo?

PIERCE: We moved back to Rochester and tried to figure what to do with just the two of us. We recorded a lot and tried different stuff, and what we wound up with was the two-piece where we played off of each other. Because we had played together so much, it felt the most natural as opposed to having programmed stuff. It just felt right.

PIERCE: It also helps with the writing side of it, because there are certain things you can't do, or you have an idea that isn't working. You can weed out stuff more quickly.

When you add studio embellishments, do you introduce them live as well?

PIERCE: In the recordings we do have some extra stuff, but we have it low in the mix. It is pretty minimal. When we're playing together – working out songs together, or playing live, it's worked out just as a two-piece.

Were there any kinks to get out, demons to exorcise?

PIERCE: We first played at Skylark, and it was a little loud. I had two amps. We really didn't know how to pull it off yet. I was discouraged. I didn't know if it was working. Then we played in Brooklyn a week or two later and it worked.

EDDY: We got lot of positive response, especially from the name.

PIERCE: We wanted something that people would remember. It was funny to us.

What's your approach in the studio?

PIERCE: We always do the drums and guitar at the same time.

EDDY: That way it has a more live feel. So if we speed up, we speed up together. It's not to a click track, which may make it difficult if we want to add more onto it later.

How do you write?

PIERCE: Sometimes we write separate and see if it works together, give each other suggestions. We're pretty open with one another.

EDDY: We've been playing music together for eight years now. We're still learning all the time, but we work well together.

Are your songs loose enough to improvise or jam on stage?

PIERCE: We usually do them how they're written, but sometimes they change a little bit.

Eddy: Some songs will have a freak-out or a noisy part, and that can last a minute if we wanted it to. There is some variation, but it's not really jammy.

How important is the noise and chaos in your sound?

How is the next record going to be the same or different?

EDDY: I feel the first record is darker than the stuff we're doing now – darker chords and stuff.

PIERCE: Clayton is writing more now, so there's more of his influence on this record. And I think we know a little bit more of what we can do. I want it to be a rockin' record, pretty upbeat. I've been listening to a lot of early rock 'n roll lately for the energy – People like Jerry Lee Lewis, Little Richard – and trying to absorb that energy.