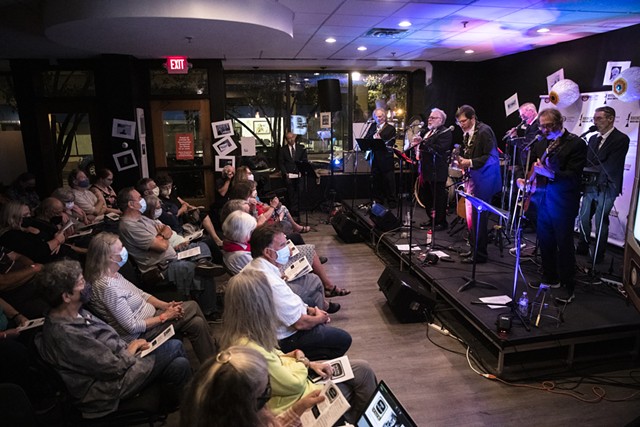 The room at the Rochester Music Hall of Fame and Museum on Gibbs Street was packed. Fifty-five or so people, most of whom were likely familiar with what Watkins & the Rapiers would be delivering Wednesday night at the KeyBank Rochester Fringe Festival. Whimsy, irreverence and cleverness.

The show was “Singing Serling: An Evening of Songs Inspired by Specific Episodes of ‘The Twilight Zone.’” Fourteen songs, each inspired by one of the show’s science-fiction tales.

Watkins & the Rapiers is a bit like The Eagles: Too many songwriters. Six, in fact. Yet while the band plays with a wink and a knowing nod, the songwriters all have their distinctive notes.

The trouble starts with brothers Scott and Kerry Regan; Scott is the host of the WRUR-FM (88.5) morning music show “Open Tunings.” Then there’s trombonist and keyboard player Rick McRae. Guitarists Steve Piper and Tom Whitmore, who swaps bass and guitar between songs with Kerry Regan. Reed player Pete Hasler. And while drummer Marty York doesn’t write songs, he is to Watkins what the late Charlie Watts was to The Rolling Stones: a steady sanity.

The band, perhaps best known for its frequent gigs at The Little Café, dresses up for special occasions. On this night, it was dark suits. With images from the relevant “Twilight Zone” episodes taped to the walls. An emcee, Ted Baum. And a video screen flashing “Twilight Zone” trivia.

Opening with the TV show’s familiar and ominous theme — “There’s a signpost up ahead!” — Watkins & the Rapiers operates in its own Twilight Zone of comedy.

The show-opening “Twilight Zone” episode serving as inspiration was the classic “To Serve Man,” and its seemingly benevolent aliens arriving on Earth with a book that seems an instruction manual on “How to Serve Man.” The typical Serling zinger is, the book is actually a cookbook. And Piper’s accompanying song had his typical humor: “Why, you’d be perfect at our barbecue, don’t work yourself into a stew.”

Some of Watkins’ songs stayed close to the source material. “The After Hours” tells of a woman who becomes a store mannequin. “Where is Everybody?” is about humanity caught in an experiment on social deprivation.

The episode “Static” is a typical Serling trope, with an element of time travel: An elderly man’s radio is broadcasting old Tommy Dorsey music, which transports him back to his old girlfriend, to when they were young. Watkins made this one work with its big-band arrangement.

The music tells the story again with the bucolic opening and seemingly happy family in “The Bewitching Pool.” “But behind that façade their happiness is a fraud,” Kerry Regan sings, as two children flee their divorcing parents in a magical way. And the band throws in a nice movie fanfare at the end of “The 16-Millimeter Shrine.” Like “Static,” that story plays with time as well.

“The Twilight Zone” often asked its viewers: What is real? In “Mirror Image,” a woman believes she’s seeing her double. “They all act like I’m losing it,” Hasler sings, “and in fact they might be right.”

Similarly, themes of madness and detachment from reality are in “Nightmare at 20,000 Feet.” It famously starred a young William Shatner as a passenger on a jetliner who watches out the window as a gremlin on the wing is tearing apart one of the engines. When the plane lands, Shatner is hauled away on a gurney, assumed to be delusional, before airport personnel discover the engine has indeed been mysteriously damaged. “Here’s to the ones who know what is real,” Piper sings.

It was Scott Regan’s two songs that departed most from the specific episodes that he chose. In “Mr. Denton on Doomsday,” he takes the story of a Wild West gunslinger, and adds what seems to be the man putting himself in the position of getting shot because of his remorse over killing a 16-year-old kid.

Regan is even less indebted to Serling in “Time Enough to Last.” It’s one of the most-famous episodes of “The Twilight Zone,” the story of a bookworm bank teller played by Burgess Meredith, who retreats into the bank vault on his lunch break for some undisturbed time to read. An explosion shakes the vault, and Meredith’s character emerges to find the city has been destroyed by a hydrogen bomb. Only he is left. Time enough to read! Of course, in typical Serling irony, Meredith stumbles on the steps of the shattered library, and breaks his eyeglasses.

In Regan’s hands, “Time Enough to Last” is only a title that launches the story of a relationship, and “time slipping away.”

For Piper, a train passenger longs for peace, and finds it in a town called “Willoughby.” Except — and here’s the time-travel thing again — it’s the Willoughby of 1888, and to get there he’s jumped from the train to his death. “One for The Angels” is a noble deal with the devil, “Perchance to Dream” is the story of a man who’s afraid to fall asleep, lest he die. Spoiler alert: he’s found dead on his couch. 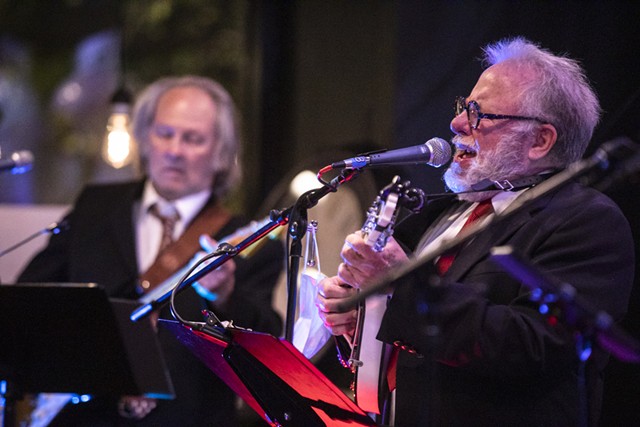 So death is a big theme here, alongside the strong Western New York connection to Serling’s story. A Syracuse native, he grew up in Binghamton. After suffering two heart attacks, the 50-year-old Serling died at Rochester’s Strong Memorial Hospital in 1975 while undergoing bypass surgery, and is buried in Lake View Cemetery in Interlaken.

The complete festival schedule is available at rochesterfringe.com. Go to “Find a Show,” create a list of events by date, venue and genres, then hit the “Filter” button. Tickets to each event are available at the web site, by calling (585) 957-9837, or at the venue one hour before the start of the show if they are still available.

Jeff Spevak is WXXI’s Arts & Life editor and reporter. He can be reached at jspevak@wxxi.org. Feedback on this article can be directed to dkushner@rochester-citynews.com.