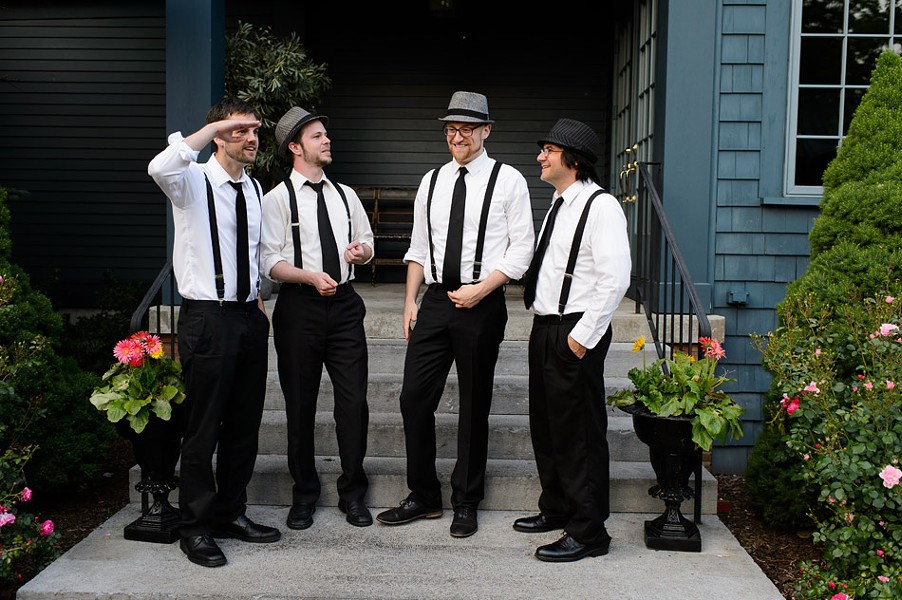 FANTASY: It was early one enchanted evening not too long ago, as I rolled the Caddy up to the razzle and dazzle of the supper club. I got out, straightened my tie, shot my cuffs, and tossed the keys to the valet. I ankled over to the door where music from the swingin' band on stage assailed as the doorman pulled back the velvet rope, greeting me warmly by name. Inside was a slick affair; cats in hats and pretty kitties lined the bar with their chosen poisons and assorted arm charms. The waitresses were ample samples of divine pulchritude; even the ugly ones were gorgeous. The Swooners were onstage giving it all a sweet, swinging, subtle soundtrack.

REALITY: It was ass-chapping cold as I drove the van out to Bistro 135 in East Rochester. I got salt on my pants after wiping out on the sidewalk and I accidentally zipped my beard into my jacket. I walked into the joint as it bristled with several dozen conversations from the smart set. I'll stick to the first paragraph's description of the wait staff; they were beautiful...and so was the music.

The Swooners were perched on the balcony overlooking the serene scene at Bistro 135, giving it a palpable ebb and flow. Singer Mark Bader intoned nonchalantly with Harry Connick, Jr.-esque phrasing as he contributed to the beat via the cajon he straddled (the band is joined by drummer Paul Mastriani on its bigger gigs). Willy O'Riley tickled the ivories, creating notes that cascaded like rain. And Chris Potter's guitar slinked and hummed throughout. It was the perfect band for whichever introduction to this article you prefer.

The Swooners have been playing it cocktail cool since November 2011. It happened like this: The Moho Collective's guitarist Kurt Johnson had a monthly solo gig at Bistro 135. Management suggested he flesh it out a bit and put a band together. That's when pianist O'Riley and vocalist-percussionist-bassist Bader got the call.

"We got together that day," says O'Riley. "Before the show and ran a couple tunes. Then we came here and did a three-hour gig."

That three-hour gig was punctuated with charted material as well as standards they all knew. "We had charts," Bader says. "I had performed jazz stuff before, back in high school. So I had a few standards up my sleeve."

But he didn't have a name for the trio up his sleeve. When a young fan inquired, they scrambled and came up with The Swooners on the spot.

Johnson recorded one of the band's live sets as a demo, resulting in the band securing gigs at jazzy joints like The Lodge @ Woodcliff, Pomodoro, The Strathallan, Pane Vino, as well as Bistro 135. Soon the band was everywhere.

While Johnson was on tour with Moho Collective, The Swooners had guitarist Chris Potter sub in. Things went so well that when Johnson returned, O'Riley and Bader chose to keep Potter. It was an obvious and amicable decision.

"There were no hard feelings," Bader says. "Kurt couldn't play all the dates because of his Moho commitments."

The Swooners pressed on as a jazz trio with a dash of pop accessibility and fun. That pop toned down a bit of the cerebral leanings indicative of some jazz — some jazz that may confound the casual listener. But at the same time the trio didn't want to alienate the jazzers.

"If you're talking about strict jazz fans," O'Riley says, "I think we've struggled sometimes with whether or not we're authentic enough for them. I think the reason we've gotten booked as much as we have is because we add a new element to it with the singing."

Bader agrees. "The harmonies especially," he says. "And we do some jazz versions of non-jazz songs."

"We do standards because they're common ground for us," Potter says. "But we use them to launch into other things." Other things that Bader, the primary songwriter, doesn't necessarily see as jazz at all, including cuts on the band's new CD, "Old'sCool."

"I would say it's 100 percent pop songwriting," Bader says. "The sound is reminiscent of jazz, there's some swing... When I say pop, I mean it's accessible, simple to a degree, and there's a definite form."

"It's vintage pop," says O'Riley. "It's pop, but pop from different eras. Obviously our whole shtick is playing vintage and old school styles...there's something about time that ages music, that makes it more acceptable and more cool."

But there's no second guessing the audience. When the band plays live, sometimes The Swooners' sound is ignored or dismissed as atmosphere, other times it's a party.

"We do play a lot of gigs around town where we're wallpaper," says Bader. "It feels really good to play for a crowd that's attentive." Like when the band got hired to play the University of Rochester senior ball.

"We figured, 'OK, college kids, we gotta play some party music,'" says O'Riley. "We tried a few modern things and they weren't really responding. Then we busted out all our swing songs and all of a sudden it was a humungous dance party."

"I think that's the first time we thought we'd run out of swing tunes," Potter says.

What is truly remarkable about this band is its casual elegance, its sub-strata effervescence. These cats play hot music, and do so Popsicle cool — you could even say jazzsicle cool. This just adds to the band's universal appeal. It's for everyone, even the kids.

"I'm of the philosophy that music should be clean," says Bader. "PG to the sense that a kid won't hear anything dirty, but an adult may be able to read into. I totally believe in double entendre."