The stuff of Rochester

A look at local memorabilia, past and present

There is no shortage of affection for Rochester. Despite the heartbreaks this city has endured — lost landmarks, miscarried projects, fallen corporate keystones — hope is still the holdout. Relics remain and invoke certain nostalgia for our storied past. But more than that, Rochester souvenirs and their many collectors bespeak a belief in this city's future. 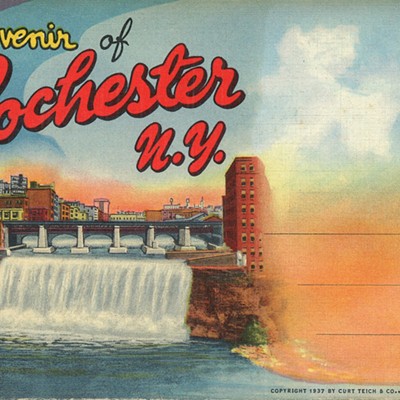 Take the Rochester Subway...please! More than a half-century has passed since the last commuter ride in 1956, but the lore surrounding it — and the conversation surrounding Rochester transit — persists. For those among us who never knew life before I-490, check out the running HO-gauge scale model of Rochester's now-defunct subway line at the New York Museum of Transportation in Rush (6393 East River Road, nymtmuseum.org). There you can see the 1956 farewell film, "The Steel Wheel," which takes you on a ride of the line end-to-end. All things transportation await, but one local enthusiast has followed his interest down an abandoned track toward a scenario for the future, with cool stuff to boot.

Perhaps you too have made a double-take upon viewing the perfectly modern Rochester Subway poster, a vision of routes based on former transit lines to accommodate the city's current needs. Originator Mike Governale and his blog, rochestersubway.com, are gaining momentum in local preservation and forward-thinking circuits.

"We've seen so many beautiful buildings in Rochester turned into parking lots," Governale says. "That really drives me to talk about land use and transportation." A resulting project is Reconnect Rochester (reconnectrochester.org), a non-profit network of community members working to integrate better urban design, safer streets, and alternate modes of regional transit. Keep an eye out for Roc Transit Day in June.

Governale's posters and vintage artifacts are available through his website, while his own collection of Rochester memorabilia includes an original hand-painted destination roll from the front of a Rochester subway car, original subway tokens, colorful well-preserved rail transit tickets, piles of vintage Rochester postcards, and a truly unusual pink plastic replica of Midtown Plaza's Clock of Nations, an authentic product of a Mold-a-Rama vending machine.

The actual Clock of Nations, once the physical center of America's first indoor shopping mall (which existed right here in Rochester, until it closed in 2008), now sits at the Greater Rochester International Airport. Louis Perticone — also considered a contemporary local visionary — hopes to give this treasured piece of local memorabilia a permanent home in the palace he founded of all things Rochester, ARTISANworks (565 Blossom Road, Suite L; artisanworks.net). Floor-to-ceiling displays dedicated to art, photography, history — and everything else — cannot be described, only experienced. Among these is an impressive collection of pieces by late local painter Ramon Santiago, who, we find, had remarkable ties to another beloved local institution here in his hometown.

The famous Donuts Delite at the corner of Culver Road and Empire Boulevard (touted in a 1961 issue of Greater Rochester Commerce as "a glamorous donut shop") was where Santiago dreamed out loud of becoming an artist, all while making the donuts. This is just one of the sideline stories that comprise the history of this city, valued with such care by Delite family descendant Jim Malley, himself a Rochester history enthusiast and collector (he is the former owner of late, lamented Mercury Posters). Malley's pace is frenetic as he shows bits of his collection: original 1912 sheet music to "Rochester is a Grand Old City," rare photographs of blues legend Son House when he lived in Rochester, scores of gorgeous vintage postcards, and adverts that include Sibley's, Midtown, and Genesee Beer (before it was a retro, hip beverage).

Certain artifacts are testaments to lesser-known greatness in Rochester, of which little actually remains. Evidence is paradoxically preserved by ephemera: a 1951 calendar memorializes the stunning gothic Kimball Tobacco Factory — the largest local employer of its day and original site of the Mercury statue (now atop the Aqueduct Building at 50 Broad Street) — before the factory buildings were leveled to make way for Veterans Memorial Auditorium, now the Blue Cross Arena. Similarly, a book showcasing paintings by Rochester artist Batiste Madalena reveals the singular silent-era glamour of his stylized original movie posters, all commissioned by George Eastman for display at Rochester's distinguished movie house, the Eastman Theatre.

"George Eastman had that great vision," Malley reflects. "Madalena was another brilliant, brilliant guy who lived among us."

What about now? Who are the geniuses living among us today? Eric Kunsman contemplates that question as he rests his hand on an early Kodak digital camera at his printmaking shop and gallery, Booksmart Studio (250 N. Goodman St., booksmartstudio.com). Kunsman teaches photography and digital printing at the Rochester Institute of Technology's National Technical Institute for the Deaf, maintaining an impressive, expanding collection of Kodak memorabilia.

His display is visually striking just for the signature gold and red. Cameras from every era line the shelves, from early paper pinholes to Brownies to 1980's Disk cameras to early digitals. Darkroom evolution is traced through candle-driven safelights, various types of paper, and intriguing bottles of developing chemicals. The pop-culture aspect is almost explosive, with commemorative pins from the Olympics, coolers, mugs, towels, golf balls, pinwheels, tops, kazoos, a miniature truck and race cars — even a figure of Kodak-sponsored NASCAR driver, Sterling Marlin. Kunsman also holds the original smoking permit for Kodak headquarters.

Looking at the early digitals, Kunsman voices his hopes to meet the people and hear the stories behind the innovations that shaped his career. "Without Kodak, we wouldn't be here," he says. "It's our heritage."

Still, Rochester keeps moving. Locals devote fondness for this city with a gaining force of "Rochester pride." Indie craft fairs such as Mayday Underground (http://maydayunderground.wordpress.com), the Yards Sale (attheyards.com), and Hearts & Crafts (facebook.com/heartsandcraftsindiemarket) feature edgy Rochester flair. These are places where you can acquire all sorts of Rochester-inspired stickers and jewelry, current and past issues of local zine Rochester Teen Set Outsider, and items that honor the stunning number of crows roosting in our city limits.

And one more thing: keep an eye out this city's biggest fan, Ron Chester. He'll tell you straight up, "Rochester is the Best."

What are some of your most treasured Rochester souvenirs? Share your favorites by commenting on this article, below.