The spice life at Szechuan Opera

My favorite thing to do in a big city is to find hidden gems. In New York City, I would walk through Midtown, about three blocks away from the main tourist traps and get lost in the real bustle of the city while looking for a place to eat. Then I'd find the unassuming entrance to what I think is a little bistro, only to open the door and enter a completely different, luxurious realm of food and drink. It would feel like I escaped the city through a wardrobe to a quiet new dimension. We have that now in Rochester, on Park Avenue. What was Cobbs Hill Pizza and Bistro Six30 is now Szechuan Opera.

It is visually a complete departure from the previous residents of the space. A rock fountain greets you in the vestibule, and a large stone bar stocked with wine and beer are directly to the right. Above the wine and glass racks are twelve statues that each represent an animal of the Chinese zodiac. There are classic Chinese art pieces and actual Szechuan opera masks hanging on the walls. Just past an ornate wood walkway is the dining room, with a cushy, long bench opposite a line of tables, and large U-shaped booths to the left that look like something from out of a scene from a drama I'd catch on the Independent Film Channel.

And how did they make the space seem so much larger? If "My Dinner with Andre" was to have a sequel, this would be the place to film it. At the very least, the new space is large but intimate enough that I predict that Szechuan Opera will be the willing host to many marriage proposals.

According to manager Peter Au, remodeling the space took nearly a year. All materials, artwork, furniture, and dishware were imported directly from China. This is why it looks like I entered a different world; I kind of did. Szechuan Opera has only been open for about a month, and customers steadily streamed in as I spoke with Au.

Szechuan Opera is not a traditional American Chinese restaurant. The food that we call Chinese in the States is not authentic Chinese food, but a marriage of some traditional dishes and American styles. This is partially because of Americans' wariness of foreign flavors, and partially the availability of some ingredients: bean curd (tofu) and native Asian peppers were just not readily available in the States in the late 19th century. 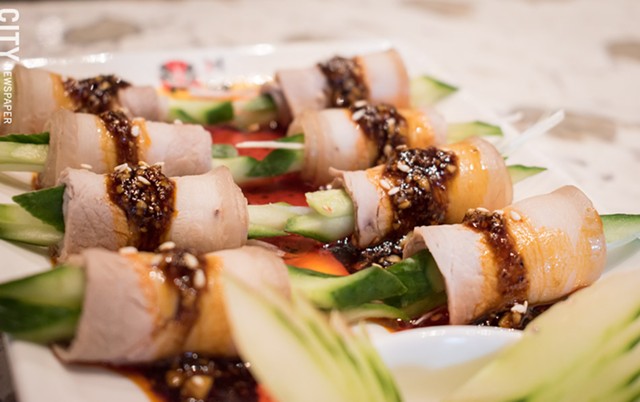 Au explained that the chefs at Szechuan Opera patterned the menu after cuisine from China's Sichuan province (which partially inspired the restaurant's name). You can still get the Chinese food that most Americans are accustomed to, such as Lo Mein, scallion pancakes, and egg rolls. But if you feel a bit more adventurous, Szechuan Opera offers a menu of more traditional dishes. They tend to be spicy, but don't let that deter you; the food is not spicy simply for the sake of being almost unbearable, Au explained. It is still bold with flavor, and the spice enhances the flavor.

I ordered the spicy bean curd with fish fillet dish ($18.95) from the Classic Szechuan menu. It's a stew that comes in a large bowl filled with huge chunks of fried fish and cubes of bean curd, speckled with red peppers and vegetables, all swimming in a thick broth. As much as I wanted to eat the whole thing, it was such a large dish that I had to take some home. Thankfully, I discovered that it is just as good the next morning, especially after my leftover rice soaked up most of the remaining broth.

I also ordered the Chengdu-style mung bean noodle appetizer ($5.95) and Dan Dan noodle dish ($7.95), both on the refreshing cold appetizer menu. Those were a nice counter to the richness of the fish; the Dan Dan noodles were mildly spicy, with a mix of chili oil, peppers, and vegetables. And the mung bean noodles were completely new to me; I'd not had them before my visit to Szechuan Opera. They are thick, short noodles made from mung bean starch, they absorb the oil and spices they're cooked in, and the flavor explodes as it hits your tongue.