And once the grumbling started, it became clear that many customers believe that they are going to pay more a month for less-than-stellar Internet connections.

"Other people around the world do not pay close to what we pay for Internet service," says Phillip Dampier, a local cable and broadband watchdog. "We're among the most costly places on earth to buy Internet service. It is cheaper and faster overseas, and not usage capped."

Time Warner spokesperson Joli Plucknette-Farmen says that the company bumped up the speeds of some of its cable Internet plans last year. And she says that the rate increase is necessary to pay for infrastructure upgrades that allow the company to meet consumers growing data needs, including faster speeds.

"It's really about us providing the most reliable Internet services possible," she says.

But the increase and accompanying complaints point to a serious issue that isn't unique to Rochester. Consumers in communities across the country have few choices for home broadband providers. Some critics say that most communities are stuck with a duopoly, and that the lack of competition has resulted in incremental speed increases with disproportional pricing.

Time Warner is not Rochester's sole high-speed Internet provider, but it has the vast majority of broadband subscribers. Frontier, with its phone line-based DSL service, pulls in most of the remaining subscribers.

Critics say they are frustrated because they see Time Warner offering higher speeds in Kansas City and Austin, markets where Google is building extremely fast fiber optic cable networks. Though in both Google's and Time Warner's offerings, the higher speeds also come with prices in the $75 to $80 per month range. And Time Warner's speeds still don't match fiber's speeds.

Time Warner's most popular broadband plan in the Rochester region is its middle-speed package, which costs $35 a month on a one-year introductory basis.

Increasingly, speed does matter as consumers keep finding more uses for their home broadband networks. No longer do households simply have a single computer hardwired to a high-speed modem. People are streaming high-quality digital video to large televisions; for several years, streaming digital video from services like Netflix or Hulu has been the largest driver of growing household data consumption. Plucknette-Farmen says online video gaming is also driving a lot of the data consumption on Time Warner's networks.

And consumers are also downloading and streaming music. They're connecting smartphones, tablets, and videogame consoles to home Wi-Fi systems. Or they back up their computers using cloud-based services. And different members of a household are often doing several of these things simultaneously.

Other trends, such as the growth in telecommuting, could add stress to broadband networks, locally and nationally.

Ultimately, the more data that broadband connections can provide, the better consumers' devices or streaming services will function.

"I think with technology, there's always going to be a need for more and more bandwidth," Plucknette-Farmen says.

Alternatives to the broadband duopoly are few, but they do exist.

Some communities, dissatisfied with the options or services available to them, have built their own networks, though the arrangements and technology vary. Some communities have formed cooperatives to build better networks. In other cases, local governments have stepped up. And in many cases, the entity in charge strives to build a fiber optic network, since that technology is seen as the best bet for meeting growing data needs.

The city of Mt. Vernon, Washington, built an open-access fiber optic network backbone. Materials on the city's website pitch the network as an economic development tool and say that the city's policy is to let as many service providers as tap into it as possible. They say it could be used for broadband Internet services, voice or video services, and even medical imaging.

But the community broadband concept isn't without flaws, and in at least one case it's led to financial problems for a community. Some states have also passed laws prohibiting community owned broadband networks. Elected officials often justify the laws by saying that the networks compete unfairly with private providers. (The Institute for Local Self-Reliance, which generally supports community-owned broadband, says that New York is not a state with legal barriers to the approach.)

Other communities have tried to attract large companies, such as Verizon and its FiOS offering, though the company is not presently expanding into new markets. And communities compete for one of Google's few fiber networks.

In 2010, Monroe County Executive Maggie Brooks and then-Mayor Bob Duffy partnered in an attempt to get Google to build a fiber optic network in the county. They said that since Rochester has a growing medical, high tech, and higher education economy, the community would be a perfect fit. And they said it would bring jobs to the area. 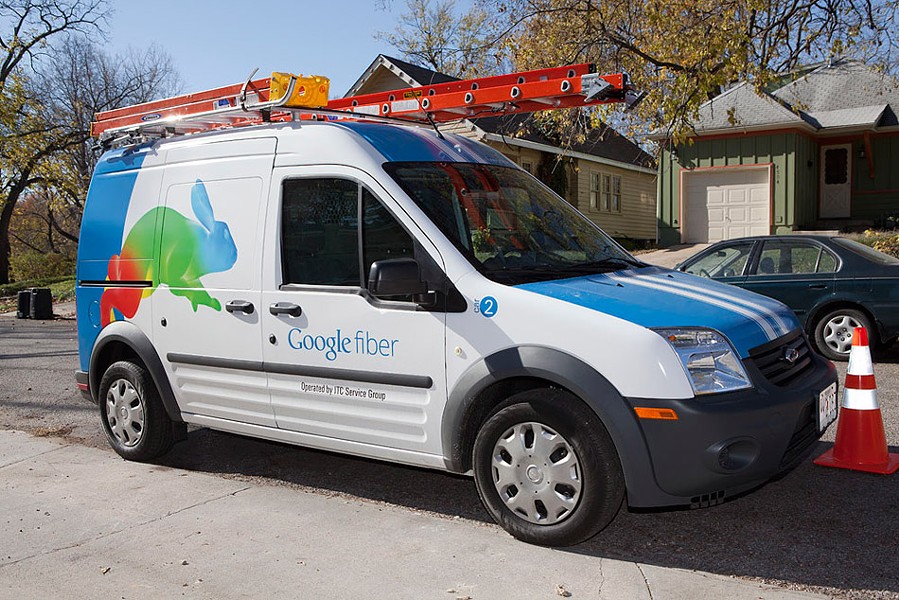 But Rochester and many other communities lost out to Kansas City, where Google has started building its network and connecting it to homes and businesses. The company is now targeting Austin, Texas, and Provo, Utah, for its next markets.

Google's premise is fairly simple. In part, the company clearly wants people to consume its products and services. But it also wants to push other providers to speed up their systems.

Building out a fiber network can be expensive, though. Google hasn't said how much it's spending to wire Kansas City, but media reports speculate that the initial investment will be approximately $94 million.

Locally, Greenlight Networks has been gradually rolling out a fiber-to-home service. The company is expanding on a neighborhood-by-neighborhood basis, an approach that managing partner Mark Murphy says is based on Google's approach.

The company taps into existing privately-built and owned fiber systems, and then builds out the network to homes and apartment complexes. Home installation carries a one-time $100 charge.

"We really think we've figured out a way to provide the service affordably and really provide speeds that are going to allow people to do more," Murphy says.

Between the growth in streaming video, the increasing number of people working from home, and opportunities in health care and software development, Murphy says he sees a demand.

The catch is that Greenlight's product has a very limited availability. 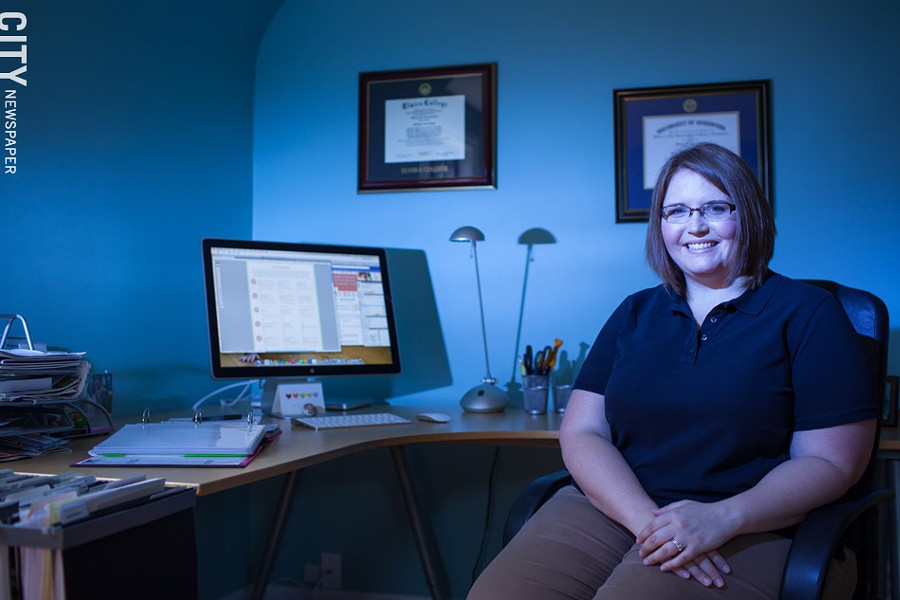 The company started with homes in the Village of Pittsford and has since completed fiber installations in the Erie Harbor and Academy building apartment complexes in Rochester. The Penfield-based startup will next connect the 370-house Meadowbrook neighborhood in Brighton, and part of the city's South Wedge.

Monica Infante, a representative of the Meadowbrook Neighborhood Association, says she's excited to have another option for high-speed Internet.

Infante is a marketing consultant who works from home, and she often works with a network of freelancers. She says it's incredibly important to have a fast, reliable connection, especially when she's sending extremely large files back and forth with freelancers and clients. She can do that now, she says, but the network sometimes gets bogged down.

Right now, a portion of broadband users are pushing the limits of the existing networks with things like streaming video, says Jim Kane, an engineer who's the Meadowbrook association's webmaster. But within a few years, he says, that level of use will be the norm.

But do broadband consumers need the speed that they think they do?

The answer depends on what a person does on the Internet. Someone who primarily checks e-mail and looks at Facebook but doesn't use Netflix or Hulu needs less speed than someone who watches hours of streaming video or telecommutes. And a household with multiple devices and several Internet users will need higher speeds — a bigger conduit, essentially.

But Hartpence says that cable broadband shouldn't be written off, either. Coaxial cable actually has a lot of capacity, he says, and it's all a matter of how the provider uses it.

Time Warner has tried to free up capacity on its coaxial network. The company recently switched its cable access channels from analog signals to digital signals. Time Warner's Plucknette-Farmen says that the shift will allow the company to offer more standard- and high-definition digital channels and reliably offer more Internet capacity.

Hartpence also says that cable networks may be wary of giving consumers unlimited speeds because it increases the chances of bottlenecks. Instead, providers may try to control their limited capacity so that users have a consistent, and more pleasant, experience, he says.

But Google, Greenlight, and other ultra-high-speed Internet providers say that without the bigger data pipes, there's no way to see what innovations users could come up with. It may be that someone creates a novel video service, or revolutionizes the way health care is delivered. Device-makers, too, would develop new products that seize upon or require faster networks.

Those innovations are the undeniable future of the Internet.

"I think a few years from now we'll really see what people can really do with this stuff," Greenlight's Murphy says. "That's where I think it'll become even more exciting."