“Half the people I knew are not around anymore,” he says. “Townes is gone, Lou Reed is gone, Rick Danko is gone, Janis is gone. Joni, almost.

“You can’t argue with gravity and health.”

The list of intriguing people Andersen has been around would take up paragraphs here. Bob Dylan, of course. Dylan recorded one of Andersen’s songs, “Thirsty Boots,” about civil rights and the Freedom Riders of the ’60s. If Dylan does one of your songs, you must be doing something right. 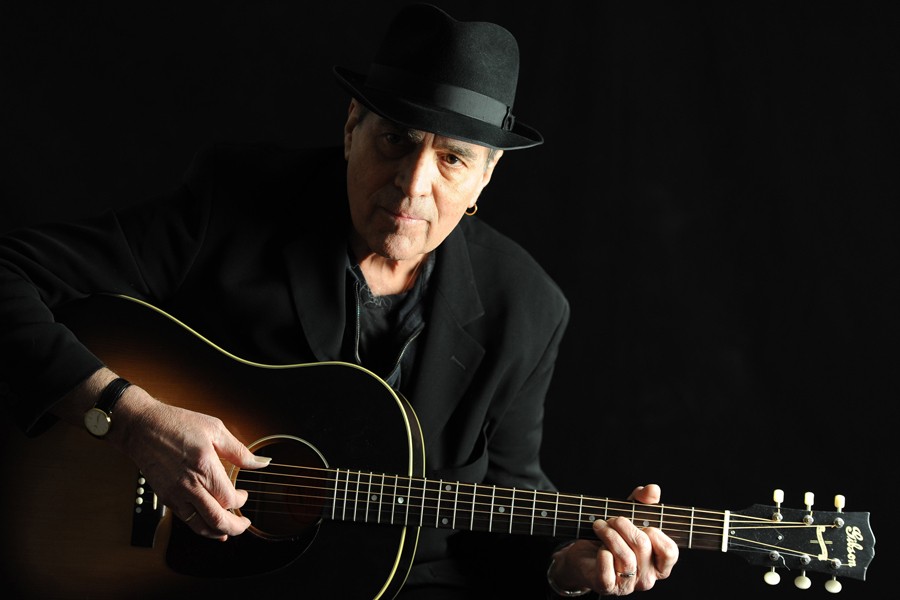 Andersen grew up in Snyder, a town near Buffalo, but as a songwriter he emerged from the Greenwich Village scene. Now he’s talking by phone from his home in The Netherlands. But he hasn’t turned his back on the United States.

That revolution-loaded coil of ’60s songwriters circling our social consciousness brings him to Rochester for a 7:30 p.m. show on Thursday, January 16, at Abilene Bar & Lounge. Rochester’s Jeff Riales opens the night.

Andersen’s released more than 25 albums. Johnny Cash, The Grateful Dead, Fairport Convention, Linda Ronstadt, and Pete Seeger have all recorded his songs. “I’m very interested in creatives, and probably I feel much more akin to artists than anybody else,” Andersen says. “They’re like a kind of, how can I explain it? A virtual family. They’re always around, they’re always on hand, and fortunately I’ve been lucky to work with those people.”

Andersen seems to read a lot. He wrote a critical piece called “The Danger Zone,” published in a collection called “Naked Lunch @ 50: Anniversary Essays,” on the classic surrealistic novel by William Burroughs. “He patently had probably one of the greatest predictive minds in the 20th century,” Andersen says. “I mean, he foresaw a lot of stuff, and he included these insights in his books. And I think people got titillated by these insights and they had a hunch: ‘Yeah, he’s on the right track. This could be true.’”

Indeed, “Naked Lunch” was published in 1959, but characters addicted to oxycodone seem all too familiar today. And the city of Interzone, where “Nothing is true, everything is permitted” has the now-familiar totalitarian truth of a government whose every statement seems a lie.

“And his humor,” Andersen says of Burroughs. “I’m very interested in writers. A lot of people think that writers like, for example, Kafka or James Jones or, I’m trying to think of other writers — Leonard Cohen, for example — people think of them like they’re almost so heavy and complex and hard to get into. But basically they were our literary comedians. They were the ones who really had the humor. Hemingway, he had sarcastic drollness.”

But there’s nothing funny about Andersen’s song, “Rain Falls Down in Amsterdam,” which starts with the Nazis and warns “The Fourth Reich's coming, baby.”

“It’s about the rise in Fascism, which I predicted, like, 30 years ago,” he says. “A lot of times you’re like soothsayers.”

Soothsayer. We should be listening a little more closely.

“It’s tough now to put your finger on things,” Andersen says, “because, you know, with the news cycle 24/7, by the time you want to write something, something else happens, it usurps the thing you’re writing on.”

So he thinks broadly: “Climate change, populist evil, if you will, where people just forget their humanity and just protect themselves out of fear.”

Dwelling on climate change has led to a new song, “Crime Scenes,” as we watch Australia reduced to cinders. “Negligence,” Andersen says. “Purposeful destruction. Greed, the almighty buck coming over the humanity of the world.”

He’s lived in The Netherlands for 15 years. What’s its look like to Andersen, as he gazes across the Atlantic Ocean?

So, he’s frightened. For us?

Here’s a partial list of musicians that Holly Near has recorded with or played with in concerts: Pete Seeger, Arlo Guthrie, Bonnie Raitt, Jackson Browne, Joan Baez, Phil Ochs, and Harry Belafonte. Just to name a few. Notice what they all have in common? Activism. Near has been an anti-war activist, an ardent feminist, and a spokesperson for LGBTQ people. Near will be at Downstairs Cabaret Theatre, 3450 Winton Place in Brighton, for a 7 p.m. show on Thursday, January 16. Tickets are $30. For reservations, call (585) 325-4370…

Dreams do come true! Black Sabbitch, the all-female Black Sabbath tribute band, has a 7:30 p.m. show on Sunday, January 19 at Montage Music Hall, 55 Chestnut Street. Tickets are $15. I just watched a video of “War Pigs,” and lead singer Alice Austin nails Ozzy’s wide-eyed, hair-swinging thing. And, of course, you’ll want to see the February 7 show at Montage with… The Iron Maidens. Guess what that’s all about?