It's no big secret that in certain spots at Mendon Ponds Park, if you hold seeds in your outstretched hands and make like a statue, chickadees and other birds will alight on your fingers to graze the offerings.

Naturally wary of humans, the birds that hunt along Mendon's Birdsong Fairy Trail have learned, through watching other brave ones, that people will feed them and leave them in peace. It's one of the few places that you can have quick contact with a wild creature that isn't facilitated by anything other than patience and the promise of tasty seeds. 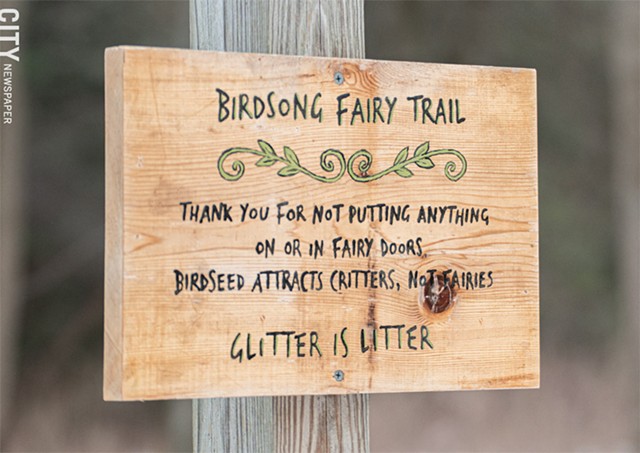 It's a sweet experience to stand noiselessly in the center of the trail, as still as you can, imagining tiny eyes watching your outstretched limbs from even stiller limbs along the edges of the wood, and to feel wings flit close by in nervous calculation before resolving to land on your hand and pick at its offerings.

Even sweeter is visiting with a young child and teaching them one way that calm gentleness can pay off. If the kiddos are just too wiggly for the birds, direct their attention to the trail's evidence of tree-dwelling fairies. Artists Betsy and Chris Marshall have painted tiny doors on trees stumps, limbs, and roots, built bridges connecting the dwellings, and even installed a wee airport. There's a game of ladybug-vs-bumblebee tic-tac-toe, a troll hole, and a little free library.

The first time I successfully got my group of friends to be still long enough for a bird to land on me, I was surprised at how I could barely tell — if not for the minute feeling of grasping claws I wouldn't have felt anything, because their hollow-boned weight hardly registers. And just like that, they're gone again (though once the seal is broken, expect others to take the cue from the first and flit to and from your flat palm).

One friend advises that standing a bit closer to shrubs and trees with branches about your height makes it easier for the birds to trust the situation, as it's a shorter flight to and from your hand. People have had a lot of success with sunflower seeds, which the birds will take and open back in the trees, but they may linger longer on your fingertips if you offer a mix of millet, corn, and other seeds. 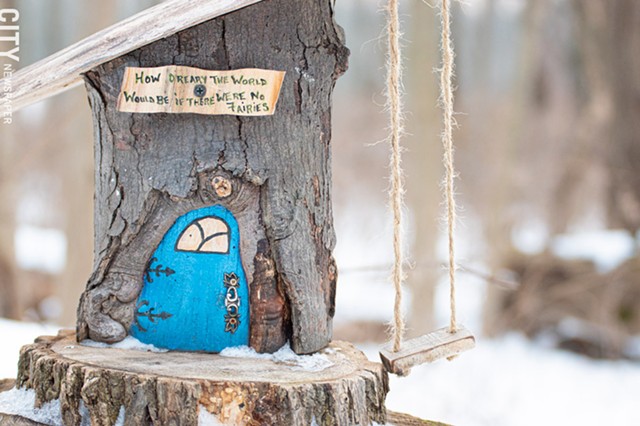 You might think the little birds would be a no-show in the winter, but chickadees and other species stick around instead of migrating south, and they're actually a bit more prone to venture to a calm hand for offered seeds during the colder months when food is more scarce.

Avian rehabilitation center Wild Wings, which is located within Mendon Ponds Park near its west entrance off Clover Street, sells sunflower seeds in the gift shop in case you forgot to bring some.