The seasons of a lifetime 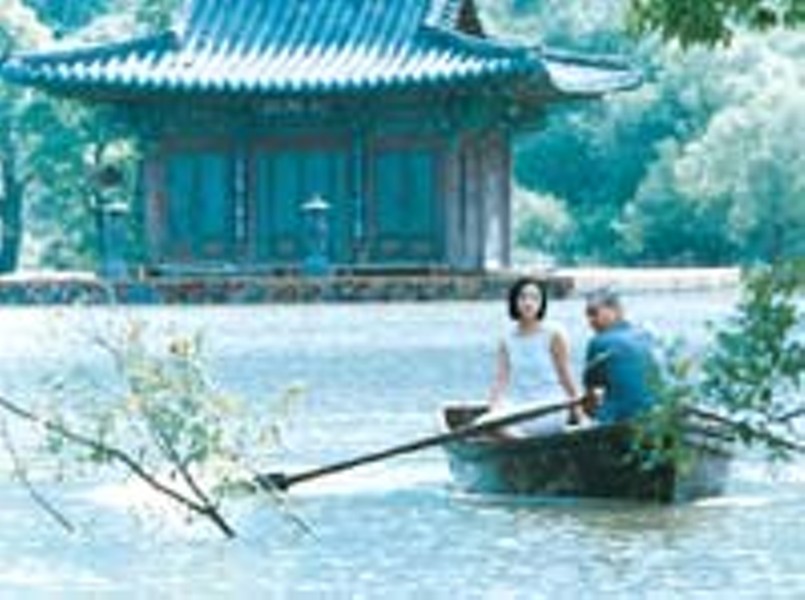 One of the most unusual motion pictures of the year, Spring, Summer, Fall, Winter... and Spring (the title is probably less unwieldy in the original, which renders each section with a single beautiful character), indicates that even in the midst of American cultural hegemony, a world cinema continues to exist and even thrive.

The movie comes from Korea, an oddity in itself, since few Americans, even students of the art, know anything about Korean film. Its writer-director, Kim Ki-duk, who also appears in the picture, has, however, attained a measure of international recognition, including prizes at numerous film festivals from Venice to Pusan, and this work is the Korean entry for Best Foreign Film at the Academy Awards.

As any Western viewer would expect, the movie differs drastically from the familiar product of the American film industry. The deceptive simplicity of its plot, its limited cast, its single setting, its subdued emotions, its absolute lack of glamour, and its somehow overpowering stillness contrast acutely with the rapid pace, violent action, dazzling effects, polished technique, and formulaic slickness of the typical contemporary Hollywood flick.

In keeping with its story and characters, moreover, Spring, Summer also presents an entirely Eastern approach to its material practically guaranteed to disappoint the expectations of a great many Western audiences.

As its title promises, the movie follows the seasons, placing each of its five chapters in the designated period over the span of many years, and setting its action in a small monastic retreat that floats on a raft in the middle of a placid lake surrounded by mountains. In "Spring," an elderly monk, referred to in the materials as Old Monk, lives there with his pupil, Child Monk, whom he apparently instructs in Buddhist practice.

When the boy tortures some small animals by tying stones to them, the monk punishes him and tells him that he will carry that stone in his heart for the rest of his life. The statement proves unexpectedly prophetic in a later episode.

In "Summer," Child Monk, now the adolescent Boy Monk, falls in love with a young woman brought to the monastery by her mother for spiritual healing. The two young people make love, which the Old Monk understands as a natural act, but he also warns them against the results of lust, which he believes will lead to the desire to possess, followed by the desire to destroy. Ignoring the lessons of his master, the young man deserts the hermitage and his vocation to follow the urgent demands of his passion.

The pupil, now called Young Adult Monk in the script, returns years later in "Fall," on the run from the police for committing the act the Old Monk warned him against, searching for both sanctuary and forgiveness. The peculiar form of penitence the master assigns him ends up involving the two detectives who come to arrest him and beautifully seals a sort of spiritual connection among them all. His departure also engenders a further, tragic, surprising, but also inevitable act that defines something of the peculiar spirituality of the situation and its people.

In "Winter," perhaps the strangest and most mysterious of all the episodes, a new character, Adult Monk, played by the director, reopens the empty hermitage and voluntarily undergoes a curious act of repentance that presumably expiates all the previous deeds of cruelty and violence. When the final season, the last "Spring," arrives, the cycle promises to begin anew, with a new monk and a new child disciple.

The movie of course amounts to much more than the sum of those parts or the scanty survey of the several brief plots. Its almost purely visual narrative, refreshingly, forces the viewer to comprehend the characters and action without any explanation and with barely any dialogue. In keeping with its themes, it practices a sort of Zen minimalism, combining a stylized austerity of texture with a static but constantly evolving sense of scene and surroundings.

The picture's visual beauty fuses its subjects and themes with a remarkable sense of balance and completion. Its style almost entirely expresses its meanings, and its stringent control of action and gesture creates a resonance and lyricism that transcend the simple details of its surfaces. Its familiar Buddhist understanding that desire --- the desire to have, the desire to be --- engenders suffering may suggest a bleak attitude toward both flesh and spirit, but seems perfectly suited to its concentration on the small actions of ordinary life.

Finally, Spring, Summer displays a decidedly unusual and completely un-Western sense of quietude. Its repeated shots of the hermitage floating serenely in the middle of the lake through the changing seasons, its mere suggestions of setting and movement, its absolute control of speech and gesture, create a kind of small masterpiece of what I can only think of as Zen understatement.