The Rustix shake off nearly 50 years of dust 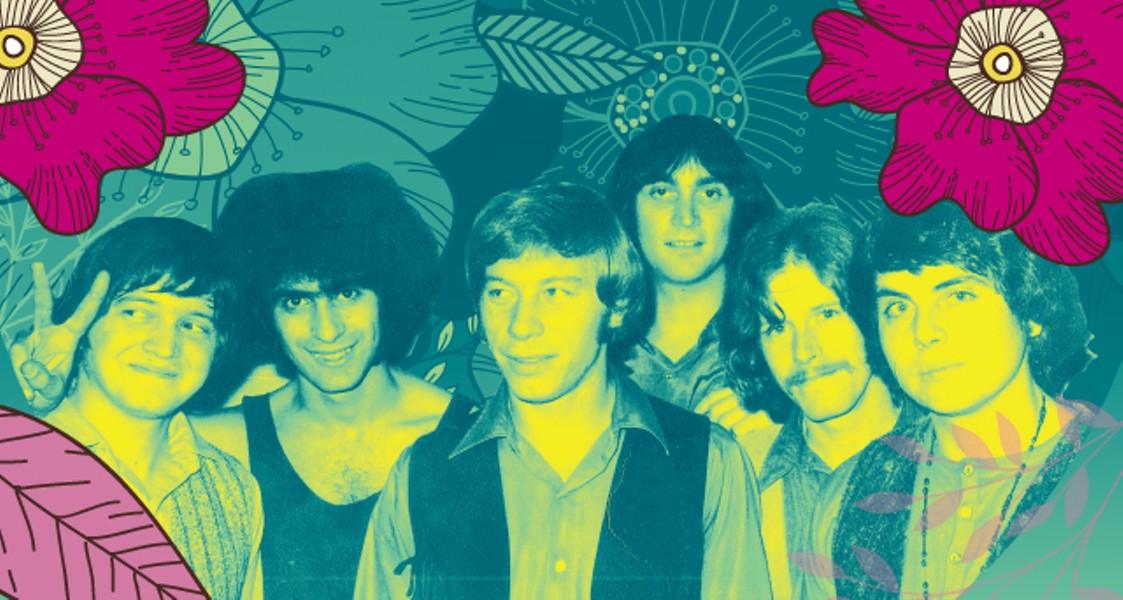 It was early in January and David Colon was at home minding his own business when the phone rang. It was Karl LaPorta from the Rochester Music Hall of Fame calling to say that The Rustix, a band Colon drummed with years ago, was going to be inducted into the organization's 2016 class. The band was a Rochester-based blue-eyed soul group that tore up the scene from 1966 to 1972. Colon was surprised, to say the least; it had been 50 years since the band had started, finished, and left its mark on the area.

When Rustix singer Chuck Brucato got word, he was surprised, although he had heard rumblings but nothing solid from the Hall of Fame until now. "They'd been mentioning it for a couple of years," Brucato says. "But again, it was a surprise and a real honor."

The Rustix —Brucato; Colon; bassist Ron Collins; guitarist Bob D'Andrea; George Cocchino, who replaced D'andrea on guitar; Vinnie Strenk on keys; and vocalist Al Galich — recorded two albums and a handful of singles in its brief lifespan, and hasn't played together since a reunion show in 1979. The band is planning on performing at the induction ceremonies and has been hard at work polishing its chops. After all, Brucato doesn't want The Rustix to sound rusty.

"We've got five rehearsals behind us," he says. "And we'll probably have five more."

"And just individually practicing every day," Colon adds in. "Just trying to get our bodies back in shape like they were in the 70's."

Original band members D'Andrea and Galich have passed away, and Collins couldn't make it to this interview, so three of the surviving Rustix sat down to discuss the band's history, its impact on the local scene, and point fingers at who's to blame: They unanimously singled out Brucato.

"Well it is my fault," he says. Galich and Brucato met while stationed with the Army in Carlsberg, Germany. "We sang all the time; joined the All-Army contest, and went all the way to the finals."

When the two got back from duty, they picked up again with the singing. It was strictly for grins.

"We started out with four singers," he says. "And we did it as a hobby three nights a week. We just loved it. Some guys like bowling; we did this."

One night after a rehearsal, the guys were having a few beers at a nearby saloon when fate walked in with money burning a hole in its pocket.

"We were singing in the booth, and out of nowhere, this guy comes up," Brucato says. "'You guys sound pretty good,' he said. 'I just opened up a club in Ontario. Why don't you come down and play there?'"

"We don't have a band or any equipment,"

"Well, how much is the equipment?"

Thumbs went up all around the booth. "We had more guts than brains," Brucato says.

The guys pieced together a Rube Goldberg PA out of speakers they found in Brucato's parents' basement, a 50-watt amplifier, and two cheap mics. The Rustix was born.

"We were just happy" to be at our first show, Brucato says. "I don't know if the people liked it, but we did. It was just for kicks, for fun. We all had jobs."

The Rustix sound was coming together into harmony-rich rock 'n' roll.

"We had two singers," Brucato says. "Al and I were the two front men, and we had a kind of Righteous Brothers, Rascals-type of sound. And Ronnie Collins and Bob D'Andrea had higher voices, so we really had a good harmony thing going." 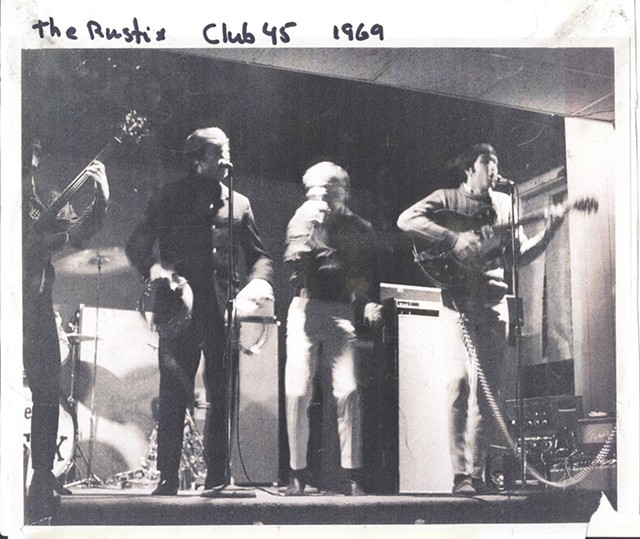 The band was building a following, and kept graduating to bigger clubs to accommodate the ever-growing number of fans. Eventually The Rustix wound up at the Varsity Club on Scottsville Road where they played afternoons while The Invictas played nights. This is where and when Colon officially joined the band. He was drumming in The Invictas when the Rustix drummer at the time, Bobby Blandino, left the band. Brucato approached Colon with the gig.

"I went for it," Colon says. "They were playing more sophisticated music, which is what I wanted to do. That final lineup stayed together for five years."

The Rustix recorded six singles, starting in 1966 with the cut "Leaving Here" b/w "When I Get Home" on Cadet Records, a spin-off label of Chess Records in Chicago, and two albums: "Bedlam" (1969), which reached the Billboard Top 100, and "Come On People" (1970) on Rare Earth Records, a subsidiary of Motown Records.

"Recording at Motown Records at the height of its popularity was really quite an experience," Brucato says. "I got to watch Stevie Wonder record, Gladys Knight, Marvin Gaye..." 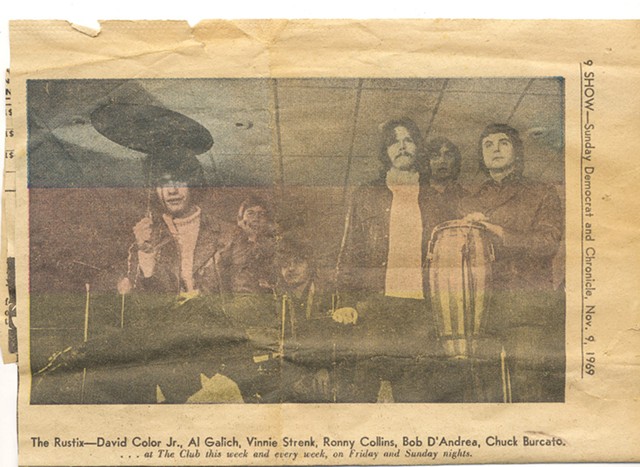 And though the band did original tunes, it was the covers that got the Rustix deluxe treatment.

"We got a kick out of doing covers our own way," Brucato says. Like the band's bongo-crazy, funk-infused, Latin twist on Otis Redding's "Hard To Handle."

Meanwhile, back on the home front, the band had moved to performing at Brighton Bowl, but was quickly outgrowing it. The Rustix routinely drew 4,000 fans. 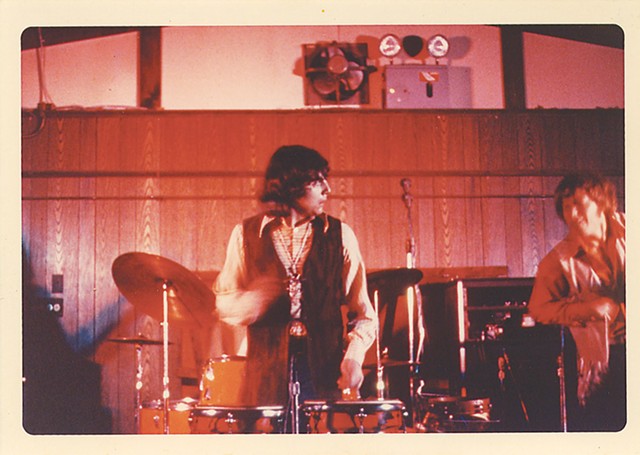 The band packed Brighton Bowl "so much that the owner, Dave Goldman, built another club, Club 45 on Gould Street, just to accommodate the crowd," Brucato says.

Colon's drum solos were off the charts, and off the stage when he would go out into the crowd and drum on everything: the floor, the ceiling, even people's glasses.

Not everyone was happy, though. Club 45's success was met with a couple of bomb scares — from what the band figures were rival club owners.

"We packed that place every weekend," Colon says. "With lines going out the door. It was a wonderful time."

Beside these hometown get-downs with local sensations — like The Show Stoppers, The Brass Buttons, The Invictas, and Wilmer and the Dukes — and shows in and around the tri-state area, these hometown heroes warmed the boards for some heavy hitters. The Rustix opened for artists like Grand Funk Railroad, Mountain, The Four Tops, and Jimi Hendrix. That Hendrix show was on the night he was none too pleased with the Rochester crowd. He reportedly flipped everyone the bird and slinked off stage.

Brucato still isn't sure what transpired. "I don't know what happened there," he says. "Next thing I know, he walked off. He didn't look too happy, and just left."

"But he was really a kind guy," Colon says. "He sat and talked with us. We were amazed by him."

By 1972, musical tastes were shifting. The Rustix recorded a third album that was never released. Colon left the band to get his art degree, leaving the band to soldier on. But it was clear to Brucato.

"I guess it just went as far as it could," he says. "There's a certain magic with a group of people, and when some leave, it loses that magic. And we were getting to the age that if we hadn't made it by then it was time to go on to other things." 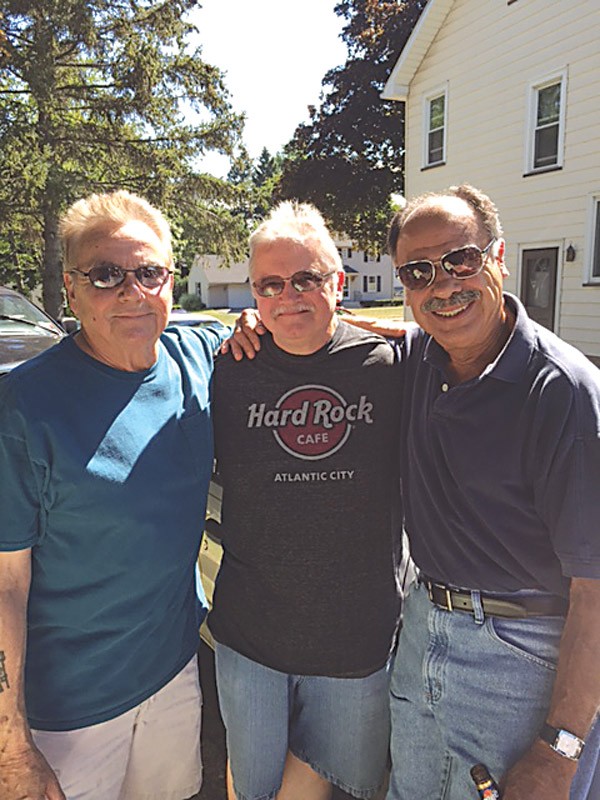 But life happens. And The Rustix happened. The band's fans haven't forgotten. That's something that Colon cherishes. "I'm amazed when people come up to me today and say, 'That was the best time of our lives."'

They're heaping even more on to the already impressive list of notable Rochester music royalty with the 5th annual Rochester Music Hall of Fame induction ceremony. This year's honorees are:

Howard Hanson — Pulitzer Prize-winning composer and former director of the Eastman School of Music. Interesting fact: His Symphony No. 2, "Romantic," was featured during the closing credits to the movie "Alien."

Along with performances from the Hall of Fame house band, Prime Time Funk, the ceremony will feature performances honoring each inductee:

Pee Wee Ellis will perform with Christian McBride, Maceo Parker, and Fred Wesley for a set of tunes Ellis performed with James Brown.

A string ensemble of Eastman School of Music students will perform the music of Howard Hanson.

Surviving members of The Rustix will perform the blue-eyed soul that made them a huge draw in Rochester in the late-60's and early-70's.

For an interview with Wes Beech and Plasmatics manager Rod Swenson, click here.