The RPO announces 2020-21 season, the last of the Ward Stare era

The Rochester Philharmonic Orchestra’s 2020-21 season will inevitably be viewed through the lens of Ward Stare’s final season as music director. In six full seasons with the RPO, Stare has helped to create a period of stable artistic leadership following the uncertainty left in the wake of Arild Remmereit’s firing in 2013. On February 11, M&T Bank announced that it is awarding the RPO with a $110,000 grant over three years, in order to bolster the orchestra’s resources for concert programming.   Since being hired in 2014, Stare has had a tenure characterized by a cohesive, vibrant RPO sound and a calculated balance between canonic works by beloved composers — such as Beethoven, Shostakovich, and Samuel Barber — and new pieces by prominent and rising American composers. Stare’s defining triumph with the RPO was the 2018 world premiere of Jennifer Higdon’s Harp Concerto, with soloist Yolanda Kondonassis. Stare and company’s subsequent recording of the new composition, on the 2019 album “American Rapture” via Azica Records, received the 2020 Grammy Award for Best Contemporary Classical Composition.

Looking ahead to the 2020-21 RPO season, highlighted in a free Community Concert on Tuesday, February 11, 7 p.m. at Kodak Hall, Stare continues this careful balance between old and new. All in all, the upcoming season of programming is decidedly conservative, but has plenty of crowd-pleasers with which few classical music fans could argue. That said, there are a handful of poignant modern works sprinkled in. We need look no further than “Beethoven 250,” a season-long series of concerts honoring the 250th anniversary of the birth of the most well-known classical composer in history.

“He was my first love as a composer, so it’s wonderful to have his music featured so prominently in this season," Stare said of Beethoven in a recent interview with WXXI Classical 91.5's Julia Figueras.


On September 24 and 26, the festivities begin fittingly with Beethoven’s most iconic work, Symphony No. 5, and the little four-note theme that changed music forever. It was Beethoven 5 that inspired a young Christopher Rouse to become a composer; it’s no surprise then that the rhythm of that legendary theme factors into the late Rouse’s own Symphony No. 5, which will also be on the program. Prokofiev’s Violin Concerto No. 1, featuring soloist Benjamin Beilman, rounds out the season opener.

Most prominently, the RPO will perform each of Beethoven’s nine symphonies over the course of the season. It should be noted that in addition to Symphony No. 5, Stare will only be leading the performances of Nos. 3 and 6, but those concerts are well-worth waiting for. The November 19 and 21 concerts feature the consummate clarity of the Third Symphony, the “Eroica,” alongside the return of Jennifer Higdon’s music to Kodak Hall, in the form of her Low Brass Concerto. On May 27 and 29, Beethoven’s enchanting Sixth Symphony, the “Pastoral,” will have an intriguing program partner in Finnish composer Kalevi Aho’s “Siedi (Percussion Concerto),” a mysterious and at times joyfully visceral composition. Percussionist Colin Currie will be the soloist.

“It’s so powerful and it’s so effective, and it really gives you a feel of Mother Earth and nature,” Stare says of the percussion concerto. “And it’s so grounded in that way, and I just thought, what a perfect pairing with the Pastoral Symphony, which also is an homage to nature.” 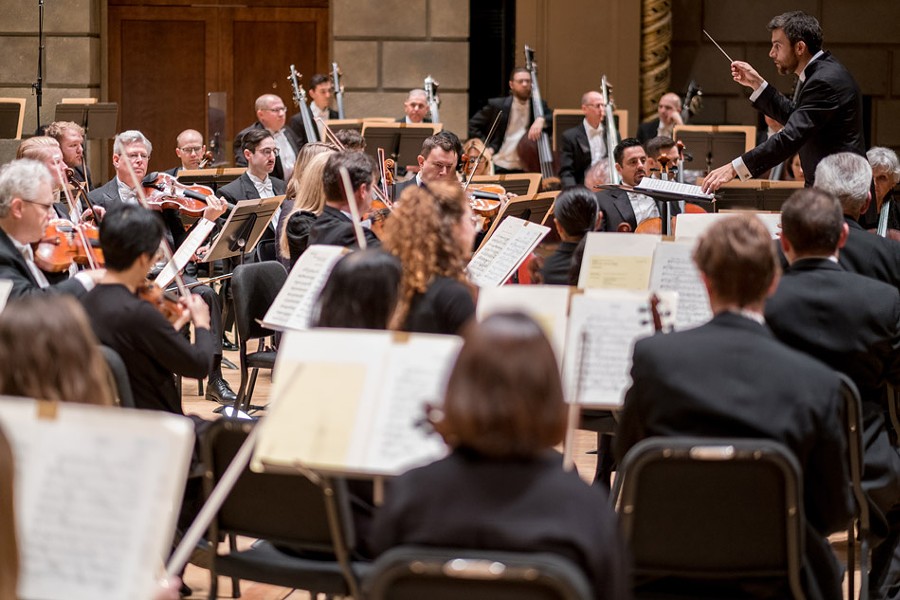 Additionally, Stare will lead the orchestra in Beethoven’s Violin Concerto, with the electrifying soloist Stefan Jackiw, on April 15 and 17. Those concerts also boast the irrepressible symphonic charisma of Richard Strauss (“Death and Transfiguration”) and Wagner (selections from the opera “Tannhauser”).

Guest conductors will be at the helm for the other Beethoven symphonies. Predicting that the February 25 and 27 concerts — with Rossen Milanov on the podium — will be dynamic feels like an easy bet to make. In addition to Beethoven’s powerful Eighth Symphony, the packed bill features Rachmaninoff’s Second Piano Concerto (with soloist Natasha Paremski), Prokofiev’s Symphony No. 1, and the mercurial electroacoustic work “Auditorium” by Mason Bates — one of the most compelling composers working today.

In a kind of callback to his previous seasons as RPO music director, Ward Stare once again turns his baton to the music of Samuel Barber. Soloist Olga Kern will return to join the orchestra for the 20th-century American composer’s Piano Concerto on October 22 and 24, supplemented by music from Copland, John Adams, and the world premiere of composer-pianist Aaron Diehl’s “The Dozens.” On November 5 and 7, the RPO and its Concertmaster Juliana Athayde will play Barber’s Violin Concerto, paired with Beethoven’s Second Symphony. David Danzmayr conducts.

Stare ends his time at the helm of the RPO in dramatic fashion. On May 6 and 8, the orchestra will undertake Mahler’s Symphony No. 8, a captivating work of Romantic grandiosity, also known as the “Symphony of a Thousand.” To reach closer to that number of musicians, Stare hopes to engage a larger network of community members to sing in the chorus.

As has been Stare’s annual tradition, he closes the season with an opera. On June 3 and 5, “Tosca,” Puccini’s hair-raising verismo drama about love, political resistance, and treachery will be presented in a semi-staged concert version of the famous work.

The 2020-21 Orkidstra series includes a live concert performance and screening of the Disney Pixar movie “Coco,” on November 1. Enrico Lopez-Yañez leads the RPO in “Happy Birthday Beethoven!” on May 16. The four concerts in the orchestra’s Sunday Matinee series, which all feature more music from Beethoven, will move from Hochstein Performance Hall to the Glazer Music Performance Center’s Beston Hall, at Nazareth College.

Apart from the RPO’s collaboration with PUSH Physical Theatre and Rochester choreographer Jamey Leverett on April 23 and 24, the 2020-21 Pops series is underwhelming and predictable. Once again, Principal Pops Conductor Jeff Tyzik has plenty of John Williams’ film music planned, as well as safe programs focused on the music of Broadway, Motown, and The Beatles. Pops concerts can provide the opportunity to engage with new audiences who might not normally attend an orchestra concert. Programs that highlight innovative hip-hop music, video game scores, and modern singer-songwriters with an affinity for orchestral arrangements, for example, might have gone a long way in that regard.