The realistic grief of ‘Cherry’ 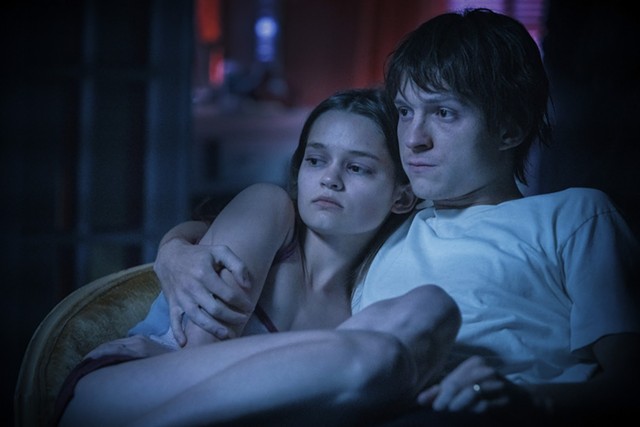 Fitting several different chapters of a character's life into a just over two-hour film is never easy, but brothers Anthony Russo and Joe Russo tackle the challenge effortlessly in their new war, drug, and trauma-filled drama, “Cherry.” Since directing four blockbuster Marvel films, including “Avengers: Endgame,” the Russo brothers have changed things up to explore the hard realities of substance abuse and veterans’ struggles when they return from duty.

Based on the autofictional novel of the same name by Nico Walker, the Russo brothers’ film adaptation is full of dark, brutally-emotional storytelling brought to life by Tom Holland and Ciara Bravo’s superb acting.

Known for the “Spider-Man” films, in “Cherry” Tom Holland plays a different type of hero — an unnamed (though designated as Cherry in the film’s credits), modern-day soldier battling extreme anxiety and PTSD.

A college dropout with a dissipating sense of self, Cherry casually enlists himself in the United States Army, almost entirely naive to what it will entail. He’s sent into Iraq as a medic and becomes immersed in a world of violence and death. After his first experience with gore, a major crudely tells him that his “cherry is popped.”

Cherry wants nothing more than to return home to his beloved Emily (Ciara Bravo), but finds that even after his service has ended, the war hasn’t released him. He desperately tries to suppress flashbacks, nightmares, and moments of rage, often with whatever pill or drug he can get his hands on. In his pursuit of peace, Cherry leads Emily and other close friends on a perpetual cycle of crime and drug addiction.

The narrative is told nearly entirely from Cherry’s point of view, with an incredible scope of visual storytelling, the pacing reminiscent of early Scorsese film “Who’s That Knocking at My Door?” but with a subject matter that’s more in the territory of Oliver Stone’s “Platoon.”

The film is broken up into a series of segments of Cherry’s life, spanning from when he met Emily in a college class in 2002, until 2021. Each chapter has a separate visual and cinematic style that gives the audience a clear indication of where Cherry’s mind is throughout the film.

Some shots are interrupted with Cherry’s sardonic voiceover, narrating what he was doing or thinking in a particular moment, almost as if he’s replaying the events of his life back to us. Other times, when Cherry is in a particularly traumatic scenario, he copes by dissociating, and the audience sees him completely from the outside, losing access to his internal world.

But viewers cannot help but connect with Cherry as his early-twenties unfold before their eyes. The film offers intimate inroads for every high and low, adding to the heartbreaking realism of the story. Cherry and Emily represent someone that most people have encountered at some point, so pervasive are the problems of PTSD, addiction, and untreated mental illness.

It’s a bleak, yet gorgeous and complex film that at times feels overwhelming. And the painful realism lingers as the film ends on an uncomfortable note of uncertainty.


Joe Massaro is a freelancer for CITY. Feedback on this article can be directed to Rebecca Rafferty, CITY’s life editor, at becca@rochester-citynews.com.