The park and resurrection

PHOTO BY MARK CHAMBERLIN Natcore technician Wendy Ahearn in a clean room in the company's facility at Eastman Business Park.

Rochester scored a win a couple of years ago when New Jersey-based Natcore Technologies moved its solar cell research and development work to Eastman Business Park. Eastman, which is the former Kodak Park, beat out several competitors in the company's nationwide site search.

And recently, state and Natcore officials announced that the company plans to expand at the park.

The company's decisions show that Rochester is a serious contender when it comes to attracting and retaining promising tech companies. Natcore's innovations in solar cell materials and production could eventually mean cheaper, more efficient cells.

"One of the things that we noticed with the Kodak people that work with us, they've got a basic instinct to look at something that's in the laboratory and if they cannot see a direct path to commercialization, they throw it out," Provini says. "They focus on 'What do we have? Do we see a direct path to commercialization? And let's follow that path,' which was a great help for us."

A few years ago, Kodak executives decided to remake the former Kodak Park into a multi-tenant technology and industrial center; Natcore is one of approximately 50 businesses in the park. The executives realized that the park's infrastructure, equipment, and expertise could attract companies in several growing industries, officials say.

But efforts to remake the park stumbled last year when Kodak filed for bankruptcy. Now that Kodak has emerged from Chapter 11, company and economic development officials see renewed promise for the park. They say that it's fertile ground for technological innovation — the kind that will lead to a new generation of American manufacturing and more jobs for Rochester. 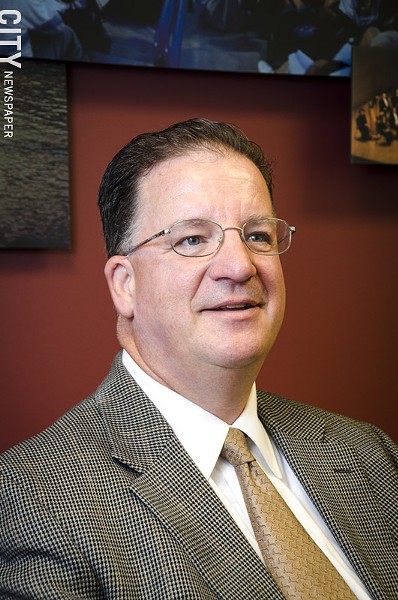 Initially, Natcore planned to work with Kodak to jointly manufacture flexible solar cells in roll form, Provini says. The partnership seemed logical because of Kodak's experience with coating flexible materials, he says. Photo and motion picture film is, after all, a base material layered with light-sensitive chemicals.

They ran into some obstacles, however, and the initial plan didn't work out, though Provini says that Natcore is still pursuing the technology.

"We would never be in a position to build a clean room like that," he says. "So what we have as a small company now is a wonderful, state-of-the-art R&D facility that we could never afford to have."

The company also has access to other specialized infrastructure, including a de-ionized water supply, steam, and toxic waste disposal infrastructure. And the facility is equipped with important basics, like phone lines.

The result: the company has been able to focus on its research and development work, Provini says. The money that it would have had to spend outfitting a facility instead goes into buying tools and equipment, he says, and hiring.

Kodak Park, as many still call it, has long been a vital part of the local economy.

It's been a place for generations of Rochesterians to find jobs — though gone are the days when you could walk from your high school graduation and into a well-paying job at the park. The jobs now tend to be more specialized.

Workers at Kodak and the park's other companies bring home $550 million a year in wages. And the park also pumps millions of property tax dollars into the Rochester, Greece, and Monroe County governments.

The 16-million-square-foot complex starts in the City of Rochester at the intersection of Lake Avenue and West Ridge Road. Some local economic development officials call it a megasite, and the park's marketing materials refer to it as "a city within a city."

When Kodak opened the site to outside tenants, the company also rebranded the park as Eastman Business Park. The idea was born out of necessity, officials say, since the shrinking company had increasing amounts of vacant space, even after demolishing approximately 6 million square feet of buildings.

Some park property has been sold off, including a 625,000 square foot building to LiDestri Foods in 2009. The company operates a manufacturing and product development facility there.

Other space has been leased to companies like UniPixel. The company makes touch screen sensors in the same building where Kodak makes its motion picture film. Alt says he expects that UniPixel's production will grow as Kodak's film production declines, which means that over time, the building's use will change.

The uncertainty caused by Kodak's bankruptcy was an obstacle to progress at the park, Alt says, because it kept some potential tenants from committing.

But the company's emergence from bankruptcy last month resolved several of those issues, he says. In a settlement with New York State, Kodak agreed to set aside $49 million for an environmental trust fund. In return, the state said it wouldn't hold any tenant other than Kodak liable for historic pollution at the site.

But at least one issue remains unsettled: Who will own Eastman Business Park in the future? And that question doesn't have a simple answer.

As part of the company's agreement with the state, Kodak committed to maintaining a substantial presence at the park. But Kodak is now a company focused on providing printing and technology services to other companies. It's not a real estate developer or broker.

Alt says that Kodak doesn't have a clear plan to remain a landlord or become a tenant. Rather, it plans to "play the opportunities that become available to us," he says, regarding ownership of the park. Company officials are working with local leaders, visiting other industrial sites, and networking with industrial developers, Alt says.

"Everybody is interested in creating the best site in the Northeast, if not the country," he says. "We're really in uncharted waters. There's no roadmap that you can take from other facilities this size because it's just such a unique facility."

During the meeting, council co-chair and University of Rochester President Joel Seligman said that the council's vision of transferring the park to a new developer is "now achievable." The council's purpose is to guide state economic development investments and incentives for the region. (Seligman was a member of Kodak's Board of Directors until the company emerged from bankruptcy.)

Greater Rochester Enterprise's Peterson, who also serves on the regional council, says that the ideal arrangement is to sell the park to a single developer who would make money by promoting the park and bringing in new tenants.

Some companies, developers, and investment firms specialize in industrial parks and are experts at running them, he says. And a dedicated, deep-pocketed developer would be able to continue investing in park infrastructure such as roads and railroad spurs, he says.

"There's no doubt that the path going forward is more heavy utilization of the Eastman Business Park and more businesses in it," Peterson says. "The question is, is it going to be done piecemeal or wholesale in one unit? And the market's going to dictate what's actually going to happen."

For now, Kodak and economic development officials have identified and targeted three industries that they want to attract to the park:

• Functional films, which are thin, flexible materials coated to make things like circuits, touch screen sensors, or battery components. Eastman Business Park has a commercialization center for the films and is home to several businesses built around the technology.

• Energy storage, or in layman's terms, batteries, fuel cells, and solar technologies. Natcore falls into this category, as does NOHMS, a company developing advanced lithium battery technology. The park is also home to a battery commercialization center operated by NY-BEST, a consortium of businesses, utilities, universities, and government officials focused on advancing energy storage technology.

• Biomaterials, a category that includes biochemical companies like the DuPont subsidiary Genencor; Novomer, which makes polymers out of carbon dioxide waste streams; and biofuels operations like Sweetwater Energy, which is led by Paetec founder Arunas Chesonis. (All of those companies have a presence in the park.)

Those three industries build on Kodak's history as essentially a materials science and chemical manufacturing company. They use the same lab, manufacturing, and industrial equipment and infrastructure that Kodak traditionally used. Businesses at the park are essentially taking Kodak's processes and adapting them for their needs, Peterson says.

And officials say that by offering companies access to people with knowledge of the equipment and the commercialization process, they can attract and retain high-tech companies.

And by locating in the Rochester area, the companies can also draw on the experience and knowledge of former Xerox and Bausch and Lomb employees, as well as experts at the University of Rochester and Rochester Institute of Technology.

"If we were just offering space, we probably couldn't compete," says Alt, the park's director. "We want to offer the ability to solve your technical problem and then give you one of the best places in the US to do your manufacturing."

For the third consecutive year, the Finger Lakes Regional Economic Development Council has listed the park as its top priority, which means that the park and its tenants get some welcome extra attention from the state. That can include assistance with regulatory compliance or tax credits for companies moving into the park.

In a statement issued in response to several questions, Empire State Development officials say that they want to attract research, development, and advanced manufacturing facilities, including start-ups and large companies to Eastman Business Park. With the company's bankruptcy resolved, state and local officials can put their efforts toward attracting new businesses, the statement says.

"This will require a tremendous amount of focus, creativity, and effort," say ESD officials.