Having it both ways

January 07, 2020
A heavy electric guitar riff is answered by a group of string players with a more classical-sounding set of phrases. The riff then develops in a manner you might expect from a composer of Mozart or Beethoven’s time — if they had grown up listening to Led Zeppelin and The Supremes.

A cello plays a melody that gradually ascends, and the piano supports it with chords — giving it a feeling at turns hopeful and bittersweet, evoking a country waltz or a pop ballad. 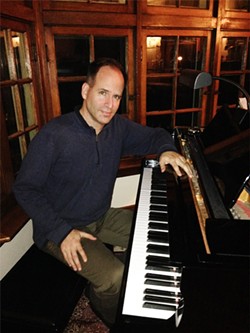 As in these two musical moments from his guitar quintet and his second cello sonata, David Temperley composes tuneful, expressive pieces in a classical mold. But he also draws on influences from the popular music he grew up listening to on the radio. These inspirations included disco, The Rolling Stones, James Taylor, and The Police.

Each piece that he writes normally starts with an idea that sneaks up on him when he is doing something else. “I’m in the shower or I’m driving to work or doing the dishes, and something will come into my head that I really like,” Temperley says, “and that will be the motivation to write a piece.”

Temperley’s wide-ranging musical background helps shape these ideas. He remembers that when he was growing up in Central Illinois, classical music “always seemed like a living thing.” His father, a musicologist and amateur pianist, would have people over to play chamber music in their home.

David started listening to rock music when he was 12 as a way to seem cool, but soon discovered that he really liked the music. He has fond memories of hearing an eclectic mix of music on WLS, a Top 40 AM radio station out of Chicago. He played piano, had a brief stint as a keyboard player in a rock band and started writing songs, but decided to study history in college instead. Then he moved to New York City, where he worked as a pianist for ballet classes.

“And in ballet,” Temperley says, “they really want you to play very pretty classical-sounding music, and it’s all got to be 16-measure chunks. Very rhythmically square chunks.”

He soon got tired of what he describes as “playing existing music,” and decided that he would improvise everything that he would play, while still staying within the lines so that it fit the dance class. He challenged himself: “You’ve got to play something classical-sounding that’s 32 measures long. How are you going to make it interesting?”

Temperley developed his compositional style while working out the answers to that question, working elements of popular music into the classical forms and “gently pushing at the boundaries of the style,” he says.

He decided he wanted to do more with music than bang out accompaniments for ballet classes, and write more music beyond his dance class experiments. He went back to school to study composition at Columbia University. He knew what sort of music he wanted to write, but he found that didn’t fit in with what his teachers expected. “I think they all thought I was kinda weird,” he says. “And I was…in that context.”

Temperley says that in academic circles, creating compositions that are new, different, and mold-breaking is a priority. “I think there are original things about my music, but they’re rather subtle,” he says. “I might use a progression in a different way than a classical composer would, or do something different with form or phrase structure, but it’s not something I could point to as a radical innovation.”

In the realm of “serious composition,” Temperley experienced pushback, causing him to rethink the idea of choosing the career of an academic composer. So he switched to music theory, the study of how music works: melody, rhythm, harmony, phrases, structure, and form. Success followed.

He has written extensively about music theory, language, and cognitive science. These pursuits brought him to Rochester. David Temperley has been a professor of music theory at the Eastman School of Music for the past 20 years.

His research still draws on his shared love of classical and pop music. His third and most recent book is “The Musical Language of Rock.”

“There hasn’t been a lot of theory of rock,” he says in summary. “There have been a lot of analyses, but there isn’t a sort of consensus about the basic principles of how the styles work, as in classical music.”

While Temperley acknowledges that many rock musicians and songwriters don’t have a background in music theory, he says that his writings detail how their music is structured, even if they are doing it subconsciously.

Writing his own music remained important to Temperley, but he mostly put it on hold for about 12 years as he was building his career as a music theorist: teaching, researching, and publishing articles and books. Now, that Temperley is more established and tenured, he has felt free to take more time for composing.

His vision has held true. The music he is writing now is in a similar style to what set him apart as a student: tuneful, well-constructed classical chamber music with elements of pop and rock interwoven throughout.

Recent compositions include a sonata for clarinet and piano, which he premiered at an “Eastman at Washington Square” concert with clarinetist Andrew Brown last year, and a horn sonata written for W. Peter Kurau. He’s also performed his songs as part of the Rochester Fringe Festival, and he’s planning a concert this fall with composer and Nazareth College professor Octavio Vazquez.

“My style hadn’t changed,” Temperley says. “And I still wanted to write the same kind of music that I had been writing in the old days. Whether that means I am stubborn or incapable of evolving — or have a very constant aesthetic vision — I don’t know. You could look at it in both ways.”