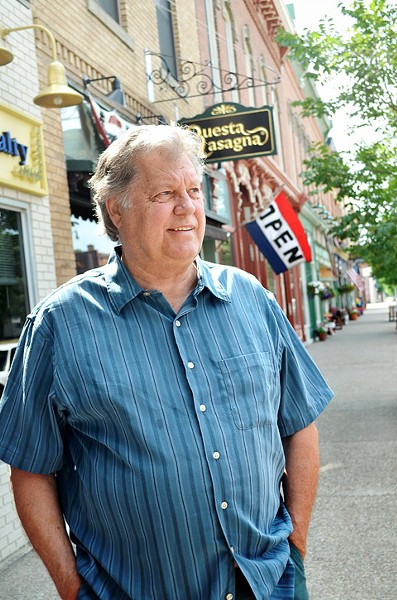 Village merchants have adopted a patriotic theme in honor of Francis Bellamy, author of the Pledge of Allegiance, who was born in Mt. Morris. PHOTO BY MATT DETURCK

Mt. Morris is no stranger to hard times. The "Best Town by a Dam Site" was once a thriving community with retail shops, restaurants, and its own movie theater. But by the 1990's, Mt. Morris, like many small towns in Western New York, was gripped by a slow, steady decline. Main Street had so many empty storefronts that Christmas decorations were placed in the windows during the holidays so the village wouldn't look so depressed, says one shopkeeper.

But faux displays shouldn't be needed this year. Mt. Morris, about 30 miles south of Rochester with a population of about 3,500, is undergoing a startling transformation. Quaint cafes and gift and antique shops line Main Street. Locals and visitors are browsing and buying again. And much of the change is being credited to developer and retired New York City detective Greg O'Connell.

It might seem like O'Connell appeared suddenly like a benevolent godfather. But he says he was familiar with the area long before he began investing in Mt. Morris's Main Street three years ago. O'Connell graduated from SUNY Geneseo in the late 1960's, and he owns a home on Geneseo-Avon Road.

It was prodding from a close friend that stirred his instinct for real estate development, he says.

"It was nothing that I planned," O'Connell says. But after sitting down with longtime Geneseo merchant Louise Wadsworth, O'Connell says he was sold on the town's potential.

"She's like Miss Main Street," he says. "You know how people have photo albums of their family and kids? Well, Louise had photo albums of Main Street [Mt. Morris], each individual store, and the history of who owned the building. I had never seen anything like it."

O'Connell proceeded to discretely purchase 20 buildings on Main Street, most of them vacant. The owners of 13 of the buildings were behind in their taxes. Some buildings were purchased through public auctions, and at least one was bank-owned by the time O'Connell closed on the sale.

"To reach that point, you know that just about all of them were in poor condition," he says.

O'Connell says the reactions to his buying up Mt. Morris's Main Street went from "You're crazy" to "How can we help?"

"We went for eight years without a supermarket," says Jane Oakes, owner of Jane's Pantry and one of O'Connell's tenants. "For those of us who remember the pre-I-390 days, it was just sad to see the businesses disappear. They just went away because people drove right by us. Now we have reasons for people to come here. We've gone from moribund to more fun."

Oakes, who calls herself the "Queen of Licorice of Western New York," carries more than 60 varieties of the chewy goodies in a store packed to the ceiling with rare and unusual food items.

Like other shop owners, Oakes says she gets a fair number of people remarking on how lovely the town looks, with some even inquiring about living there.

"It's candy land for houses down here with beautiful homes at unbelievable prices," she says.

It was O'Connell's investments and foresight that helped Mt. Morris move out of intensive care, she says.

"I don't think you would see this amount of revitalization without him," Oakes says.

From the sheen of its wood floors to the neatly dressed tables and light jazz playing in the background, Questa Lasagna is easily pictured alongside eateries on Rochester's Park Avenue. Owner Tim Knowles opened the restaurant about two years ago, and he was one of O'Connell's first tenants. He says opening a restaurant has always been risky, but it's more so today because the business has become much more expensive to operate.

But Knowles is optimistic. He says he knows he's got a good product and customers are finding him. More than 800,000 people go to Letchworth State Park in the summer and fall months, with 60 percent driving right through Mt. Morris, he says. Between SUNY Geneseo and the park, Mt. Morris can attract a viable customer base, Knowles says.

"People take this route going up to Buffalo, Niagara Falls, and Toronto and they're from all over," he says. "I had a table full of people visiting from Ireland yesterday."

Even when buildings are purchased well below market value, there are still challenges for a developer — a fact O'Connell knows well. He began investing in real estate decades ago when he bought rundown and crime-ridden waterfront property in Brooklyn. His Red Hook properties now house dozens of small shops, offices, and restaurants.

"Really early on I identified the fact that there was no good tax abatement system set up in these villages like we have in New York City," he says. So he worked with Livingston County and village officials to create one.

"What I say to government officials is this, 'If you don't have the money to give to property owners to help them fix up the property, at least give them a tax abatement,'" O'Connell says. "Otherwise, what's the incentive?"

The program allows for a gradual increase in taxes on the improvements over a 12-year period, and the community selects the area to be developed, says Patrick Rountree, Livingston County's director of economic development.

"It's all about keeping the rents lower for a longer period of time," Rountree says.

But it isn't just about low rents. In addition to filling his empty storefronts with tenants, O'Connell also had to fill the apartments on the upper floors. Most of the apartments were vacant and needed complete renovation, he says.

And O'Connell had to help small business owners learn to market themselves. He turned to SUNY Geneseo for help. The college's students have been involved in everything from beautification projects to publicity about community events to arts activities.

But is Mt. Morris's revitalization a fluke or can it be replicated in other dying rural communities? O'Connell says he gets that question all the time, and he receives invitations to speak about it from business groups around the country.

"Every community has its personality and its assets," he says. "That's true of big cities and small towns. There's not much difference between urban and rural [development]. In Red Hook it was about bringing the community together, listening to what their needs were, and identifying the assets of the community. Same thing here."

O'Connell has begun working on another community in Livingston County that has faced hard times. He bought a building on Main Street in Dansville, and he's looking at other nearby towns for similar opportunities.

"The villages and counties across Western New York are no different than those all across America," he says. "The people who live here want to take their Main Streets back. How do we do that?"