March 26, 2018
Good Monday morning. Here's our weekly look at what we'll be up to over the next few days.

The early part of the week is likely to be dominated by news about filling Louise Slaughter's seat in Congress. Slaughter may have been 88 years old, but she was not ready to retire and was planning her campaign for the November election. 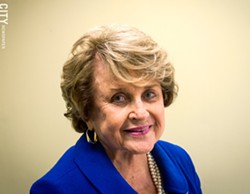 Slaughter's popularity, personal strength, and campaign funds made her seat a likely safe one for Democrats. And while there were occasional long-shot Democratic challengers, no one ever really had much of a chance. With her death on March 16, though, that all changed – dramatically.

The Republicans have what looks like a strong candidate ready to go in the person of James Maxwell, chief of neurosurgery at Rochester General. State Senator Joe Robach had considered challenging Maxwell, but decided not to. So it looks like Republicans will avoid having to dilute funds and message with a primary.

Not so, apparently, with the Democrats. State Assembly member Joe Morelle is announcing his run this morning, and we'll be posting a report from that press conference soon.

A newcomer, Andrew Gilchrist, has also said he wants to run, and at least two other Democrats are considering running: Brighton Town Board member Robin Wilt and former television reporter Rachel Barnhart.

And WXXI reported this morning that School Board President Van White is considering a run.

Outside of politics: In print and online in CITY this week, we have an interview with a particularly interesting person, Ken Morris Jr., a descendant of both Frederick Douglass and Booker T. Washington. The topic: Morris's involvement in efforts to stop human trafficking.

And we have a feature on several local performance groups that are working to provide "sensory friendly experiences" – performances that are inclusive for children and adults who are on the autism spectrum, have ADHD, and have special needs.