The mayor and the schools: who’s in charge? 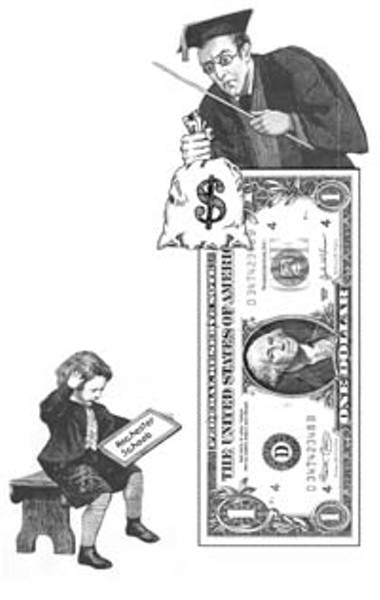 Elections are about the future, and the Rochester school district may be a mirror of the city today, and what it could become. Shrinking enrollment --- shrinking job market. Low test scores --- low-paying jobs. High dropout rate --- high crime rate.

It's not just Rochester. All across the country, cities with large urban school districts wrestle with the same challenges: tight finances, failing grades --- and tensions over school leadership.

In the Democratic primary campaign, each of the candidates says education is a high priority. But school board members, not Rochester's mayor, are elected to oversee the school district. They hire the school superintendent and set policy for the district. And neither the board nor the superintendent reports to City Hall. Unless the state legislature gives the mayor control over the school district --- which has been suggested --- what can the mayor do for students and parents?

The answer: provide money. The mayor recommends how much money the city will take from its own budget and give to the school district.

"I've learned it's not as easy to make changes in education as I had hoped," says Rochester's outgoing mayor, Bill Johnson. "I campaigned on improving education with an emphasis on more financial accountability. We made some strong proposals. But let me just say that the school system has some strong opposition from those who want to keep the status quo. What they have always managed to do well is make a compelling case for getting more money. The new mayor is going to hear the same thing -- more money."

The plea for increased spending has created deep divisions. Rochester school district has been facing a tsunami of poverty for decades. The city's students are among the neediest in the state and the 11th poorest in the nation. Eighteen percent of them, 1in 5, live in extreme poverty, with families trying to get by on less than $9, 000 annually. And 78 percent of them qualify for free or reduced-price meals.

"It is a fact that all of the large urban and rural districts with poverty levels over 80 percent have too-high drop out rates and too-low performance on standardized tests," says a spokesperson for the school district.

A May 2005 report by State Comptroller Alan G. Hevesi links the problems of New York's large-city school districts to the financial struggles of those cities and their declining property tax base. Hevesi's report said that Rochester's school district needed another $8.3 million in state aid to meet its 2004-2005 budget needs.

And of the school district's $500 million annual budget, a large portion is skimmed off the top for hard costs the district cannot control. More than $44 million pays for city children who attend private, parochial, and charter schools. Another $94.8 million pays for mandated special-education services, with $23.6 million of it financing services for city children who don't attend the district's schools. Then there's the cost of pensions, an aging infrastructure (the average age of city schools is 44 years), and the rising cost of energy.

"The district is close to spending $11,000 per student, and the question is: What is the mayor's role? What can the city do to eliminate the conditions of poverty that make it increasingly more difficult for kids to learn?" says Johnson. "We've tried eliminating vacant housing in some of these neighborhoods. And we are now focused on lead paint, but between the two we are now surpassing the cost of new housing production in the city. There's only so much money available, so how do you spend it fairly and get the most bang for your buck?"

Some mayors, including Johnson, have become so frustrated with their districts' low student achievement that they have proposed having the superintendent report directly to them rather than to school boards. And mayoral candidate Wade Norwood wants that change.

Chicago, Detroit, Cleveland and New York City, all have mayors who not only sign the checks for their school districts, but control how the budgets are spent. And they hire and fire school superintendents. Yet there is not a lot of evidence that the mayor-as-manager style of running school systems is any better at raising student achievement.

In a two-part series on New York's school reform under Mayor Harold Bloomberg, Village Voice reporter Wayne Barrett gave the good and bad on the mayor's progress to date. Bloomberg and his school chancellor Joel Klein have forced more change on the nation's largest school system than at any time since the late '60s. At the same time, some of these reforms have led to an "impossible maze of conflicting authority," writes Barrett. Expecting Bloomberg to train principals and support teacher creativity while managing one of the largest cities in the world in middle of a war on terror seems naïve, writes Barrett.

"There are some examples of success in cities where they have agreed to have their mayors appoint the school superintendent and appoint the school board, like Chicago," says Patricia Malgieri, president of the Center for Governmental Research.

But CGR, which has been an outspoken critic of the school district, isn't pressing for such a change. "Our biggest concern is the real need for relentless focus from the top down on performance --- student attendance, improving results on state tests, and increasing graduation rates --- not how to evaluate another superintendent," says Malgieri.

"Trying to get a change like that through the New York State legislature will be a total diversion," she says. "It could take months, even years." And, she says, the district has made progress under Superintendent Manuel Rivera.

"But while we're making improvements, our competition is improving, too," says Malgieri. "We talk with companies every day that are looking at where to build their next plant. Are they going to build here with a workforce that can't read? Or will they take it to Ireland?"

"The possibility of reporting to the new mayor is not something I am very concerned about right now," says School Superintendent Manuel Rivera. "I wouldn't even want to speculate on it. There's an up side and a down side to every management style."

Having superintendents report to mayors is "a bit of a trend," says Rivera, "but look: There are no quick fixes. The bottom line is improvement in instruction, achievement, and graduation rates. The accountability for that is squarely with me."

"I also think that the mayor does play a crucial role in fostering public support and involvement," adds Rivera. "The mayor is in the best position to lobby the community of behalf of students."

Mayors and school superintendents are bound to each other in a unique relationship. Rochester's voters may need to decide whether the next mayor would make a better manager of the school district, on top of all the other responsibilities that comes with the office; or whether they want the next mayor to focus on the conditions that have driven poverty into the schoolyard --- such as chronic unemployment, unaffordable housing, and crime-ridden neighborhoods.