Kings of the new frontier 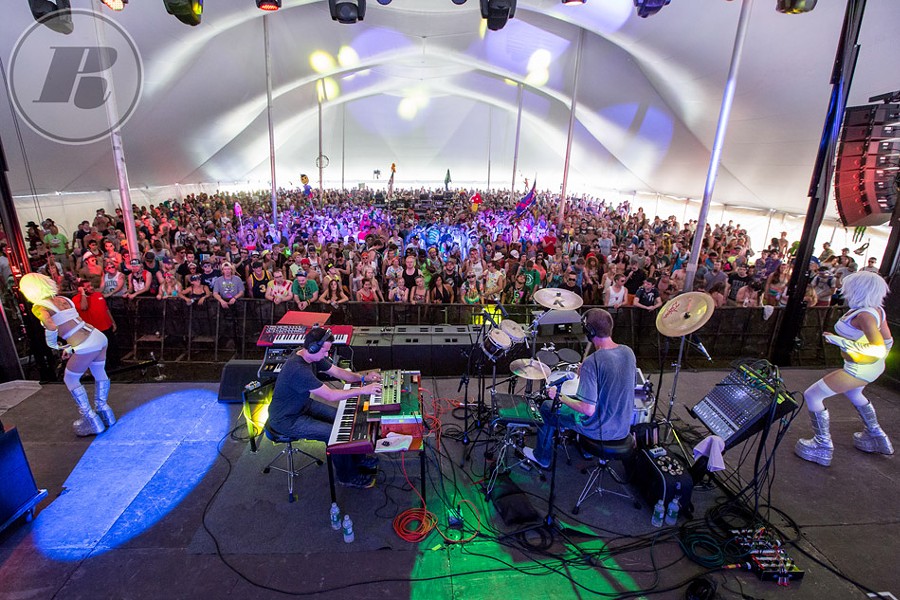 Rochester-based electronic sensation The Manhattan Project is more of an experience than a band, a re-defining of gravity. The duo — Shawn Drogan (drums and electronics) and Charlie Lindner (keyboards and synth) — creates a swirling, pulsating electronic universe without losing sight of the humans that dig it, or the humans behind it.

Live, the huge crowds The Manhattan Project draws only fuel the frenzy further, like a sort of non-stop electronic cabaret. Both Drogan and Lindner bring the beat to their fans, fans that are growing in numbers across the United States. They are road dogs, having just recently returned from a four-week turn-and-burn tour that took them down the East Coast and as far west as Colorado.

Drogan dropped in after a month of hopping in the van to discuss the human vs. electronic paradigm, the importance of acknowledging your rock roots and identity, and the thrill of new frontiers. An edited transcript of the discussion follows.

CITY: The Manhattan Project: how, why, and when?

Shawn Drogan: The Manhattan Project started roughly five years ago. Charlie and I were just looking for something new to do musically. We just put out our third disc and a live compilation. We're looking forward to doing a full-length next.

Musically, where did you come from? What's in there

A little bit of everything: jam bands, blues [Drogan spent time drumming with Liqwid, Space Agency, Macro Meltdown, The Move, Chris Beard]. Really when it all began, we were doing these coffeehouse gigs as a jazz duo, improvising, but we wanted to go into more structured songwriting, which is something we were strong at early on. So this provided a new challenge, I guess. We just wanted to do something new. I think after 15 to 20 years of playing a certain style of music I guess we wanted to venture into something new and challenging.

Challenging because it was vastly different?

Challenging because it was new. New sounds we had never explored before, new techniques, trying to write a good four and a half minute song, instead of relying on a jam, instead of the opposite, something a little more meaningful to us. It's been a huge challenge. We've both become better songwriters in the process. It has been fun for us individually as musicians and as a collaborative team.

Is it difficult being a human in the machine?

I think it allows a breath in there, that humanistic quality. We're not perfect. I'm not a perfect drummer. There is that fluctuation, that feel you may not get from a loop or a drum machine. I may be playing over a loop or with a loop, but depending on the night, it'll be a little different. I may be pushing it here, a little more energy there, an accent... I think that's fun for people.

Is it difficult to sync up the human imperfection with the electronic perfection?

It really depends on the song. Every song is a little bit different. We're not using any computers on stage in our live performance, so a lot relies on practice and rehearsal to get it right.

What happens if you have an electronic glitch?

We were more nervous earlier on and had some experiences like that. You learn to roll with it. Sometimes it ends up better and leads to a new place you never expected. It keeps us on our toes for sure. It has to be done right.

What new frontiers do you tackle with each new recording?

The first one was a self-produced effort. It was something to launch the project and get it out there. The second one we worked with Sam Polizzi at GFI. We wanted something sonically much greater than our first one — bigger, higher quality. With this new one, because of our schedule with touring, we only had a small window of time to go in and record. And we went in with songs that maybe were just ideas or half done, or just grooves and beats. It was a new process for us to use the studio to complete these pieces. The only thing we really wanted with this one was to be different from the last, take it into new areas and explore. The tempos on this one are slower, half time.

Despite the Manhattan Project sound, you guys still come off as rockers in a digital realm.

No matter how hard we try we can't get away from the years and years of influence and inspiration we've gotten from all sorts of styles of music. And you can never force anything. We're pretty free to do whatever we want. We allow the instrumentation to kind of shape our sound. A song can be anything as long as it connects with somebody or moves them in a certain way. It doesn't matter what style of genre it ultimately falls into.