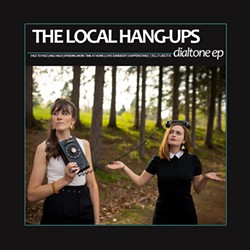 In listening to the debut EP “Dialtone,” self-released on May 7 by Rochester acoustic pop duo The Local Hang-Ups, it’s nearly impossible to separate the heartfelt original songs of Abbey Sitterley and Katy Martin from the era of isolation and missed connections brought on by the pandemic.

The duo formed just before COVID-19, and as a result, developed its intimate, harmony-driven sound without the aid of in-person performances. Instead, Sitterley and Martin performed a series of charming cover songs in their “Tuesday Sessions” on Instagram and quietly crafted their own tunes together in quarantine.


Each creation on the EP (available on Spotify and Bandcamp) is imbued with a wistfulness intensified by physical and emotional distance, and the desire to establish meaningful bonds in a time of separation is palpable and urgent. The opening track “Face to Face” expresses a willingness to mend a friendship despite polarizing perspectives that have kept two people apart. The band’s first single “Love Somebody” is a straightforward pop tune with soulful touches, celebrating love’s ability to transcend the limitations of words. “Happenstance” is a poignant alternative folk-pop concoction about the entanglements of unrequited love, and perhaps the most sparkling example of the impeccably smooth synergy between Sitterley and Martin’s voices.