The late Robert Marx, and the faces in the mirror 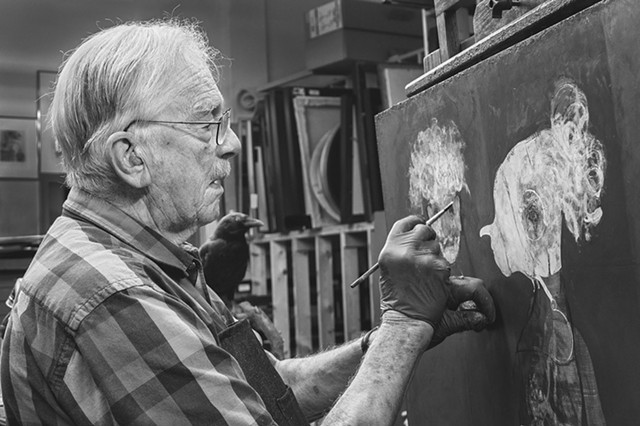 As best as Francie Marx can reassemble the story after more than seven decades, Robert Marx was 19 years old, serving in the U.S. Army Air Force as a military policeman somewhere in Europe. World War II had just ended, and he was assigned to sit outside the cell of a prisoner. Francie recalls Robert describing him as “a pathological killer.”

“And if the guy wanted a cigarette, Robert would light one, put it on the floor, push it forward with his foot,” Francie says. “This guy could then smoke the cigarette.”

And after who knows how many cigarettes were nudged along by the toe of Marx’s boot – from one side of the cell door, freedom, to the other side of the door, imprisonment – the jailers took the man from the cell and hung him.

“You’ve gotta understand, I get this in pieces,” Francie Marx says of her husband. “And I try to put it together, and I have moderate luck.”

In pieces is the only way you will get the story of artist Robert Marx. Jessie Marx says she never heard her father talking about slipping cigarettes to a condemned man. But she, as well as seemingly everyone who knew Marx, does not find that silence surprising.

“Dad didn’t really talk too much about all that,” Jessie says. “I really don’t know, he was very quiet.

Robert Marx’s work has been shown in the National Gallery of Art in Washington, D.C., and the Metropolitan Museum of Art in New York City. And Rochester Contemporary Art Center. The Memorial Art Gallery has a few of his pieces as well. 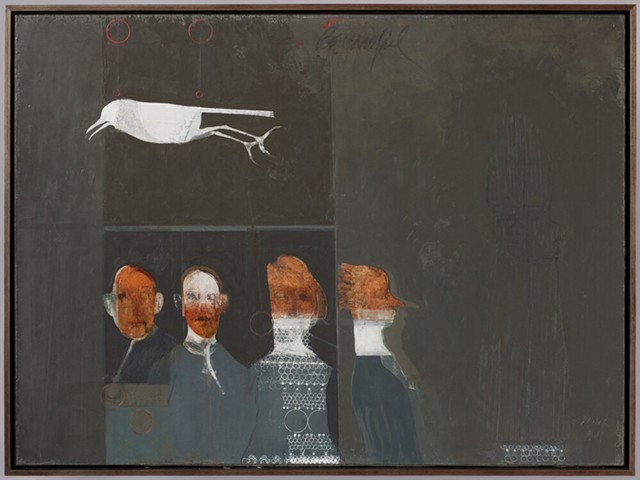 For the last 26 years of his life, Robert Ernst Marx lived quietly on Nunda Boulevard in Rochester, creating right up until he died last week at age 94, after having completed the final pieces for a show of his prints and paintings and sculptures that opens Dec. 12 at Main Street Arts in Clifton Springs.

Here’s another piece of Marx’s story, as told by Francie. Released from military service, Marx took a year-long bicycle ride through Europe. Into the bombed-out cities of his native Germany. Searching for relatives, including in the town of Northeim, where he was born.

“He walked on the rubble, and the first thing out of his family there was, ‘Did you bomb us?’” Francie says.

The man’s family was asking if this relative — who they hadn’t seen since he was two years old, when his parents had taken him to America — was responsible for destroying their cities.

Do any of these anecdotes explain the unrelenting darkness of Robert Marx’s art?

How about the story he was told while in Germany of his 15-year-old cousin, killed while trying to attack an American tank? Or did Marx come to this dark place as a man who watched his first wife die of cancer?

Yet here’s the dichotomy of Robert Marx:

“I was at a show,” Jessie says, lowering her voice to a conspiratorial whisper for a moment. “I can’t remember where we were. And this lady came up and she’s looking at the paintings, she goes, ‘Ohhh, such dark paintings for such a happy man!’”

Like Marx, Rochester artist Richard Harvey had a studio in the Anderson Arts Building, off Goodman Street. “I said one time, I says, ‘People think my work is pretty much close to your work,’” Harvey says. “And he looked it over and goes, ‘No.’ He was a man of few words, but the few words were always so powerful that you didn’t need to carry on a lengthy conversation.”

Harvey calls Marx a worldly man, and he describes Marx’s art as “deep.” But again, what’s behind it, and why is it so dark?

Everyone who knew Marx seems to agree that he didn’t talk much about his past. Not that anyone suspects he had something to hide. And sometimes the recollections of friends and family don’t quite line up after all this time. Biographies of Marx in catalogs for the shows he did over the years, and in the galleries that sold his works, are sparse in detail.

He was born in Germany in 1925, although some sources say it was a year earlier. Jessie says her grandparents fled the country with their two children not only because of the bad economy, but because of the rise of the Brownshirts, the violent paramilitary group that was supporting Hitler. First stop, Ellis Island. And then, Francie says, Muncie, Indiana.

But the biographies generally skip those years, picking up with Marx as he earns a master’s degree from the University of Illinois, then teaching at Syracuse University and later at The College at Brockport, State University of New York.

One biographical document we can turn to is Marx’s art. Self-expression that evolved over time. Early paintings were abstracts, before he drifted into human figurative works. Etchings, in a process called aquatint, where acid is used to create different levels of surfaces to hold the ink.

Human heads, human bodies. All of them anguished, ghostly, distorted faces with soulless eyes. Symbolism abounds in detached arms and heads. The figures sometimes seem to be religious in nature, perhaps wearing a bishop’s mitre, or some other accessory suggesting corrupt authoritarianism. Groups of figures are distant from each other, even though they share the same canvas. And virtually everything is rendered in shades of gray, brown, and black.

The tortured faces project the same feeling of alienation as paintings by Francis Bacon. They are contemporary visions of the hellish, sin-consumed, swarming subjects of the 15th-century Dutch artist Hieronymus Bosch. Except Marx leaves the background blank, and limits the population, so that the viewer has no choice but to look into the face of who we are. 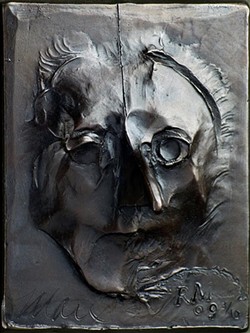 Similarly, Marx’s sculptures are broken expressions, heavily textured, as though he had pushed his thumb into the wax form he was working with and left the impression there, before casting it in bronze. Faces with uneven noses and empty eye sockets stare out from a piece called “An Eye For An Eye Makes the Whole World Blind.”

That seems to be an overarching theme.

“Peripatetic” is a word Francie uses to describe Marx. He was studying architecture at the University of Illinois, working summers as a surveyor or building houses, laboring in the hot sun until the skin on his back was so burnt he couldn’t put on a shirt, Francie says.

An inability to master calculus derailed Marx’s early architecture ambitions, Francie says. But friends noted that he drew well. So art it was.

“That’s when our paths crossed,” Francie says. Sort of. They lived on the same street, yet never met, but they were already sharing the same thoughts. “We had to vote against Barry Goldwater.”

Marx moved on to Vestal, New York, where he taught at Harpur College of Arts and Sciences at Binghamton University from 1966 to ’68. Then Boston until 1970, until he was fired from his job at a bookbinding business. But The College at Brockport quickly picked him up, and there Marx finally settled down. He taught at Brockport for 20 years.

He and his wife Betty were married for 32 years and had five kids. While he taught at Brockport, they lived on five acres in Hamlin, along with a cow and goats. And horses, at one time nine of them, which sometimes pulled the old carriages that Marx liked to restore. Sometimes his students would visit, and Betty made them lunch.

Then in 1982, the cancer took her. Marx sold everything and moved into a Brockport apartment.

Francie had married as well, in 1959. Twenty years later “is when things crumbled,” she says. Her lawyer husband ran off with his paralegal, and Francie was unemployed with three kids and a house that had to be paid for. She found a job as a fundraiser at Brockport. And it was there, in 1983 at the top of the stairs in the college’s Tower Arts Building, “the lightning struck,” Francie says.

Robert Marx. She admired his industriousness. She watched him cut up a tree for firewood. He baked bread on Fridays. They married a year after they met, and he moved into her house on Nunda Boulevard.

Industriousness is what defined Marx. He had a studio in the Anderson Arts Building, a bastion of artists and creativity. Marx started out on the top floor. “He was a professional artist, and that meant a certain lifestyle to him,” says his longtime friend and former gallery owner, Shirley Dawson. “It was a dedication, he reported to work and he worked every day.”

Over time, he eased his way from the fourth floor down to the second, because the stairs were getting a bit much. A few years ago, he moved the studio into the basement of the house on Nunda.

When Marx’s art gathers in one place, it can tell you who he was. Marx did a gallery showing in Atlanta, called “Robert Ernst Marx: arrogance of power.” Marx eventually sued the gallery owner for selling the art at a higher price than he told Marx it went for, and keeping the extra cash.

“It took its toll, I think, on Robert and everybody and his wife Francie, because it was a nasty, draining, bitter fight,” Dawson says. “They won the suit, but so what?”

For Marx, the fight was never ending. He sometimes had 25 paintings in his studio, oils on linen, all in different stages of life.

“One of his paintings, he said he had started 20 years ago and he was still scraping and sanding,” Dawson says. The precise painterly effect he was seeking was a different mindset from the prints, which he would pull from the plate and discover an irregularity in the ink. He liked that. He called these accidents of art “gifts.”

Here is a description of Marx’s work from a catalog for a showing of his art at a Seattle gallery:

Robert Marx has constructed his career on a foundation of social, political, and psychological observation, using caricature and allegory to explore humanity’s baser side, as well as its innocence: the arrogant statesman and the indifferent clerics verses the wounded, the fragile, and the confused. 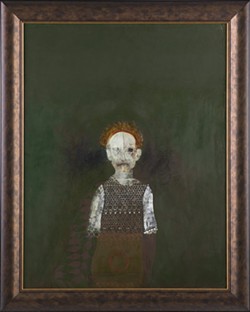 As usual, there is no biographical information to be found. But in the same catalog, Marx tells you all he believes you need to know:

I am troubled by the arrogance of power, the exclusivity of the institutions of church and state, abuse by and of both spouse and child, and our own and others’ personal fears and insecurities. We are also to some degree trapped by conventions we impose upon ourselves. While painful to express, these themes desperately need expression, and I do it visually.

Robert Marx always said that his art is not portraits of specific people. Jessie Marx offers another suggestion. Perhaps they are self-portraits, a reflection of a man Marx did not want to be.