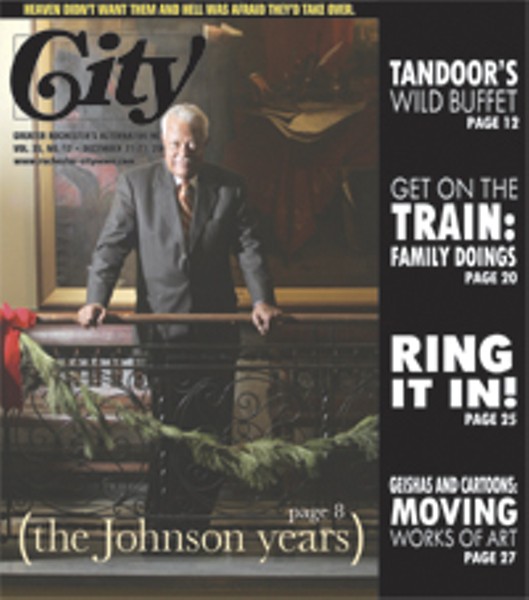 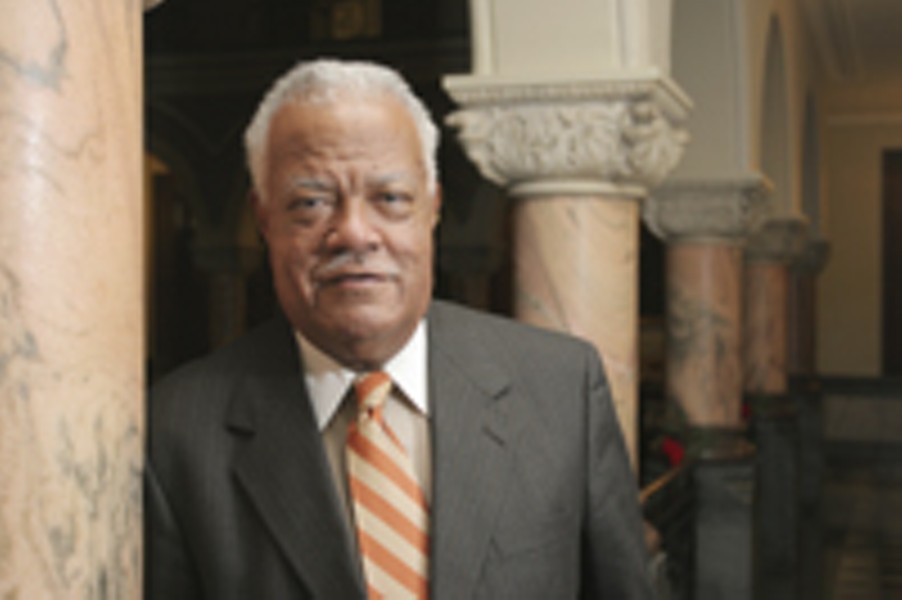 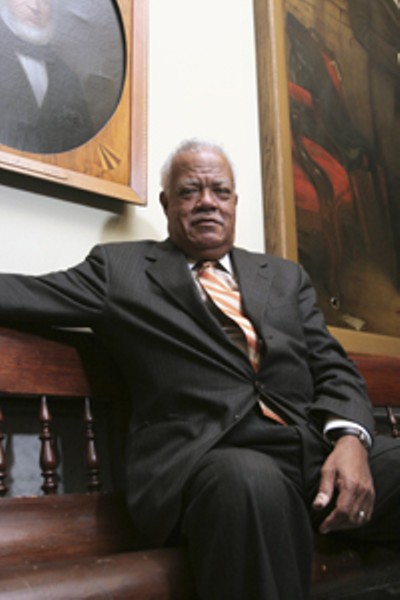 Bill Johnson came to office in 1993 as an outsider, an Urban League CEO who had been highly visible but had no political experience. In a Democratic Primary upset, he defeated four candidates, two of them well-known politicians with powerful backing: County Legislator Kevin Murray and former City Councilmember Ruth Scott.

He said when he was first elected that he did not want a career in politics, that he intended to serve two terms at most, perhaps only one. He stayed on, though, and in his 12 years as mayor, he has been aggressive, energetic, complex, and controversial, his vision and his impatience aimed at the wide variety of challenges facing the city.

He launched an anti-racism project and a music festival, pushed for business and housing development in the inner city, fought graffiti, started a downtown shuttle service, tried to create an entertainment district in the HighFalls, approved having the city take ownership of an enormous ferry, and lectured anyone who would listen on the need for regional planning.

Bold and willing to take risks in this risk-averse community, he has been outspoken and persistent, shrugging off criticism when he thought he was right. He fought the county's plan to expand parking for the zoo in SenecaPark. He refused to approve a new Wegmans store on Elmwood Avenue --- and chastised the supermarket chain for closing down some of its older city stores.

A frequent critic of the Rochester school district, he urged the state to give mayors more control over their districts, one year putting together his own slate of School Board candidates, another cutting funding for the district. His dissatisfaction with former Superintendent Cliff Janey's fiscal management helped lead to Janey's resignation, and he lashed out at the School Board for the severance package it gave Janey.

He is accused of clinging to the ferry because he wants it to be his legacy. But asked what he's proudest of, he talks about something that might be considered more mundane: increasing the public's participation in government.

To update the city's master plan, he and his community-development staff started not by planning inside City Hall but by dividing the city into 10 sectors and fostering the birth of a citizen group in each one. Members of the sector committees spent months discussing what they wanted their neighborhood to become and what problems they wanted the city to help them overcome. The resulting document was called the Renaissance 2010 Plan, and Johnson has incorporated the word "renaissance" as often as he could in his programs.

When, in an interview earlier this month, he brought up the gap between the haves and the have-nots, he was talking not about economic disparity but about power. Corporate CEO's, he has said, were used to running the show, not sitting down and talking with ordinary citizens, and Johnson looked for ways to foster that dialogue.

In his effort to reduce racism, he brought together a wide variety of residents from throughout the county: government officials, business executives, social-service leaders, media representatives, and city residents. The goal: for them to get to know each other personally, across race and class barriers. He created a Stewardship Council, with similar representation, to help guide the implementation of the 2010 Plan.

Johnson has been controversial, but he has also been respected by many. He is impatient and has high standards but is fiercely loyal to his staff. One city official describes him as a good executive who is willing to hear bad news, willing to listen to challenges to his own ideas, someone who can listen to many different viewpoints and then make tough decisions.

One achievement that is too little appreciated is maintaining the city's fiscal health. Both Johnson and his predecessor, Tom Ryan, ran tight operations --- managing, despite the eroding tax base, to keep the city's credit rating high, the highest of any New York city. And despite tight budgets, Johnson's administration has continued to offer expensive quality-of-life services for city residents: plowing sidewalks, picking up leaves in the fall, scrubbing graffiti off of walls and lampposts. During the budget planning one year, Johnson says, he and other officials considered cutting back refuse pick-up to twice a month. Concerned about the impact that would have on the quality of city neighborhoods, they dropped the idea.

Under Johnson, the city has offered classes to teach children computer skills; programs to reach out to at-risk young people, to try to keep them from turning to crime; youth summits; fireworks downtown; garage sales and sleigh rides at the public market.

Johnson has also fostered some small steps toward more metropolitan cooperation, and the city now provides services to several suburban towns: zoning reviews for Gates, for instance, and electrical inspections for Brighton.

Johnson did not createRochester's problems, many of which have worsened. The city's tax base continues to decline, but the demand for services does not. Violent crime spiked this year. New housing and commercial development in the suburbs continues to eat away at the city's strength.

But during the Johnson years, there have been success stories as well. While business declined on Main Street downtown, Rochester got a new library, a renovated War Memorial, and a new Bausch & Lomb headquarters building.

Development of market-rate housing --- crucial to downtown's future --- is intensifying, signaling optimism about the city's future. And under Johnson, the city has built 400 units of new, inexpensive housing and renovated more than 2000 vacant houses and sold them to moderate-income Rochesterians.

Despite substantial public investment, however, Johnson's administration hasn't been able to create an entertainment district at the HighFalls. He didn't develop the contacts with corporate CEO's that his predecessor did, and he has sometimes seemed disdainful of the business community. Small-business owners in particular have complained that his administration has obstructed development rather than fostering it.

During much of his term, his counterpart in county government was Jack Doyle, who has as strong a personality as he does, and his public battles with Doyle often overshadowed the issues they were fighting about. Johnson has said, sometimes, that their squabbles were blown out of proportion, that the two were often able to work together. But the public perception was that they fought constantly, that both men were at fault, and that their disagreements got in the way of community progress.

Johnson's gamble on the ferry will certainly color his record, at least in the near term. It was a gamble that many Rochesterians initially applauded, but the enthusiasm waning. In part that's because of start-up problems, but it's also because of City Hall's reluctance to discuss the ferry's finances openly. And because some of the start-up problems probably could have been avoided. And because there is the perception that city officials with little background in business operations made poor judgments, in budgeting for the ferry and in dealing with the ferry's previous owners and their spin-off company, Maplestar.

Johnson's legacy will also include his unsuccessful run for county executive. He lost that bitter race in large part because of his long-time stand favoring some form of metropolitan government. Earlier in his administration, he developed a series of speeches focusing on the serious impact suburban sprawl is having in the region, and he gave those talks in the city and the suburbs. He hosted talks by mayors and other officials from regions that have metropolitan government.

In the campaign for county executive, he emphasized that there'd be no metropolitan government unless the public voted for it, that the county executive doesn't have the power to impose it. But the Republicans hammered away at him, running ads showing Pac-Man-like figures gobbling up suburban towns.

Some metro supporters criticize him for entering the race, saying that he has killed any chance that Greater Rochester will move toward metro government. But had Johnson not run for county executive, metro would not have been an issue in that campaign.

Would that have been better? Perhaps. Metro wasn't a major issue in this year's mayoral campaign either, though, and no issue is more critical to the health of the city --- and the region. If Johnson hadn't made it an issue during his years as mayor, would any political leader have done so?

As he leaves office, Johnson is still talking about the need for regionalism, in MonroeCounty and beyond. Buffalo, Syracuse, and Rochester must work together to attract new business, he said in a recent interview with City. It is, he said, "the only way we are going to save Upstate."

He doesn't plan to stop pushing for metropolitan approaches he moves into his next job, teaching at RIT, where he hopes to create a research institute to study land use, governance, educational equity, and similar issues.

He says he'd like to create models that governments can use --- maybe talk about how governments in the six-county region can support things like the War Memorial... and the ferry: institutions and projects that benefit the region. Maybe, he says, he'll "then sit down with people like Maggie and say: 'Look, here's your plan. Take it. You run with it, but here's a way to do it."

Regionalism, metropolitan planning, he is "unavoidable."

To read a Q&A with the mayor: Click here!