The internet fills the void

April 16, 2020
As a percussionist, Marty York is all washed up. On Monday evening, he was banging on the washing machine at his home, pounding out a rhythm, whacking a cowbell.

This is music in the age of coronavirus. Musicians confined to their homes, stripped of creative connections, driven to abusing large appliances. York is the drummer with Watkins & the Rapiers, a Rochester band stripped of its Monday-night residency at The Little Café.

So it turned to the internet, playing live, each of the six musicians performing from the safety and comfort of their own homes. Watkins & the Rapiers is a band overstuffed with singer-songwriters, including WRUR-FM (88.5) morning DJ Scott Regan.

Each took his turn to offer a song. Solo, before the virtual concert reverted between songs to the band's usual comforting, gag-filled banter. Then the final song, when about three of them tried to sync up and play together. A train wreck, as I suspect those anarchists hiding in artist garb hoped it would be.

While surfing through the cloud this week, I saw both live and prerecorded posts from Rochester musicians, watch parties for movies and TV shows, and a woman from New York City wearing a bikini as she baked bread. As I'm typing this, I'm also enjoying guitar fingerpicker Dakota Dave Hull playing Jimmie Rodgers's "Mississippi Delta Blues," live from what looks like his Minneapolis basement. Or maybe he lives in a bomb shelter. Hard to tell these days.

As is often the case, Hull has posted a couple of sites where viewers can contribute a few dollars. A virtual tip jar. Their gigs have dried up. We can't let our musicians starve.

It's not as energizing as being in a club, hearing live music. But these are the chords we've been dealt in this season of coronavirus. The arts, scattered all across the internet. So to help out a little, and maybe keep the arts alive, we're collecting listings of your virtual events, and adding them to the calendar produced by our media partner, CITY Newspaper. It's free. Just email calendar@rochester-citynews.org. You'll find these events under the big, yellow "The Beat Goes On" icon.

And there’s this: Thursday evening, we unleashed to the internet a weekly posting called "HomeStage." Its debut features the Rochester icon John Dady. We're asking local musicians to record a live performance for us. And we'll pop in a few extra treats. Stay tuned. We'll start small. But soon, you'll be scheduling your life around this stuff.

The music venues are dark. The record stores are closed. Lady Gaga, Alicia Keys and Willie Nelson have postponed the release of their new albums until the coronavirus all-clear klaxon sounds.

Into this vacuum rushes Harmonica Lewinski. The Rochester thrift-store surf outfit has not done much the conventional way over its career, starting with the complete absence of harmonica. Past releases have been issued on a long-dead format known as the "cassette tape." And perhaps the misspelling of Monica Lewinsky, White House intern of historical note, is intended to throw lawyers off the scent.

The five-some presses on in retro-cocktail, lo-fi spirit with the April 24 release of "Human BBQ," on the now-hip music medium of 10-inch vinyl.

The immediate urge is to throw these nine songs, of which only two barely creep over the three-minute mark, into the retro-cocktail, campy beach music bin. But there is also an irreverence to convention that brings to mind The Trashmen and "Surfin' Bird." 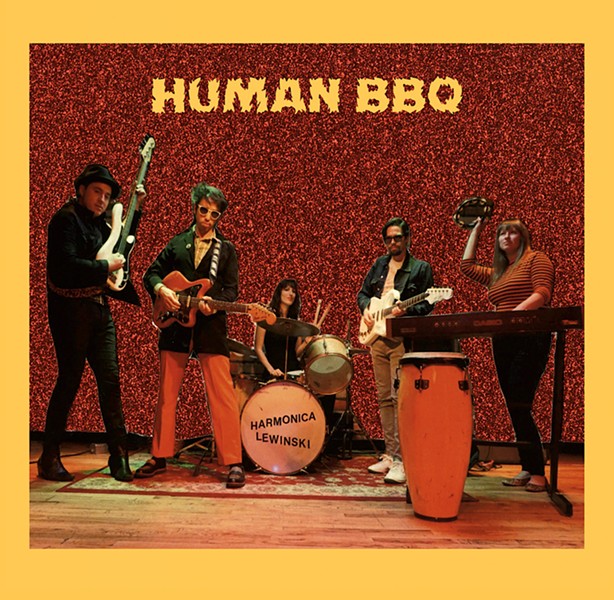 Yet Harmonica Lewinski is not reinventing the grass hut. "Human BBQ" runs deeper, darker. Perhaps it's the spooky organ. The tarantella of "What's Behind the Veil" and the threatening "Turf War" feel like they're meant for people who are looking for something groovy to dance to, but they're not quite right in the head. "Turf War" is, in fact, a David Lynch dance party.

Some of the tracks are instrumentals. And there are vocals, sinister-sounding things uttered by Joe Bushen, almost incomprehensible, echoing like train-station announcements. Yet they fit, it's part of the dream-like aura. "Dirt Nap" is a nighttime drive through a city you've never visited. Some moments approach a high bar of ghoulishness, the soundtrack from the old black-and-white, cult-favorite film, "Carnival of Souls."

Order "Human BBQ" — this is a suggestion, not a command — at harmonicalewinski.bandcamp.com.