The Hochstein School, 100 years in the making

March 31, 2020
Against the sobering backdrop of a coronavirus pandemic that has drastically impacted life in Rochester and around the globe, The Hochstein School has arrived at an historic milestone: 100 years of service to the local community. Originally founded to provide music education to underserved students who might not otherwise have access, the school’s mission has endured even as it has frequently had to shift its approach in ever-changing times.

Currently, the school’s physical doors are closed and many programs are suspended in response to COVID-19, but the instructors have adapted to teaching through online platforms. And the school plans an online celebration of the school’s centenary on April 5, the same date as the initial David Hochstein Memorial Concert back in 1919.

There have been many important moments in time that led to the school’s 100th birthday, and it all began with the legacy of one beloved Rochestarian.

April 5, 1919: A crowd gathered at the Convention Center — the building that we know as Geva Theatre today — to hear a concert played by Rochester's leading musicians. They were there to honor the memory of a young local musician, David Hochstein, who had died a few months earlier in the Battle of the Argonne Forest in France, as part of the First World War.

Hochstein had been the pride and joy of Rochester, and especially dear to one of the city's leading arts patrons, Emily Sibley Watson. About 13 years earlier, she had first heard his violin playing through an open window on Prince Street when she was out for a walk.

The Hochstein family lived across town on Joseph Avenue, where David's father Jacob (a highly educated Russian-Jewish immigrant who spoke six languages) ran a print shop out of their house and was his son's first violin teacher. David progressed quickly, and went on to study with professional musicians his father knew from the European immigrant community in Rochester. David was in the orchestra at East High, which is where he met his friend John Warner, who played the piano. It was through the window at Warner’s house where their musical dialogue was overheard by Watson, changing David's life.

Watson was inspired to support David's career as a musician. She funded his studies in Vienna, where he garnered prizes in several musical competitions, and he started to perform throughout Europe. He went abroad again to study in St. Petersburg, this time with the help of Watson’s good friend and fellow philanthropist George Eastman, who also obtained two instruments for David to play on: one by 18th-century violin maker Carlo Ferdinando Landolfi, the other a Stradivarius. Hochstein also made several recordings on 78s for the Emerson Record Company and played a recital at Carnegie Hall.

And then, the war came. David Hochstein was granted an exemption from serving, because he was his mother's sole support at the time, since his father had passed away. But he changed his mind, and applied to serve in the army anyway. One theory is that he was motivated to do something in contrast to his aunt, the famed anarchist and anti-war activist Emma Goldman, who had recently gone to jail for her protests.

David continued with music while serving in the army. He played in a military band and started a 21-piece orchestra at Camp Upton. He then went to fight on the front in Argonne and was killed in action in October 1918, though the news wasn't confirmed until months later.

January 4, 1920: The David Hochstein Music School Settlement opened in the Hochstein family home on Joseph Avenue, funded in part by the proceeds from the concert held the previous spring. By June of that first year, there were 330 students enrolled, with a waiting list of 110. Tuition was on a sliding scale, based on what families could afford.

The history of the school has been well-documented by Gary Palmer, Assistant Director and Dean of The Hochstein School, both in his 2010 PhD dissertation — “The Hochstein School of Music & Dance: History, Mission, and Vision” — and in stories that he shared in an interview earlier this year.

The school was founded as a “settlement school,” part of a social reform movement started in England in the 1880s. Its philosophy was adopted in America in the form of settlement houses and schools that provided education, recreation, and other services to people in need, predominantly immigrants. The most famous example in the United States was Hull House in Chicago, run by Jane Addams.
Music education played a major role in the settlement movement, and several music settlement schools continue to this day. For the founders of The Hochstein School, the settlement model made sense as a way to serve the community’s needs while also paying tribute to David Hochstein’s immigrant roots.

The Hochstein School’s first director was Howard Gleason, George Eastman’s private organist, who was also the first head of the organ department at the Eastman School of Music (which was founded in 1921, the year after the Hochstein School). Gleason’s experience as the director of the Boston Music School Settlement was of particular interest to Eastman when they first met.

The Hochstein School grew, adding students and curriculum, and moved to a new location on Hoeltzer Street in 1928, where the school remained for the next 50 years. The relationship with Eastman School of Music continued as both institutions developed.

October 1959: With the initial reasons for the school’s founding faded into history, and funding being an ongoing issue, The Hochstein School faced a crisis: Did it still have a reason to exist?

“They had felt that they were no longer serving the initial immigrant population that they had served — because a lot of those families that initially had come from Europe, that had lived in Joseph Avenue and that lived in the city, had all moved out to the suburbs,” Palmer says. “So they felt as if they were serving people that could afford to pay for lessons, and at the same time, they were not serving those that most needed to be served.” 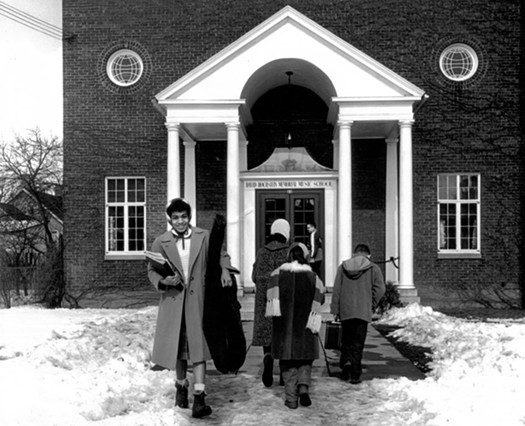 Board President Hilda Taylor wrote to Howard Hanson at the Eastman School of Music for guidance in 1959: “We would further appreciate an expression of your personal opinion as to whether a discontinuance of Hochstein would deprive the community of any substantial service which is not already provided or reasonably available.”

Hanson replied with advice and encouragement to press on, writing:  “The importance of the contribution of the Hochstein School to music in Rochester over the years has been so great that it would seem a shame to see that contribution discontinued. Perhaps we can find a philosophy which will adapt the organization of the school to the new conditions which it now faces.”

The school responded by adapting to the changing community and growing their programs. Conductor Paul Freeman was hired as the school’s first full-time director in 1960, and he oversaw an expansion of programs that included music appreciation lectures and other opportunities for adults.

Over the next few decades, new subjects including jazz, early childhood music, and dance were incorporated into the curriculum. The school held outdoor community concerts, and organized a Summer Arts Camp in 1968, bringing together 2,400 students from throughout the region — representing 16 social service agencies, including five settlement houses.

In a time of increased awareness of the racial and social divisions in Rochester following the riots in 1964, this summer program was praised for bringing youth together in an article by Democrat & Chronicle columnist Cliff Carpenter, titled “Integration at its Best.” 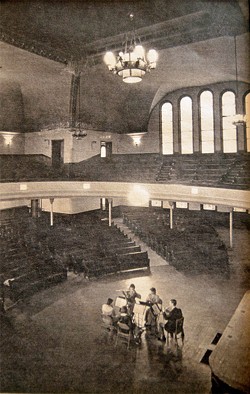 The Hochstein School moved to its current location on North Plymouth Street in the former Central Presbyterian Church building in 1975, at first as a tenant, before purchasing the building for the sum of one dollar. This storied location adds to the sense of Hochstein’s connection to Rochester’s history.

“We sort of feel as if it were on hallowed ground, and the underground railroad history, and the history of Frederick Douglass and Susan B. Anthony sort of dovetails nicely with our mission and everything that we do,” Palmer says.

The music therapy program at Hochstein was first developed in collaboration with Nazareth College in 1976, and it still flourishes, with expressive arts programs in music, art, and dance therapy that serve clients both at the school and in agencies throughout the region. 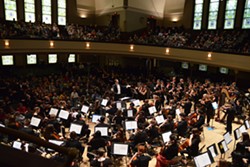 Lunchtime concerts, first called “Noontime at Hochstein” began in 1975, with flutist Glennda Dove and pianist Joseph Werner. Two years later, WXXI began broadcasts of these concerts, which continue to this day as “Live from Hochstein” (which I host for WXXI Classical 91.5, a media partner of CITY Newspaper).

Hochstein continued to develop its outreach programs, expand the use of its hall as a venue for concerts by other arts presenters, and build its ensemble program with chamber music groups and several choruses, bands, and orchestras. You can also now play in rock bands at Hochstein, learn about the connection between creating comics and music, play ukulele or banjo, and take classes in music technology, in addition to traditional classical music and jazz studies.

April 2020: One hundred years after its founding, The Hochstein School continues to serve the community through music education and the tuition assistance program that ensures that all can participate, regardless of ability to pay. The school continues to look for new ways to reach the community, as a participant in ROCMusic at neighborhood community centers and other programs.

The current executive director Dr. Peggy Quackenbush has been with the school since 1979, as a teacher, administrator, and then as director starting in 1991. She presciently described the continued importance of The Hochstein School’s work in an interview earlier this year.

“It’s such a big need for so many people right now,” Quackenbush said. “The need to find a mode of expression, the need to get input from other people in a different kind of way, in a way that music or dance can give us. This is the engagement that everybody in our society really longs for. We are at risk of becoming too isolated, and this kind of activity is powerful in how it helps us to relate to each other and the rest of the world.” 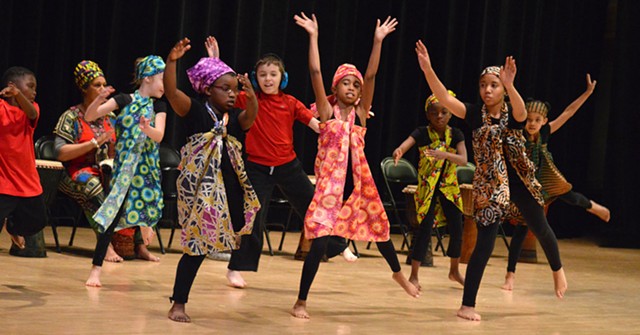 You can find more stories from The Hochstein School’s rich history on its website, hochstein.org/Our-100th, and join in the virtual centennial celebration on April 5 at 2 p.m., here: facebook.com/HochsteinSchool.

This article has been adapted from a forthcoming radio documentary about The Hochstein School, to be broadcast on April 8, at noon and 9 p.m., on WXXI-FM Classical 91.5.