The history behind Brighton's 'No Draft' graffiti

While Defacer Eraser, Rochester's graffiti removal operation, buffs walls soon after they're marked up, graffiti tends to stick around on trains and other railroad property. Railroads choose to invest in structural maintenance rather than cosmetic considerations. And this is why, for 35 years, the well-known "NO DRAFT" graffiti, accompanied by a peace sign and the word "peace," has remained on the CSX railroad bridge that straddles a dip in Penfield Road at the edge of Brighton.

"We focus our resources on the structural integrity of our infrastructure," says CSX spokesperson Rob Doolittle. "We do not emphasize the aesthetics, unless something is patently offensive, which we try to take care of as quickly as we can." Doolittle defines offensive graffiti as profanity or slurs.

The anti-draft graffiti isn't a uniformly unwelcome sight. It's been repeatedly shared over social media by those who think it's an important artifact of local history. In some cases, it's been used as a stumble-upon teaching tool. 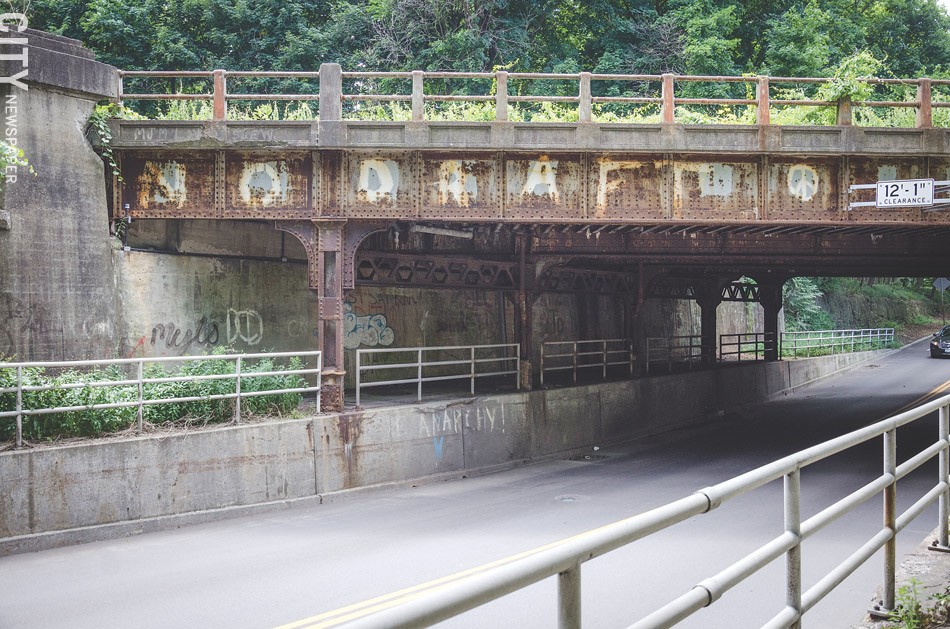 "I grew up around the corner from it," says musician Brian Barrett. "I remember asking my parents what a 'draft' was because of it."

Often assumed to be a relic of the Vietnam era, the all-caps plea was actually created by a circle of friends in the wee hours of a 1981 summer morning. The group took turns painting the letters by lowering one another from the bridge using rope harnesses.

While they were painting, a police cruiser spotted them, flashed its lights, and the group scattered into the night. They returned a day or so later to finish.

The graffiti was "triggered by the draft coming back on the books in the spring of 1980," says arts activist and developer Doug Rice, who was part of the group of young vandals.

The draft had been eliminated by 1975 as the Vietnam War limped toward an end. But in response to the Soviet invasion of Afghanistan, President Jimmy Carter signed a July 1980 reinstatement of Selective Service registration for all 18- to 26-year-old male citizens — nearly four million young men — born on or after January 1, 1960.

Musician and massage therapist Frank Boehm was one of the graffitists, and provided the paint and equipment for the operation. Born in December 1959, Boehm was exempt, but many of his friends were not.

Though the US wasn't currently engaged in a war, Vietnam was a fresh wound on a lot of young minds, and America's aggressive foreign policy was ever-present. People were understandably on edge.

"For me, the tone was largely a feeling of powerlessness," Boehm says.

Another member of the group, a teacher, writer, and musician currently based in San Francisco named Stardust — then known as Willie Doherty — was a freshman at Massachusetts Institute of Technology, where ze helped form Mass Open Resistance, an organized support and legal aid group that constructed a nationwide network for conscientious objectors who refused to register for the draft.

During Stardust's time at MIT, an early version of the Solomon Amendment was passed, withholding federal financial aid from eligible men who did not register, and ze had to figure out how to fund the remaining semesters.

While home visiting, Stardust and others who had attended Penfield High School together were discussing the political climate, and cooked up the caper. The bridge seemed like a high-impact spot for a statement. A few friends were stationed at the light down the road and would clap if a car approached.

They didn't expect the graffiti to last this long. "We were sure it was going to be sandblasted or erased within the next few days," Boehm says.

Neither did they detect a buzz about the graffiti in the following days or years. "There was no social media at the time; it was a whole different world," Boehm says.

Behind nearby Temple Sinai are fields where young people would hold their own congress among concrete drainage tubes. After school, after chores and other responsibilities, they'd meet up and talk until dusk. The discussion would sometimes turn to who could be drafted.

"The whole mood of teenagers these days is different, they're all sitting around in their houses with their computers and cell phones," Boehm says. "But the bigger picture, the world's problems, haven't changed."

The "NO DRAFT" graffiti was created when the reinstatement of the draft seemed possible. Today, registration is still compulsory, and warfare is perpetual; it's not hard to imagine that conscription could return.

Congress has recently approved some upgrades of the legislation to include women in compulsory registration. If the law is passed, girls who are currently 16 years old would be the first wave of registrants when the law goes into effect. By and large, these teens are not politically active, and cannot participate in forming laws that will directly impact them.

"They're targeting people who are underage and may not understand," Stardust says. "I think they're counting on not having opposition from adult women who might know better," and who the law won't apply to. "What we need is a larger movement of people, adult people of all genders, opposing these policies."