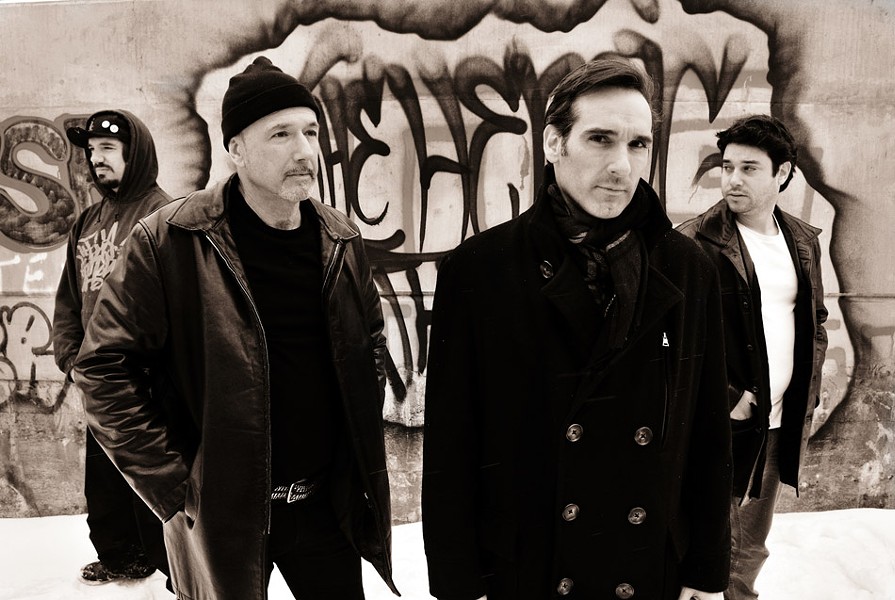 Born barely one year ago, Rochester's The Heroic Enthusiasts fall between genre cracks, it's rock 'n' roll twilight. The band — James Tabbi, guitar, Tom Ferrara, guitar, Jesse Herrera, bass, and Cruk Fua, drums — is more about the antithetical than the quintessential. The songs are melodious meanderings full of a loosely harnessed energy and an abstract antagonism. And it sounds good, it's a trip you ought to take.

Where every decade holds claim to specific musical ideas, artists like The Talking Heads, Lloyd Cole, Echo and the Bunnymen, REM, or The Cars, borrowed from and simultaneously smashed these chronological restraints. It's this maverick ideal that The Heroic Enthusiasts adheres to, as well. For those clutching wildly in the air for something — anything — familiar, indie rock and alternative, as hackneyed as those labels have become, are relatively accurate in describing this interesting quartet.

The songs the band has laid down so far are beautifully atmospheric with a simple push and pull dynamic between the head and the feet; you'll want to listen and decipher and understand, but you'll also want to cut some rug.

Tabbi and Ferrara stopped by to discuss shunning formulas, not being major or minor, and the evolution of a band. An edited transcript follows.

CITY: How did The Heroic Enthusiasts come to be?

James Tabbi: We had worked together on a few musical projects previously that never really took off. This time the stars seemed to align. We got together at a time we were both creatively ready, willing to focus. The idea for the Heroic Enthusiasts ... we first got together, a lot of stuff poured out about relationships and love and I happened to be reading Giordano Bruno at the time and he wrote a piece called the Heroic Enthusiast — which ended up getting him executed. He's experiencing a resurgence now thanks to "Cosmos."

Is his demise a metaphor as to where the band is going?

Tom Ferrara: I think it's a reverse analogy, what we were trying to do was music that's new but also connected with the people left hanging there, who were into music in the 1980's and 1990's, that aren't into what's going on now, who wanted something fresh, not totally replicative of what went on in the 1980's and 1990's. People hear us and they say "I hear some Doors in there," this and that. But to me it's the songs. We've written 15-16 songs since January of last year and we're already evolving.

Did you have any outside help?

Ferrara: We contacted mixing engineer and Rochester native Mick Kawalski [Daft Punk] and he stressed more work be done on our arrangements. We listened to his suggestions and we've written seven songs since then, and I think our arrangements are much better now. We have developed this sort of signature atonality that rings though our songs; not major or minor, but just out there.

Where do The Heroic Enthusiasts fit in the whole musical scheme?

Tabbi: There's a lot of good stuff going on for the moment; the Americana movement, there's great stuff coming out of Brooklyn ... what we're doing is looking at that, respecting that, at the same time bringing the fact that we've lived 20 or 30 years more than a lot of people writing these songs. And I feel we have a lot of insight to add to the songs.

So what is it? What do you call it?

Tabbi: It's alternative, indie music, that's what it is. There's no new modern classification for it. When I think about what we're doing, the sound that we're creating ... if I had to make some parallels through history it would be like Echo and the Bunnymen, Radiohead, Coldplay. There's a common thread through a lot of that guitar pop. We know and lived those decades musically and physically, so we draw on all that history.

It's not the sweet and creamy appeal you associate with pop.

Tabbi: No, it's a little darker. It's not fluff pop and we're really not that formulaic.

But you have a formula to your writing, right?

Tabbi: When we first started writing we purposely gave it the Heroic Enthusiasts approach.

Did you even know what that was?

Tabbi: No, because even now looking back, there are a few songs that no longer fit, that are no longer relevant to what the band has become. They were early tries at getting a sound.

Are you there yet?

Ferrara: We're heading in the direction we want to be. We don't have any delusions about being rock stars. But this is the best, most creative, most focused project I've ever worked with.

What do you think it will evolve into?

Tabbi: At our first gig, people came up to me and said, 'I felt like I was listening to something for the first time, something that was going to be something."

Ferrara: It feels like something that could be wildly popular, but we're not worried about that, that's not our goal.

Is that important to an audience that may be there just to drink beer and dance?

Tabbi: This blew me away; when we played our first show, the songs I wrote that I thought were dark, people were dancing to. So I went back and listened and it was like, 'Yeah, these are fun, danceable songs.